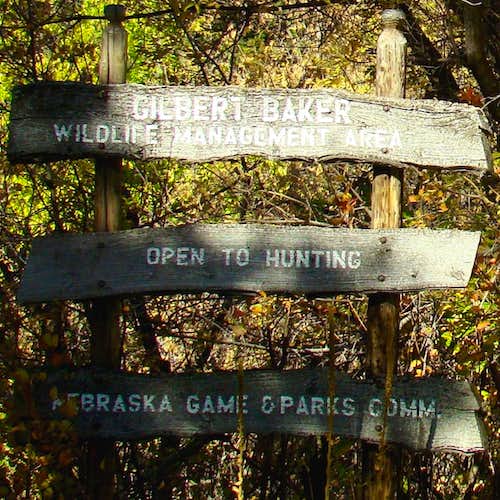 One of the most beautiful areas in Nebraska that has remained relatively unscathed by fires and development is the Gilbert-Baker Wildlife Management Area (WMA), located in northern Sioux County. It probably helps that this spacious county has a population density less than 1 person per square mile. The wildlife area is centered on Monroe Canyon and is characterized by the central canyon and surrounding ridges, branch canyons, buttes and peaks covered in ponderosa pine. Cottonwood, green ash and boxelder trees are common along Monroe Creek, which is a beautiful little perennial trout stream that bisects the wildlife area. 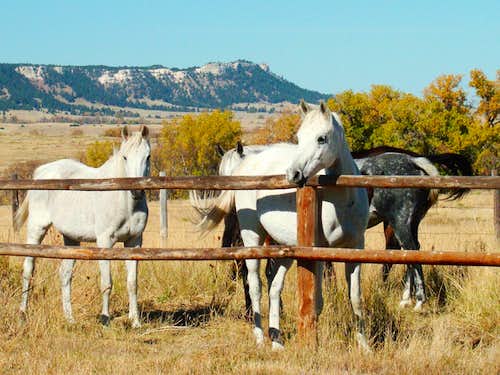 The Gilbert-Baker wildlife area is most popular with hunters, due to the abundant wildlife found here. Deer are the most common wildlife seen. But elk and wild turkey hunting is also popular. Mountain lions are spotted here occasionally, but there have been no problems to-date. Anglers enjoy the trout fishing in Monroe Creek and the Gilbert-Baker Pond, which was stocked again in the fall of 2016. Bird watchers also travel to this wildlife area because this is the only documented location in the state for Pinion Jays.

The 2,537 acre Gilbert-Baker WMA land tracts were acquired in 1942, 1943 and 1955. Unfortunately, there has been some pine beetle infestation in the wildlife area, as well as a few very small fires. But the area is in much better shape than most of the forests of the Pine Ridge, which was so hard hit with the fires of 1989, 2006 and 2012, plus damage from Winter Storm Atlas in 2013. The Wildlife area elevation ranges from 4,400 feet at Monroe Creek on the northern edge of the WMA to over 5,000 feet on several buttes and ridges along the western edge. This wildlife area will probably not be popular with peakbaggers because of the lack of ranked summits. But it does provide great opportunities for quiet wilderness exploration, hiking, climbing, fishing and free primitive camping in a beautiful and a mostly unspoiled setting. The wildlife area is owned by the Nebraska Department of Fish & Game and is managed by their area office at the Ponderosa Wildlife Area. 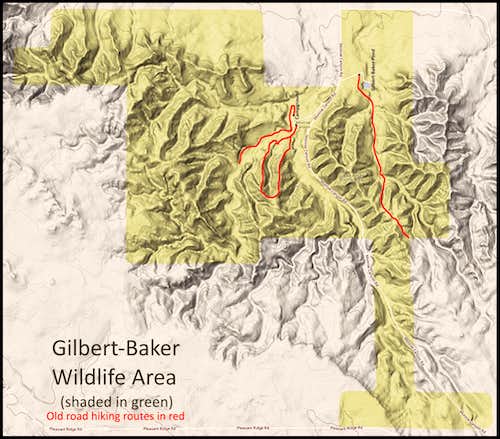 Most of the Gilbert-Baker wildlife area lies in the Warbonnet Ranch USGS Quad, though a small part of the southern area lies in the Harrison West USGS Quad. The National Forest Service Map for the Pine Ridge gives a good general overview of the area. There are no named or ranked summits within the wildlife area, but there are many good climbing opportunities nevertheless. There are a couple of challenging rocky summits about 2-3 miles west-to-northwest of the campground however they are accessible only by an off-trail hike

Several old roads traverse the wildlife area and are marked in red on the map. While motor vehicles may have been allowed on them long ago, they are now only accessible to the public by foot. The map on this page will show the main old routes, though traces of other older roads are also present in various locations. None of the roads are marked in the WMA with anything other than the “No Motorized Vehicles Allowed” signs. For anyone who wants to explore the wildlife area extensively, these old roads will only provide partial access. The one exception would be a ridgeline loop south from the campground. Everything else must be reached by off-trail hiking. The floor of Monroe Canyon, along Monroe Creek, is a rather scenic off-trail hike. There are rocky ridges and summits throughout the wildlife area, with the highest of these are along the western edge. The nearest named summit is The Colosseum, about six miles northwest. The Colosseum At 5,130 feet, this summit is one of the five highest named summits in the state. This was probably a cape when there was an inland sea here. The problem for climbing here is that even though Nebraska GIS Maps show the summit to be owned by the US government, all the surrounding land is private. Of course, this would require some diplomacy with at least one of the three adjacent landowners for permission to cross their property. The Sioux County Courthouse may be able to help with some contact information for anyone who would want to try to climb this rarely-visited summit. They can be reached during normal business hours at: (308) 668-2401.

The wildlife area is open to the public year-around. However, the careful explorer will take into account the fact that this wildlife area is particularly attractive to hunters because of the abundant wildlife population. Fall deer and elk seasons bring many hunters, as does the spring wild turkey season. For more information on Nebraska hunting seasons, you can learn more at this link:

Of course weather can also have a major impact on exploration plans. For the latest weather forecasts and conditions for the wildlife area, click here:

The restriction of greatest concern to state fish & game officials is in regard to campfires. Because of the widespread fire destruction in the Pine Ridge since 1989, an open campfire will quickly earn an unpleasant visit from state officials. All WMA rules are posted at the campground. If you are fishing for your dinner, you will need a valid fishing license. 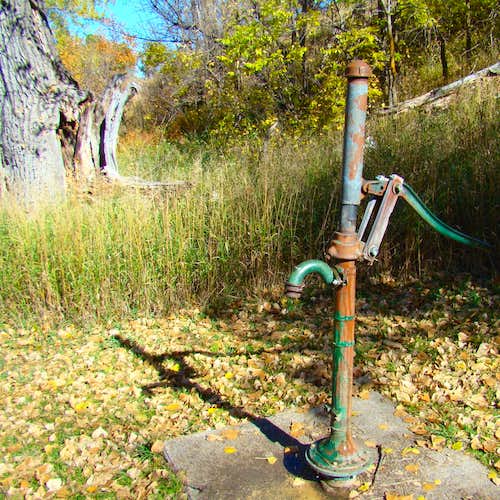 Remarkably, camping is free at the Gilbert-Baker wildlife area. Of course, this is primitive camping with no running water and limited sites. The sites are available on a first-come, first-serve basis. There is an old hand-pump well and a vault toilet. But there is no lighting and no campfires allowed. For whatever reason, there is a stone fire ring at one of the camp sites. However, unless the state relaxes their “no campfire” rules, it’s better not to risk a hefty fine. These are factors to be considered when making plans to camp here. 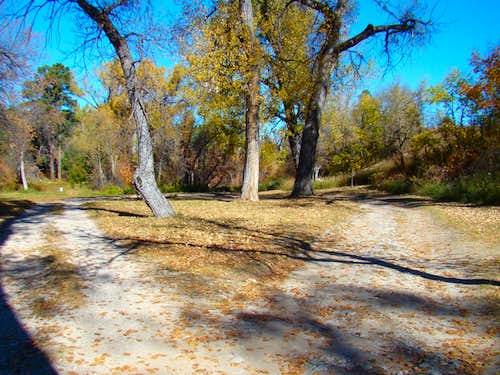 If you like fresh trout, fishermen do occasionally catch them in Monroe Creek and at the Gilbert-Baker Pond .2-mile north of the campground. For more information on camping here or any other WMA-related questions, you can contact the Ponderosa WMA at (308) 665-2924. If this campground is full or if you prefer more options, Fort Robinson State Park and the Soldier Creek Wilderness are just 30 minutes east on Highway 20. They have a broader range of camping options plus some lodging available. You can reach Fort Robinson by phone at (308) 665-2900. For information on Soldier Creek Wilderness camping, you can call the Nebraska National Forest Office at (308) 432-0300.

You can also access the Fort Robinson website and the Soldier Creek Wilderness site at the links below: