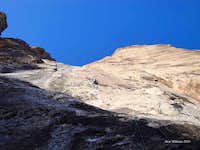 On the northeast corner of Rainbow Mountain, at the entrance to Juniper Canyon, lies the Wall of Cracks (Crimson Chrysalis and Cloud Tower). Immediately to the southeast of this juncture in Juniper Canyon is Ginger Buttress (white tower attached to the east face of Rainbow Mountain). Ginger Buttress consists of a collection of mostly moderate routes the most popular of which are Ginger Cracks (5.9) and Unimpeachable Groping (5.10b). The buttress forms a triangular tower of sorts with a few stepped faces nearing its summit which forms a cool notch between it and an adjacent taller wall to the west. Only two routes reach this notch, Ginger Cracks and Unimpeachable Groping thus why they are the most popular routes on the buttress.

Unimpeachable is actually a rare (by Red Rocks standards) multi pitch sport climb and Ginger Cracks is a trad climb with mostly fixed stations. Neither are overly long thus these routes make for decent winter ascents as long as the temps are reasonable. Any routes on the right side (north) of the buttress (i.e. Ginger Cracks) do not see sun during the short winter days.

The approach for this buttress, as for other routes in Juniper Canyon, can start either at the Pine Canyon trail head or Oak Creek trail head off the Red Rocks loop road. For Ginger Buttress, I prefer the Oak Creek trail head version. Oak Creek is the last trail head option on the Red Rocks Loop Road. Drive down a long gravel drive to the parking area. Use the trail heading out of the corralled parking lot to the north aiming for Juniper Canyon. Follow the trail as it meanders northwest towards Rainbow Mountain. There are a variety of options, but it is more direct to not cross the Juniper Canyon wash, but rather turn left at some point and head for the bushy ramp that leads to Cloud Tower. Once on the ramp gaining elevation and almost to the col, turn left on a faint trail heading up to the north end of Ginger Buttress. 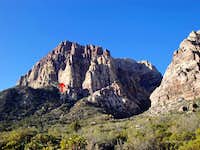 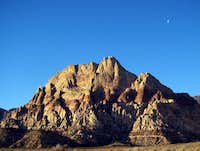 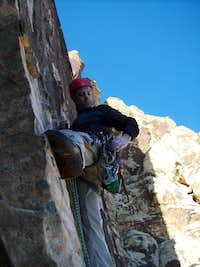 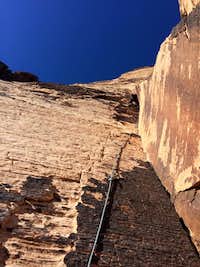 2nd pitch, All You Can Eat 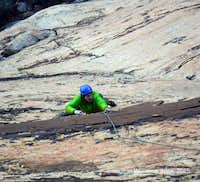 4th pitch, All You Can Eat