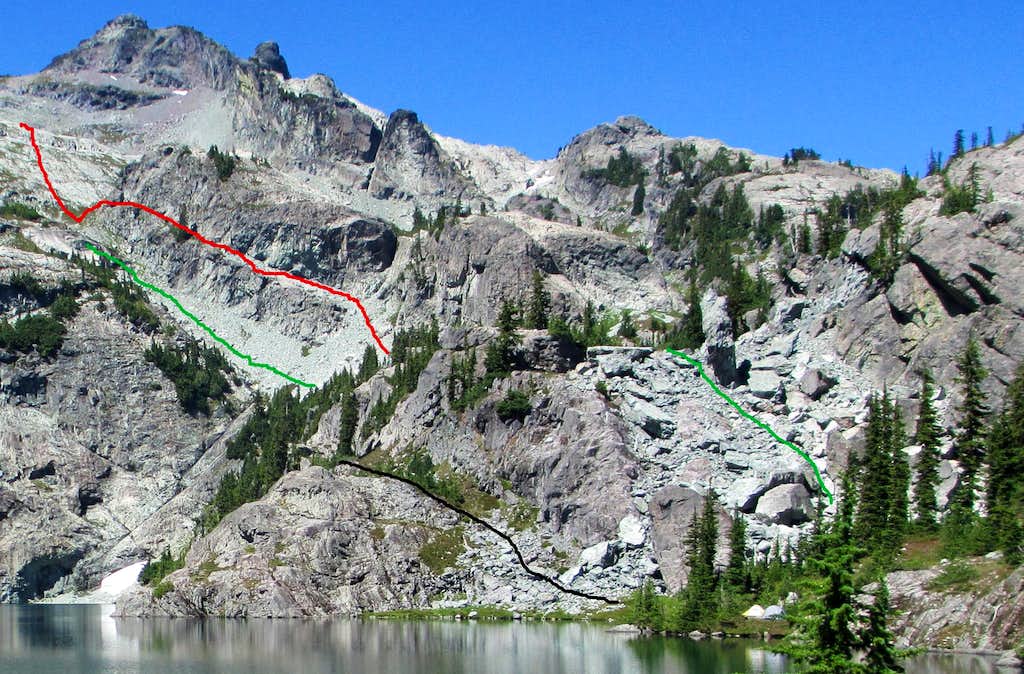 The green lines are for the Glacier Lake Route up Chikamin Peak. The picture only shows the route up to the slabs below the Four Brothers/Chikamin Peak saddle. The Glacier Lake Route requires you to hike counterclockwise around Glacier Lake, before ascending the boulderfield to the lower right (lower green line to the right) to get above the lake. The small boulderfield shown with the black line leads to a dead end. You will cliff out - trust me! Above the boulderfield the route ascends a loose talus slope, shown with the second green line, before reaching the solid slabs high up in this picture. These slabs lead to the Four Brothers/Chikamin saddle. I used the "ramp" shown with the red line to ascend to the slabs. The line shows my approximate route. I used the ramp as it was not as loose as the talus slope, which I confirmed while descending. However, there is a ledge, that I estimate being about 4 feet high near the top of the ramp, and I remember it being an awkward climb getting up this move, which I'd rate at Class 3. Shortly after that move there is short descent of maybe 10 feet down a gully to get back to the standard route just below the slabs. I am not recommending using this ramp; just stating that it can work for ascending. Glacier Lake Route Chikamin Peak August 31, 2013
« PREV NEXT »