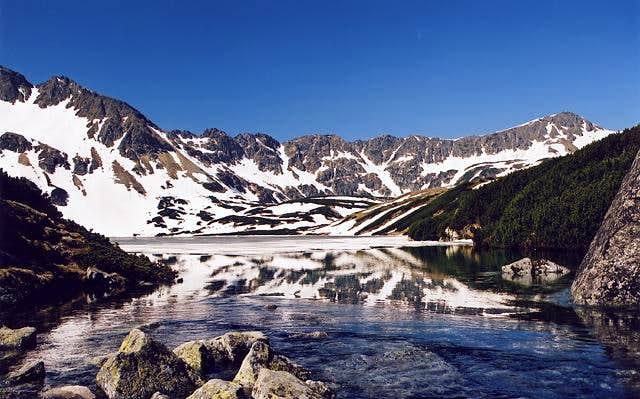 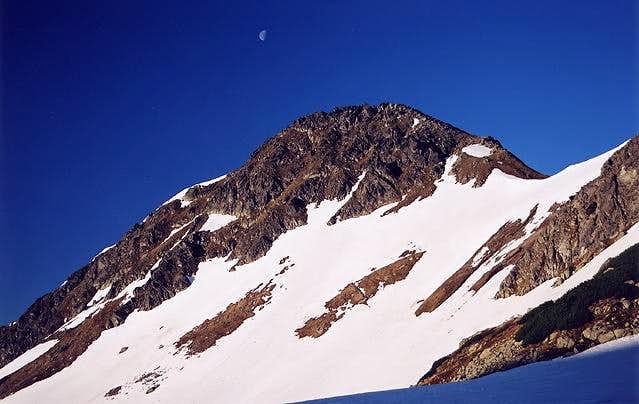 Gladki Wierch(2065) Ridge culmination between Gladka Przelecz Pass(1994) and Czarna Lawka Pass(1969). It rises above the valleys of: Five Polish Lakes’(Polish side) ,Ticha and Koprova(Slovak side) and sends towards south-east a lateral ridge in which rise Liptovske Kopy peaks divided from Gladki by Zavory Pass(1876). In good old days before II World War Zavory saddle had a great importance for all Tatra tourists because one of the most popular,historical trails from Zakopane to Morskie Oko lake led through that pass. Gladka Pass is the easiest connection between northern Five Polish Lakes’ Valley and great Cicha and Koprowa Valleys on the southern side of Tatras, known for centuries … In dark years of war Gladka Pass was often used by partisans and couriers and for many fugitives it was real “gate to freedom”. In 1911 Maria Sklodowska-Curie was crossing the saddle. Favourite animal migration trail: Bears (in spring), deers and lynxs. First known tourist crossing the pass: 1827 – Albrecht Sydow and guide First winter crossing: 1910 – Julia Zembatowa and Jozef Lesiecki (on skis)

First of all You have to get to Zakopane town on Polish side of Tatra Mountains – very good communication links with Cracow City and the rest of Poland. There are numerous bus and train connections between Zakopane and Cracow City(100 km), where the nearest inernational airport is located. Cracow Airport PKS Cracow – Zakopane bus departures PKP - Polish Railways connection search PKS Zakopane - buses Then You should get to Dolina Pieciu Stawow Polskich (Five Polish Lakes’ Valley). There are a few possibilities of getting there like hiking from the town to Hala Gasienicowa and then climbing through high passes of Zawrat(2159) or Krzyzne(2112) (popular marked routes) being the enter to famous “Five” but the most common way of getting there is to take a bus from Zakopane to Palenica Bialczanska (the same as on the way to Morskie Oko) and start hiking from there altogether with road going to Morskie Oko lake but only to Wodogrzmoty Mickiewicza waterfalls after which You turn right into beautiful Dolina Roztoki Valley which will lead You to the threshold of Five Polish Lakes. On Slovak side of Tatras You should get to the tourist center of Strbske Pleso and then to Podbanske at the entry to Ticha and Koprova valleys.

There are no marked routes to the summit of Gladki Wierch. The only marked route (red marks) goes on the Slovak side reaching the saddle of Gladka Pass – from there about 10-15 minutes to the double summited peak. From Five Polish Lakes’ Valley Gladka Pass is ascended by well seen serpentines of old trail from the eastern end of the valley near the shores of Zadni Staw Polski Lake (you go east from the chalet through the whole length of the valley by marked trail till it turns right and climbs Zawrat Pass, you continue straight to well seen grassy slopes under Gladka Pass and so on – “Five” Chalet – Gladki Wierch is about 1 ½ h in summer conditions.

There is Tatra National Park on both sides of the border – Polish TPN and Slovak TANAP Watch out for Tatra National Park alpine climbing and hiking restrictions. Stay always respectful to mountain nature! On 21.12.2007 Slovakia along with Poland signed Schengen Agreement and accessed
to "open borders" Schengen Area, however one must remember that National Park regulations prohibiting crossing the border beside marked trails in the whole area
remain in force.

You can climb/hike all year round. Theoretically the best weather conditions: August – October In June-July frequent t-storms. In winter usually serious avalanche danger and dangerous cornices on Gladka Pass (2005: till early June) March – May – the best ski touring season (depending on avalanche conditions)

The best base when planning climbs or hikes in the area of Five Polish Lakes’ Valley is definetely Five Polish Lakes Mountain Chalet situated upon shores of Przedni Staw(1669) (Front Lake). It is the highest located mountain chalet of Poland at the altitude of 1671 meters. Exploring Gladki area from Slovak side may be a bit problematic because of serious distance from tourist centers. The closest one is Podbanske -small ,quiet and calm place (about 16 km from Strbske Pleso) with rather little choice of accommodation possibilities and poor bus communication (it’s hard to get back to Strbske Pleso in the afternoon even in the summer season). There is a huge 4 Star Hotel Permon in Podbanske . Camping in Tatra National Park is strictly forbidden.