Glaramara is a fell in the Borrowdale area in the Lake District. It forms the northern end of a long, wide, undulating ridge. To the SSW, the ridge drops to just over 660m at High House Tarn, a little more than a kilometer away, before rising again to Allen Crags (785m) another kilometer further.

Arguably, the summit views to the north are the best. On a good day, you can see Derwent Water, Keswick and Skiddaw, the fourth highest summit in the Lake District. 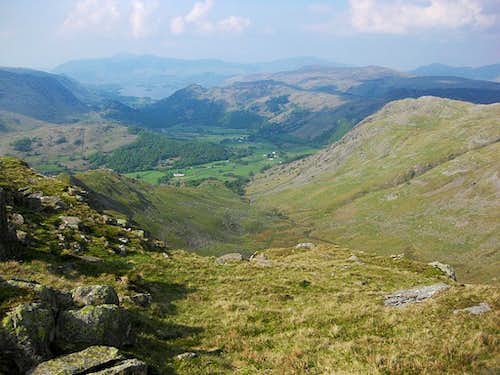 View to the north on a somewhat hazy day
At 783m, by elevation Glaramara is the 45th of the 214 Wainwrights, so named after Alfred Wainwright who wrote extensively about the Lake District.

The nearest trailhead is Seathwaite Farm, at around 130m. With only 650m to go to the summit, most hikers combine it with one or more other fells, especially Allen Crags.

On the northern slopes of Glaramara, 1km from the summit, Raven Crag offers a number of rock climbing routes, the best known being Corvus.

From Keswick, bus 78 serves Rosthwaite and Seatoller. From Seatoller it's 2km to Seathwaite, from Rosthwaite 4km (you can take the public footpath from Strands Bridge). Unfortunately, the first bus doesn't go very early and the last one isn't very late, so if you plan to do more than Glaramara and Allen Crags, you'll have to be fast or spend more than a day in the area.

Glaramara (left) and Seathwaite Fell from the trailhead at Seathwaite Farm. On the slopes of Glaramara, the trees in the gully betray the presence of a little mountain stream, the Hind Gill. That gully is also the direct route to Glaramara.

The Ordnance Survey map shows the direct route from Seathwaite
There are three popular routes to the summit.
A much longer but interesting option is to start with Glaramara, continue to Allen Crags, and then keep going, over Great End and beyond to Scafell Pike, England's highest. There are several ways to get back without having to retrace your steps, for example via Styhead Pass. 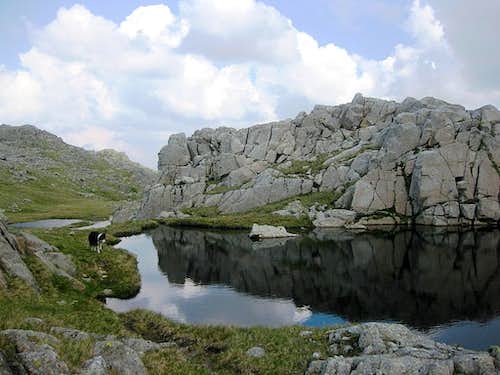 A tarn on the ridge between Allen Crags and Glaramara

Although the Lake District is a National Park, there is no red tape.

Don't expect big crowds, but from spring through fall, if the weather is good, there will be a few other people. With snow cover or in poor weather, it can be a lot more serious. This area sees a lot of precipitation!

The Lake District gets a lot of visitors and there are many places to stay, in all price ranges. A small selection:

Officially, camping wild is not allowed in England. Unofficially it's fine, provided you stay well away from cultivated lands and leave no trace.