Glad to be back

Glen Sannox in the north of the Isle of Arran, holds good memories for me. Nine years ago, I walked with my friend and climbing partner Russell up near the head of the glen on a bright, warm day. We'd loosely planned to do some climbing on the slabs there, but with a late start and my wife and sister due on the ferry from Kintyre at 2 p.m., we settled for a stroll in brilliant scenery, spotting an adder on the way back down.

The day before that, Russell and I had climbed South Ridge Direct on Cir Mhor, whose north face soars in constant view from Glen Sannox, on my first climbing trip to Scotland, and my first climb with him. We held each other on leader falls on a variation toward the top. We've climbed or scrambled every visit since, except for this one, when weather and plans dictated we just visit with him and his family for a day-and-a-half. Even got a day of North Carolina climbing at Moore's Wall when he and his wife brought their three daughters for a few days' visit during a trip stateside in 2006.

I notice as I'm walking down, after visiting a couple of Glen Sannox peaks, that I'm wearing the same pants, the same boots as I had been in 2002. A lot else has changed--my father's death later that year from pancreatic cancer; the sudden death of my friend of 33 years and literal compadre; a new job with a start-up; and some "life adjustments."  Those and other changes came to mind as I neared the end of my day out, along with the clarity of how I felt about those musings that always comes with sky and mountains overhead, feet moving and far from any sign of pavement.

Yes, it was good to see Glen Sannox again.

The ferry left at 8:50 for the half-hour crossing. While the sun shined on the ferry, the Arran tops were shrowded, though I could see the deep slash of the Ceum na Caillich (Witch's Step) in Glen Sannox's northern ridge.

My plan was to enter the glen from the town of Sannox climb Suidhe Fharghas, follow the ridge south to Casteal Abhail and on to Cir Mhor, and drop back down to Glen Sannox from the saddle between Cir Mhor and Goat Fell.

A local physician on the bus told me of an alternate route, talking the North Glen Sannox footpath, which follows a burn a couple of miles north of Sannox itself before striking up a west-facing ridge to Casteal Abhail, therefore bypassing the Witch's Step, low-fifth-class downclimb if taken directly. I'd hoped to get some scrambling in, but with concerns about time (I had till 5:30 to catch a bus to the last ferry) and the thought that downclimbing fairly easy--but death-fall--slabs in my Makalus might not be the best choice for my first rock-climbing in a while, I was glad to try North Glen Sannox, which had the benefit of avoiding the boggy lower portion of the main glen at the start of the day.

The bus conductor (yes they have them, there) took a look at me and said, "Ah, a wild rover." I told him I'd been one for "many a year." He seemed pleasantly surprised I knew the song, and said he'd spare me the whole rendition, "that'll have to wait for the whiskey and beer" I replied. Good fun.

I asked the driver to stop at North Glen Sannox, where I started up the path at 10:20, passing along a burn broken with intermittent waterfalls. With its proximity to sea and mountains, I've always loved that one's rarely far from the sound of water in Scotland. The sun was bright, but clouds still gathered on the peaks as I left the trees and started up a fainter trail that accessed the "access ridge" after crossing the burn.

I stopped for a quick break and talked to a group from Durham--two men, two teens and two dogs--planning on the same route as I, but descending Cir Mhor to the south down Glen Rosa to the town of Brodick.

At noon, I stopped on a plateau before the final slope to the ridge for a sandwich, apple and a sweet. I'd had only cereal for breakfast, and definitely needed to refuel. After a nice break I continued up the steepening ridge, arriving on the summit of Casteal Abhail at almost 1 p.m.

The weather was changing, with a strong southwest wind starting to shroud Cir Mhor, but Goat Fell still glowing for the moment under sunlight. It started blowing rain, which quickly turned to sleet and snow--gotta love Scotland in May. I nattered around the summit of Casteal Abhail, taking photos and videos.

The snow and sleet continued as I descended then ascended the ridge from Casteal Abhail to Cir Mhor. I stopped a couple of times for photos, and the precip stopped, though the sky remained overcast and a chill wind blew steadily. I came across the Durham group just before Cir Mhor's summit, topping out at 2 p.m.

I relaxed on the summit for a half-hour, talking with two French climbers. There's a footpath, steep but easy, off the summit, but I decided to drop down to the saddle directly, which looked to have some handwork involved along the way. The two climbers had left a bit before me. In the bottom half, the French fellows held up at the base of a mildly technical section and asked if I wanted a spot. It was two steep grooves separated by a small ledge and totaled probably 30 feet. I told them I thought I'd be okay, but thanks all the same. It ended up a little spicier than it looked, and there was steepish ground below the section, but I managed fine, and it was good to actually have to make some moves.

A guy approaching from the saddle asked me why I went that way instead of the path. I joked, "Oh, there's a path?" and confessed I'd just wanted a little scrambling in my day. He and his partner poked around some up that way, but ended up turning around.

The sun was back out by the time I reached the saddle, so I stopped to shed some layers. 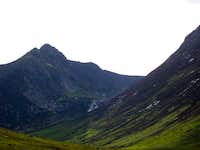 I started down to Glen Sannox from the saddle around 3:30. The intermittent path was the crux of the day for me. It drops down a headwall taking the way of least resistance, which often involved sloping, mossy rock running with water above unappetizing landings should one slip. Quite the quad punisher as well, even on the good bits. It's one of those routes that if there were any other way to go one would. Took less than half an hour but seemed longer.

The sun was very bright by now, so I tucked my bandana under my hat to shade my neck, and cruised on down the glen, stopping along the way to talk with a guy doing trail maintenance work, and on down memory lane. The final part of the path is pretty boggy, but I had Cir Mhor over my shoulder until a final turn in the glen just above Sannox.

At 5 p.m., I was back to the A-841 and the bus stop. I had time to spare, so I strolled up and down the road looking for seals until the bus arrived at 5:48. Chatted with two nice young women from Glasgow on holiday, who were on their way to a camp site at Lochranza--they asked if I was Canadian, no I'm a Yankee, I said. Took the ferry at 6:20.

It was my first real day out in a while, and it satisfied.