It had been over a decade since I last went backpacking with my Dad.  After nine years living on a sailboat he was back on the main land and wanted to spend a couple nights in the wilderness.  Looking for some relatively easier options I came up with a trip to the Goat Rocks.  It had also been over a decade since I last visited the Goat Rocks so it seemed be fitting to take my Dad there for his first night in the back-country in many years.  We originally planned the trip around Labor Day, but the forecast deteriorated rapidly as the time drew near so we decided to delay the trip two weeks.  It couldn't have worked out much better.  We had nearly perfect weather forecast and on the morning of September 15th, 2016 I met my Dad at the Berry Patch trailhead at around 7:50.  By 8am we were hiking up the Goat Ridge trail!
The going was slow.  The trail was a nice gradual incline through a lovely forest.  Being my Dad's first trip in a long long time we weren't out to break any speed records, rather we took our time going up the trail chatting, catching up, and resting frequently.  We caught a few glimpses of the Goat Rocks peaks and soon the trail ducked behind the west side of Goat Ridge. 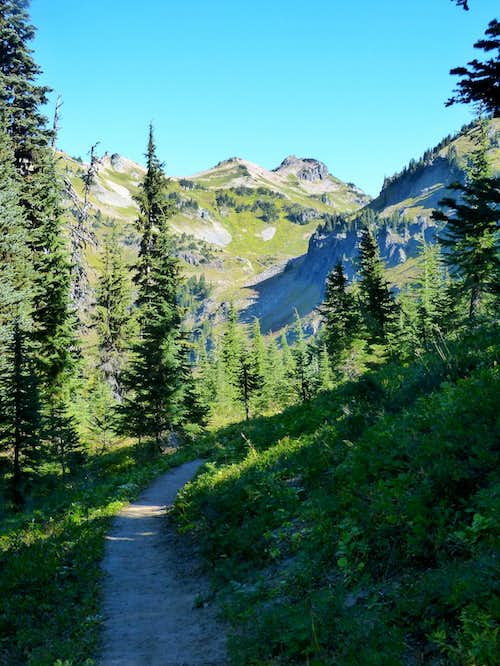 Goat Ridge Trail to Jordan Basin
The basin was beautiful with several places to camp.  This would have made a lovely place to set up camp, but our goal was Goat Lake so we continued on.  A couple switchbacks later we were at the pass and the views of Old Snowy, Ives, and the Goat Creek basin were quite impressive.  As we made our way down the trail towards Goat Lake, Mount Adams came into view, beautiful as always.

Goat Lake Trail Pano
Nearing the lake we passed a section of wild flowers.  Visiting the area in September it was well past peak wild flower season, but this section of about 100 feet of trail was alive with wild flowers and the buzzing of bees.
A short distance later we crested a ridge and Goat Lake came into view!  The color of the lake was striking, a sort of milky glacial blue that was quite pleasing to the eye.  We spotted several potential camp sites and descended into the lake basin where we picked out a spot that offered views of the lake, the Goat Creek basin, and Old Snowy and Ives.  The only thing our spot was lacking was shade.  There were a couple other groups camped below near the outlet stream.  We set up camp, had some food, and settled in.  My dad had had enough moving for the day, but I was in the mood for some peak bagging so I packed up a day pack and departed about 2 pm. 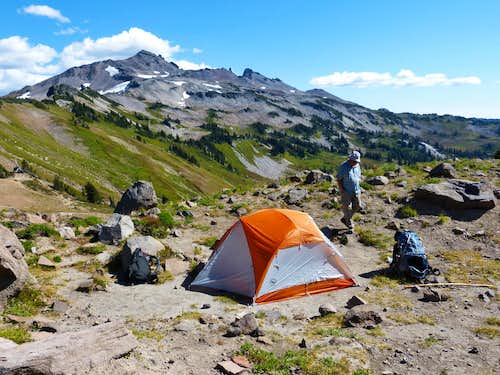 After the casual hike in I was in the mood for some exercise so I booked it up to Hawkeye Point and made it there in about 30 minutes.  The views were amazing!  Goat Lake looked spectacular from above and the views of Old Snowy to the east, Johnson and Rainier to the north, Adams to the south, and Saint Helens to the west were stunning.  I took some photos they eyeballed a route over to Johnson peak, my next destination.

I was hoping to take the ridge directly over but it was too rough.  I would have to descend into the Johnson Creek Basin, losing close to 1000 feet of elevation in the process.  I set off and quickly picked up the trail that descended into the basin, running a good portion of it.  At about 6500 ft I left the trail and began ascending a rib which I crested at just below 7000 feet.  From there I picked up a goat trail that traversed around towards the route I had picked out from Hawkeye.  I spotted some goat fur and caught a whiff of goat.  I looked across to the base of Johnson peak and saw some goats!  Being downwind from me, they saw me probably before I saw them.  I didn't count exactly but there were a dozen or more of them and they basically took the exact route I had eyeballed up to the west ridge of Johnson Peak, a few hundred feet below the summit.  It was interesting that we shared the same eye for route finding up the somewhat cliffy south face of the mountain.  I had fun taking photos of the goats as they made their way up.  They were a good 10 minutes ahead of me and I didn't see them again after they crested the ridge. 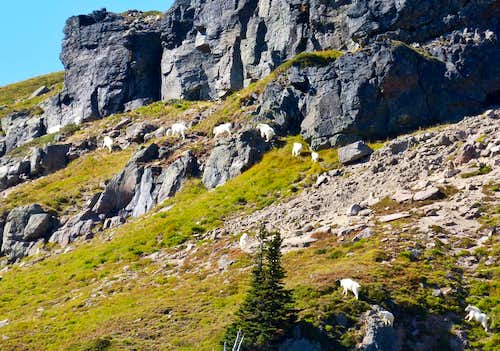 Goat Train on Johnson Peak
The route I picked was class 2+ / class 3-.  Soon I was on the summit of Johnson peak, 1 hour 20 minutes after leaving Hawkeye.  The cliffs off the east face of Johnson were impressive as they dropped 3500 feet down into the basin below.  I took some photos, but didn't stay too long.

Johnson Peak Summit Looking SE
On the way down I decided to drop down a couple hundred feet more in elevation in exchange for picking up the trail, rather than repeat my side hill traverse that I did on the way up.  I made steady time climbing back up the trail, then descended back down to camp at Goat Lake.
I arrived at 5:30, 1 hour 20 minutes after leaving the summit of Johnson.  My dad was just boiling water for dinner.  I joined him and noticed there were 20 or so goats on the slopes to the east of Goat Lake.  We ate dinner and watched the goats, and later the colors of the sunset, before turning in early around 8pm. 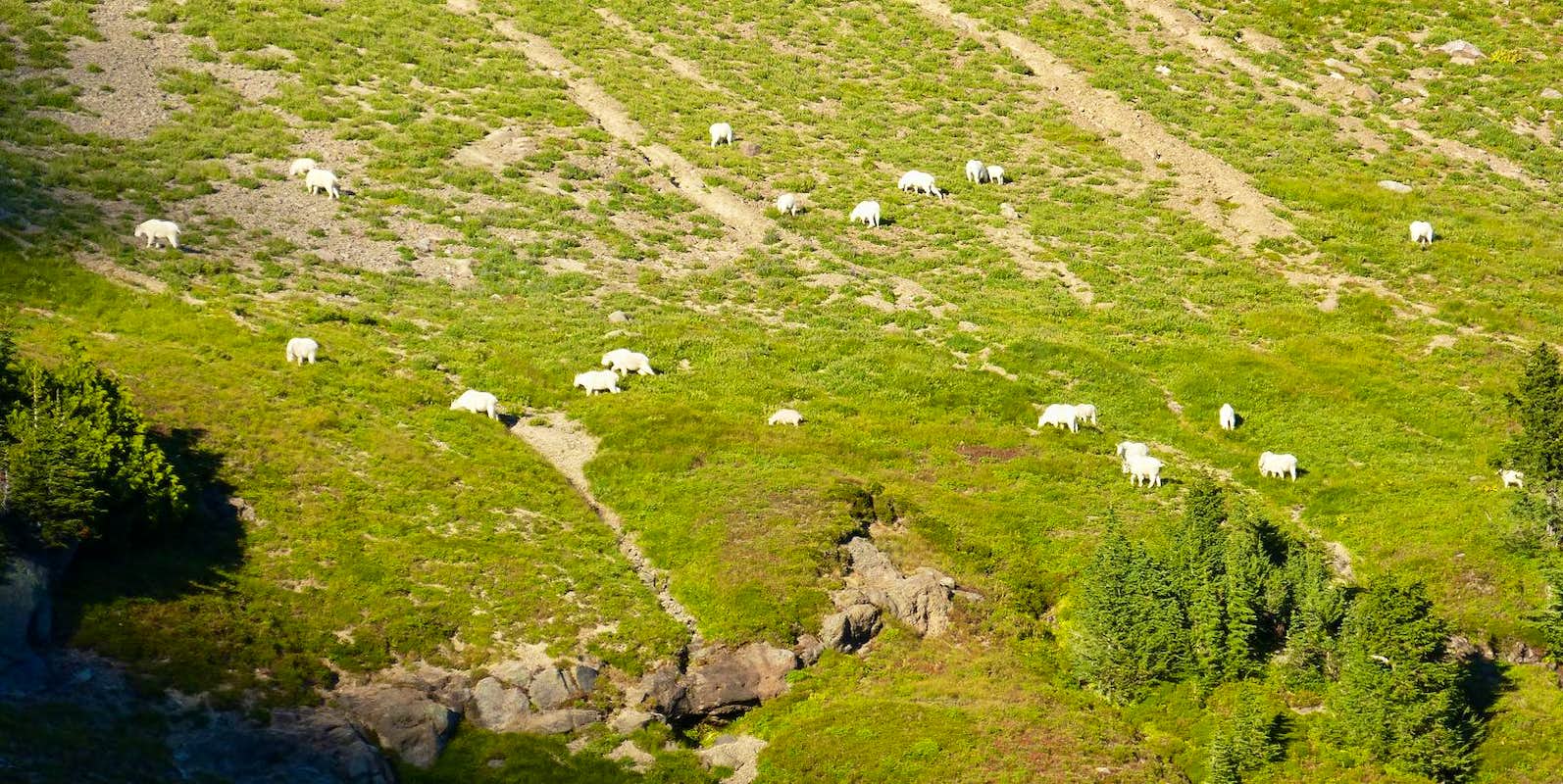 Goat Lake Goats
In the morning, I crawled out of the tent around 6:30 and took some photos of the sunrise.  After a bit of breakfast we packed up camp and headed off for alpine camp near Snowgrass Flats. 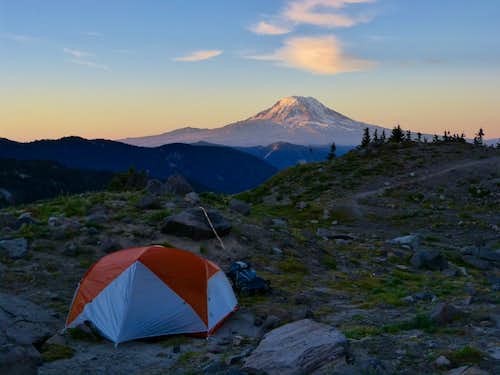 After poking around a bit we decided on a nice little camp site tucked away in the trees.  This area lacked the views we had at Goat Lake, but made up for it with copious amounts of shade trees.  My dad wanted to lounge, I wanted to climb Old Snowy, so I packed up and headed up the trail towards the PCT.  After a couple switchbacks, the trail met up with the PCT in a wide open basin with great views all around.  There were a couple of huge boulders just sitting out in the open.  At this point high clouds were rolling in which added to the scenery.
From there the trail entered a talus field and views of Hawkeye, Johnson, and Goat Lake came into view with Rainier off in the distance.  Such amazing views up here!  I continued up the trail following the signs for Old Snowy.  The summit block was one big pile of loose rock, but with a well defined boot path up to the summit.  One hour and forty minutes after leaving camp I was on the summit!  This was probably my favorite view of the trip and was much better than I was expecting.  The views of Gilbert and the Big Horn group with McCall Glacier below were pretty stunning.  I looked around a bit for a summit register but didn't find one.

Mount Rainier from Old Snowy- lots of birds in this pic if you look
After 20 minutes or so I began my descent, chatting briefly with a through hiker.  As I neared the junction with the trail back to camp, I met my dad coming up.  He was pretty happy to have made it to the PCT.  He walked up the trail a few feet so he could tell people that he hiked a section of the PCT.  :)  He mentioned that a hiker he talked to said the forecast was calling for rain starting around 9 am.  We mentioned this to another couple of hikers we ran into and they said the forecast they saw called for rain starting at midnight, 100% chance of rain no less.  We mulled this over on the way back to camp.  I had only brought a flimsy emergency poncho since the forecast I checked the morning of the trip called for 10-20% chance of rain on Saturday.  Not wanting to hike out in the rain with all my gear drenched we just packed up and headed out that afternoon.  The hike out was pretty easy and soon we were back at the trailhead.  On the drive home I saw three elk on forest road 21, including a huge buck, and I nearly hit a deer on highway 12.  I was in the middle of moderate traffic and the thing just dashed out of the woods and directly in front of my car.  I swerved 80% into the other lane and narrowly missed hitting it.  Thank goodness there was nobody in the oncoming lane.  Fortunately the rest of the drive home was uneventful and I was soon home to my family and a warm shower.  It was great to visit the Goat Rocks again, and even better to backpack with my Dad!  We had a great time and I'm already looking forward to next year!

As I sit here at my computer at work and gaze at the photos ... I wish I was there. Great photos and what a great memory maker spending time with your Dad like that.

Watch out for the deer, though!

Re: Great Photos and report

Thank you! I had a fun time on the trip, and a fun time putting this together. Thanks for checking it out!

Nine years in a sailboat ! Boy, was that in Puget Sound -- reminds me of the song "Sail on Sailor."

Love the pictures and glad you had so many fantastic views.

He spent time on the east coast, Bahamas, Central America, and Mexico. He borrowed a bunch of gear from me for this trip, but since then he bought all new gear for next season. It's safe to say he's got the bug again! :)