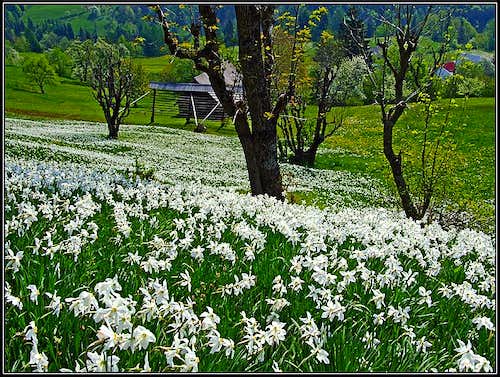 haubi - Golica from the east 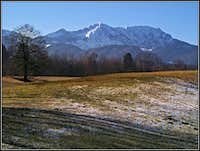 Golica from the north

Gangolf Haub - Golica from the west

General remark: When reading Slovenian words on maps or in books, you will find special characters for ch, sh, and zh. They are written with c, s and z with a caron - little v above them (čšž).

Avseniki, the most famous Slovenian folk music group has among their numerous hits one - "Na Golici" which holds a record. It is still the most sold instrumental musical piece in the world. Listen to it - click here!

If people in Slovenia would be asked to tell the first association on the word Karavanke, it would with the majority probably be 'Golica'. This mountain is so characteristic, so popular and so deep in hearts of Slovenian people, that it is probably more often referred than Stol, for example, as the highest mountain of the range. Why is it so? There are folk songs, there is tradition, there are feasts every year, all connected with the spring time, exactly with May, when the slopes of Golica are densely covered by millions of beautiful flowers - daffodils (Narcissus poeticus subsp. radiiflorus). But, as it is common with natural treasures, in the last decades also the number of daffodils in Golica region is decreasing. Pictures from one hundred years ago are showing slopes completely white, as if snow fell again, the whole mountain blossoming. Today - well for those who don't know the ancient times - it's still beautiful. 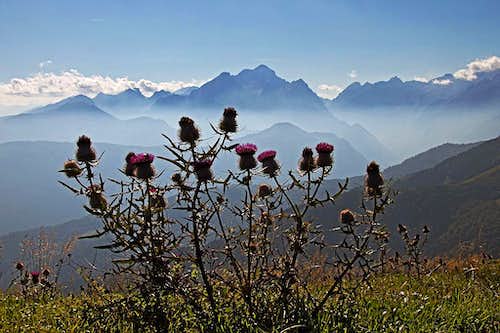 The view towards Triglav - so, not only daffodils ;)

Otherwise Golica is also a decent hiking goal. A true mountain with all characteristics of Karavanke mountains: great panorama, not a difficult ascent, probably best for crossing on a long-distance hike. Outdoor activities on the mountain are supported by a nice mountain hut. Koča na Golici, 1582 m, is standing on mountain's south slopes and many hikers are visiting it. From the northern, Austrian side the mountain is also frequently ascended, but doesn't have the popularity as on the southern side.

Although being a grassy summit, Golica is not very popular for tour skiing. It certainly can be done with skis, some of its slopes are steep, but not so much that it would be too dangerous. The main reason that it is not more popular for skiing is, that possible downhills don't finish in a good terrain, so the logistics is more unpleasant.

The whole area is also popular for mountain biking. In the lower parts there are many nice forrest roads, on the southern and the northern side so, but I have also seen on the web a video of biking on the summit ridge. For technical climbing Golica has no bigger rock face.

Geographically Golica is the part of Karavanke main ridge between Jekljevo sedlo (saddle), 1487 m, on the west, and Sedlo Suha (saddle), 1439 m, on the east. Towards the west it is attached to the group of Dovška Baba, Hruški vrh and Klek, towards the east it is attached to the Struška and its summits. Besides the main summit, 1835 m, there are two more elevations on the summit ridge: Mala Golica 1630 m and Krvavka, 1784 m.

Picture on the right shows that the main ridge is built of late Triassic limestone. Only due to not so high altitudes, it is not more rocky. On a bit lower altitudes we can find dolomites and limestones of middle Triassic and lower Triassic. Especially Schlern Dolomite is a brittle rock, which explains why steep crags and rock towers can be found on the southern side below the mountain hut and on the northern side as well. Later I'll describe also a more remote summit of Kapellenberg / Kapelični vrh - rising just above the valley of Drau / Drava with steep, crumble rocky crags of Schlern dolomite. The broad grey area on the southern side - on Španov vrh and west of the village of Planina pod Golica - is made of older paleozoic rocks (slates, marls, sandstones), of Perm and Carbon era, which explains why there are gentle slopes and broad alpine meadows.

Golica massif from the east, from Ptičji vrh

As every high summit of Karavanke/Karawanken also Golica offers a great panorama on all sides. Here are just some examples.

For the general overview, see the Karavanke/Karawanken GROUP page!

From the south, we start ascending Golica from the main Sava valley. From Jesenice town, two good roads ascend towards the north.

The western, and the more recommended one, goes to Planina pod Golico and further towards Savske jame and up towards Markeljev rovt (pasture) and Pusti rovt (pasture). These forest roads are build further and further every year, but some end sections are closed for public traffic. You can now park on altitudes around 1200 m (Križevec). End of summer 2013 it was even possible to drive up freely to Pusti rovt and further on to Suha saddle, so just to the main ridge. The village Planina pod Golico can also be reached by local bus.

The eastern road goes from Jesenice towards Javornik. You can park around the hut, or drive further up, on Križevec saddle, 1200 m.

From the north, forrest roads ascend from the valley of river Drau. Villages, where you must deter from the main road, are: Podgorje / Maria Elend, St. Jakob and Podrožca/Rosenbach.

Below is my U-Map (OpenStreet Map), which is at the same time also a guidebook, precise enough to be used online for orientation.

3. Via Jekljevo sedlo. 3 h. This is the western route, identical with the ascent on Klek, 1753 m. In the final part you cross the eastern slopes of this mountain to the saddle and then continue by the western ridge on top.

4. A possible ski tour. I haven't done it, but for ski touring enthusiasts this information could be interesting: You best ski down from the main summit directly towards the S-SW, on Planina Možine (alpine meadow, hut). There is the end of mountain road. Otherwise Krvavka is nice for skiing too, only below the mountain hut the woods are not the best for skiing.

From the north (Austrian side). I haven't done those hikes up, so more information comes in the future.

It's a less important elevation north of Golica / Kahlkogel, additionally even overgrown with woods and so not much panoramic. But it has its charms. Above the valley of Drau / Drava it rises with steep crags and below them, on 784 m, there is a complex of chapels, popular for pilgrimage. Just a few minutes below them there's a water source, supposedly with healing capabilities. From Greuth / Rute or from Maria Elend / Podgorje easy marked trails reach the place in good 30 minutes. But the route further on Kapellenberg is officially closed, even if you can still follow its marks. I found it quite difficult (T3 on the Swiss Hiking Scale), because on those steep forrest slopes a very narrow path went up, covered with big balls of hail which was hidden below leaves. I never experienced something like that before, so from the summit I put all my effort to find (in rain) the way down on the other side.

No limitations. For Karavanke tunnel you must pay toll.

Golica can be ascended any time of the year. In heavy snow there's an avalanche danger on summit slopes.