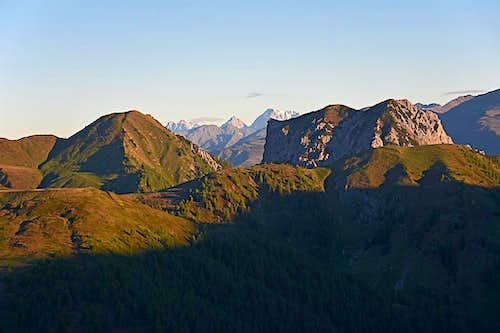 Alplspitze and Breitenstein - the difference between crystalline gneiss and limestone

Lienz Dolomites are the westernmost group of Gailtal Alps, the range between the rivers of Gail/Zilja (on the south) and Drau/Drava (on the north). The group of Lienz Dolomites is nicely presented on Gangolf's page, but on this page I want to suggest that the southernmost part of the group is treated separately. So, I will not describe only Golzentipp, the main summit there, but also a few more neighbouring summits, gentle, rounded mountains with the same character. 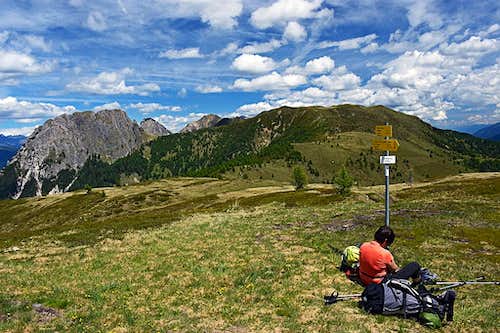 The limestone Spitzenstein (left) and the crystalline massif of Golzentipp (right), as seen from Dorfberg. 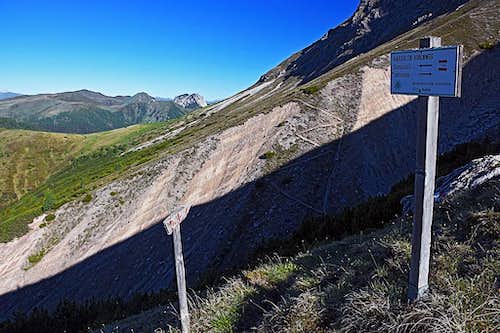 On the geological border

While the highest peaks of Lienz Dolomites are nice, rugged dolomitic and limestone mountains (but geologically not belonging to the Italian Dolomites), in the southern part, along the valley of upper Gail (Lesachtal) there is a range of mountains, with a completely different nature and look. While those mountains are still quite high, reaching up to 2317 m, they are rounded, grassy, alpine pastures are reaching to the very summits.

Geology is of course responsible for these differences. The mountains on the south are made of the so called Gailtal Kristallin, so of older, metamorph rocks (crystalline gneiss), being similar to the rocks of Eastern Alps (Austroalpine), for example in Gurktal Alps. Even the below Google relief map clearly shows the border of two areas. On a first glance we can see the southern range, being only on a few saddles connected to the limestone mountains. On the very west, the last limestone summit is Spitzenstein, while the southern range is stretching all the way down to Silian. On the eastern end the Gailtal Kristallin belt is slowly fading and ending before Hermagor. When hiking through the area, for example by the long-distance Gailtal weg, you will see in the border zone of the two areas also some other types of rocks. Interesting is a belt of red sandstones  and of so-called Verrucano, formations older than dolomites (of ca. 250 million years).

The summits just above Lesachtal are very popular with hikers. Also in winter conditions they are all first class ski touring goals. As Lesachtal is quite remote, tourists are not coming massively there. We ascended in June in two days half a dozen of summits and hardly met any people in the whole area. Well, the cable car starterd to operate just on the second day. The paths along the whole range, from the villages up on the alpine meadows and summits and further into the "true" Lienz Dolomites are well marked and fairly well maintained.

On the west, the first summit worth mentioning is Dorfberg, 2115 m. It's long western ridge is forrested, with also many clearings, but only the last 150 meters are really above the timber line. Further towards the east the ridge is gently waving - over the point 2099 m, then on Pfannegg, 2248 m, then towards the NE on Point 2178 m, and finally on Golzentipp, 2317 m. From this main ridge towards the south, into Lesachtal, many short, gentle side ridges are descending.

Towards the north, however, a strong side ridge is deterring from the summit of Pfanegg. On 2113 m there's a saddle, beyond which already the sharp, limestone tower of Spitzenstein rises. Quite similar is the northern ridge which goes from the summit of Golzentipp. Only, that it first reaches the grassy dome of Alplspitze, 2296 m, beyond which there is again the sharp, rocky limestone castle of Breitenstein. Both, Spitzenstein and Breitenstein we can attribute to the "true" Lienz Dolomites.

From Golzentipp the main ridge continues eastwards on Point 2261 m, where it turns in the north-eastern direction again. It descends on the saddle of Morgenrast, 2108 m, rises again on Kofelspitz, 2185 m, and descends on the broad Gontrunsattel, 1953 m. There our area attaches to the much higher, rugged Tamerlanhoehe, 2376 m, but the border of our range goes by a side valley down into Ochsengarten valley end and again up on the Gumpedall sadle, 2092 m. Till here, just from the Lesachtal the strong ridge of Steinrastl, 2184 m, comes up. Its summit is just some 30 min of walk from Gumpedall towards the SW. Another gentle, slate-made mountain.

Similarly as Gumpedall is just attached to the rocky south face of Eggenkofel, also an hour more towards the east, Hals, 2136 m, is attaching to Eggenkofel the flat, high meadows of Kircher Almen. That ridge, coming up just from Untertilliach and Wacht, is not having any distinct summit. But its nature is the same as the one of Steinrastl.

From Golzentipp and its neighbours the views are very fine. Actually, the more to the west we are, the broader the views. But the mountain scenery is great also more towards the east, even if there the broad wall of Eggenkofel is obscuring big part of the panorama. So, from all these summits we see along the Lesachtal and the lower Gail valley far towards the east. Left of this long valley are the Gailtal Alps, right of it, and opposite to our standpoints, are the mountains of the Carnic Alps Main Range (Karnisches Hauptkamm). We distinguish just all of its big players, from the two Kinigats, over the Porze, to Hochweisstein/Peralba to the highest part around Hohe Warte / Monte Coglians. In a nice morning we clearly distinguished also the Julian Alps on the horizon. From above the western Carnic Alps, some high summits of Italian Dolomites are peeking. The Dreischusterspitze / Tre Scarperi is most nicely seen.

On the other side of the Drau valley, the big group of Defregger Alps can be seen. And again, from behind, we can see some main summits of the Rieserferner group (Hochgall and Schneebige Nock) and of the Schober and Glockner group. Finally, on the north there are the Lienz Dolomites. Depending on our standpoint we see either only some westernmost peaks, or also some of the highest peaks in the central part of the massif. But we always see the broad, massive Eggenkofel. 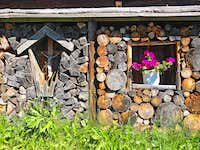 Golzentipp and its neighbours are almost exclusively reached from Lesachtal and the valley east of Kartitsch road pass. From the west, the main trailhead villages are the following: St. Oswald, 1360 m, Kartitsch, 1353 m, Kartitscher Sattel (road pass), 1525 m, Obertilliach, 1450 m, Untertilliach, 1235 m, Maria Luggau, 1173 m, etc. From the main valley (Lesachtal), you can drive northwards, either towards some valley ends, or towards some high alpine meadows. There are too many details how those mountain roads are opened for public traffic, but you can get the current situation in local tourist offices.

In this chapter, I'm giving just a few hiking ideas. The routes are mostly easy (T1 and T2 by the Swiss Hiking Scale), so no special descriptions are needed. But a good map can be helpful.

The long-distance Gailtaler Hoehenweg crosses these mountains. It is numbered with 229. 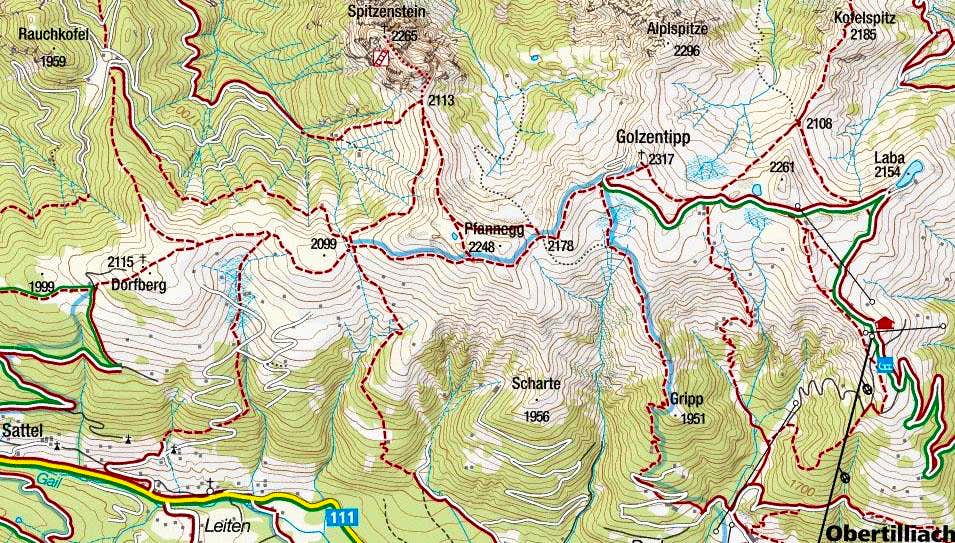 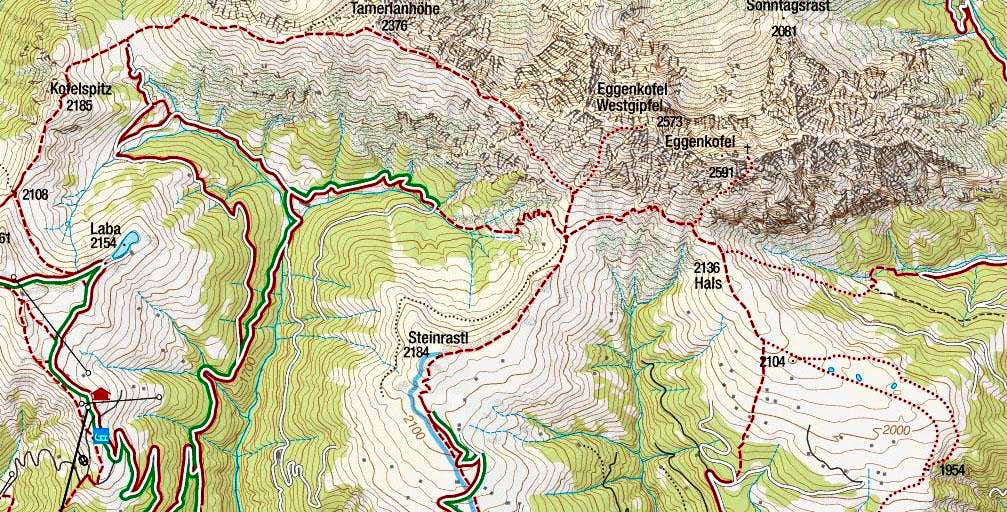 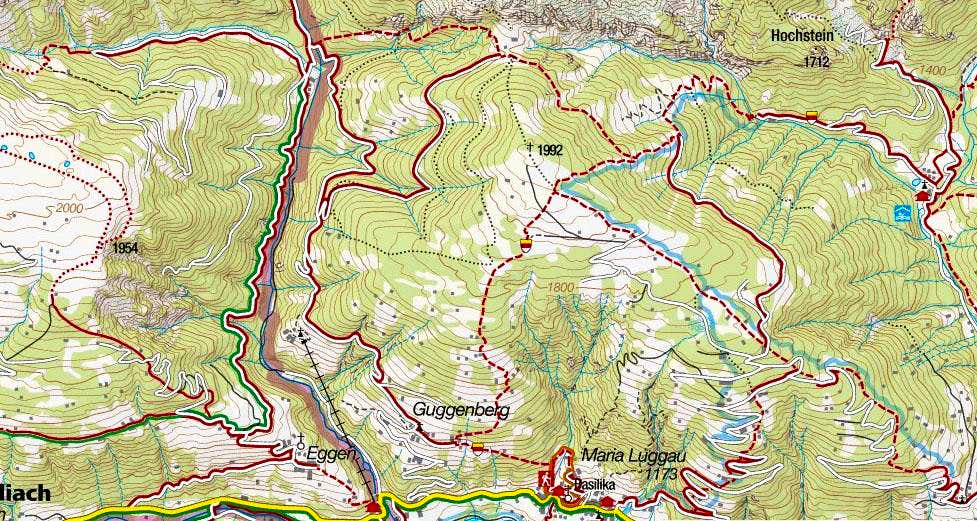 The most popular for tour skiing is of course Golzentipp, provided that we can use even the cable car till Conny Alm, 2070 m. Further on, there's also a short ski lift. On Conny Alm and above it in winter also a cross-country track is arranged. From Golzentipp then we ski down either to Obertilliach, or we continue along the main ridge towards the east. You can ski down even to St. Oswald, but then you must think of the return logistic. Equally great for skiing are also Steinrastl, Hals and Samalm, but we must of course start the tours in the main valley. 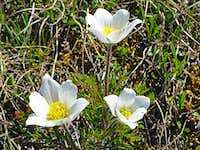 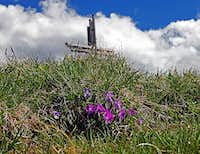 In the described area there are no special restrictions. Some mountain roads are closed for public traffic, but there are no administratively protected natural reserves.

Otherwise, nature is nice, even if the land is exploited up to the summits - for pastures, and on Golzentipp also a ski resort extends high. The areas outside pastures are however quite wild and still a true reserve for flora and wildlife.

Kutteschupfen - only the huts for drying hay

Our tent on the Gumpedall saddle

Mountain huts are in the valleys, the only exception is the hut on Conny Alm, 2070 m. It is opened when the cable car is operating, if outside those times, find information in the local tourist offices or hotels.