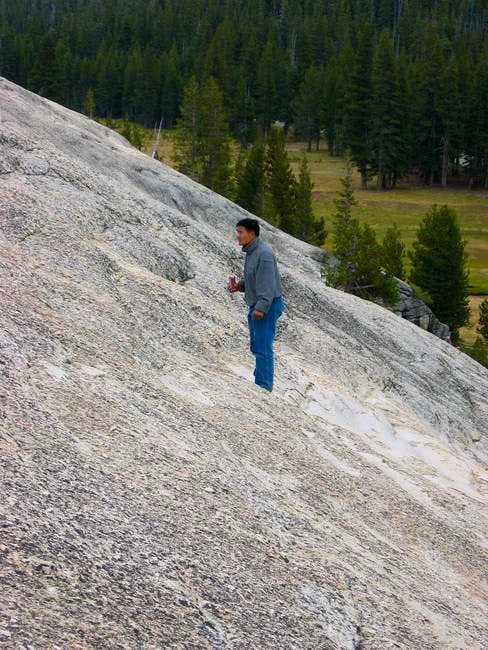 While some exceptionally strong parties might possibly be capable of doing this route completely free, I could envision others using aid up to SB (Schwag Beer) 5- this would slow the ascent time considerably, however.

Somebody better let Tommy Caldwell know-- this one looks like a great next challenge coming off of his last El Cap free.

Times past on the Dome of many Potholes

A few summers ago I found myself having massive difficulties maneuvering around the 1+/2- bulge about 75 feet off the deck on Pothole Dome. Protection was VERY sketchy (it involved some webbing tied around a magnum of wine that I lodged in a crevice). Out of nowhere--we're talking a four-star bluesky day here--it starts raining on me. I'm freaking out, looking for the rap station so I can retreat, when I realize that is just my friend above me who opened the 40 that got all shaken up when he took that whipper and landed in a lodgepole.

Another time, and this is the nekkid & unvarnished truth, a woman with whom I was peripherally involved took offense to my rebuttal of her services, and decided to drive out to Pothole Dome and get drunk. She was picked up by rangers for DUI and put in the Valley jail for the weekend, during which time I left the park. Never saw her again. Ah, if only all breakups could be so easy.