Three Days Deep in the Heart of Gore Range, Colorado

I had been driving for over 10 minutes when all of a sudden I realized that my camera was missing. What the ... I made an illegal U-turn and sped back home. This put me about half an hour behind schedule. The rest of the drive was uneventful. The dirt road seemed more eroded than 2 years ago and it took me close to an hour to cover 15 miles or so.

The hike started at the Piney Lake trailhead a little after 9:30. The plan was to hike along the good trail that leads to Upper Piney Lake for about 4 miles, where I would leave the trail and head straight up the mountain over Kneeknocker Pass and spend the first night at Duck Lake, east of Mt Powell. The second day I would explore the area for a little bit and move across the valley over to Bubble lake, where I would spend another night. The third day I would retract my steps over Kneeknocker Pass back to the car.
The Piney River trail was very well maintained and easy to follow. It is, however, a very illogical trail. Elevation gain for the first 4 miles is 700-750 feet, but the actual elevation gain from trailhead to where you leave the trail is only 500 feet. I take into consideration the additional 200-250 feet that I gained and lost due to the ridiculous position of the trail - instead of following the valley (or close to the valley), some genius from the Forest Service decided to construct the trail up the side of the mountain. The only reason I can see for this is to provide day hikers from Piney Lake Ranch with nice views of the surrounding area, which they will not be able to enjoy if the trail was lower in the valley. 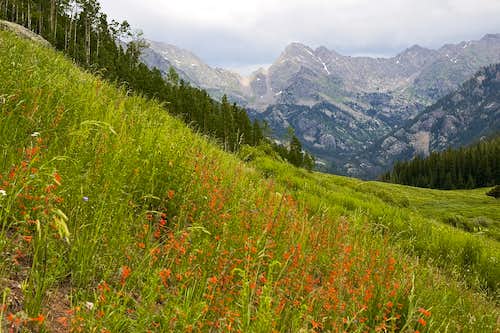 Looking East towards Kneekncocker Pass. A lonely sun beam is shedding light on the pass.
I was on the trail for maybe around 4 miles and left it before it started heading South-East. I easily found the unofficial trail going straight up the mountain towards the pass. The trail was easy to follow in the beginning until I ran into some serious vegetation, where I lost it for 1/4 of a mile. I was able to pick it up again after that and this time I followed it all the way above treeline and half the way up the pass. I saw some guy from Florida, attempting Mt Powell. He was the last person I would see for the next 3 days. I was on Kneeknocker Pass at 1:30, almost 4 hours after the hike began.
Elevation gain was around 3,200, of which 2,500 feet were gained during the last 2 miles after I left the main trail. 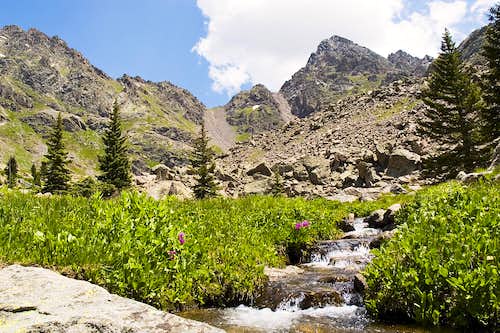 Finally out of the forest. Kneeknocker Pass is finally within reach.
There was a huge snowfield still covering the entire East side of the pass. The 2 permanent glaciers on that side were connected into one very large snow field. My only option was to slide down the steep snow. I had no crampons, nor a pickaxe, so I had to rely on my skiing skills. Half the way down I lost my rhythm and fell on my back. I, immediately, started gathering speed and the rocks at the bottom of the snow field were approaching fast. I was, somehow, able to turn on my right side and the tripod that was strapped to the outside of my backpack was able to dig in the snow and kill my speed. 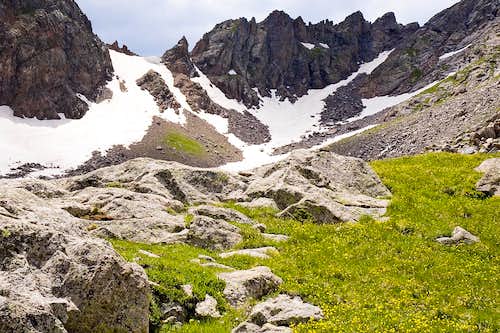 Looking West towards Kneeknocker Pass
Once on solid ground, I decided to cut across the mountain instead of going all the way down the valley, thus saving me some vertical. Soon I regretted the decision, when I had to negotiate huge boulders, some the size of an SUV. It was a very exposed traverse and I was praying none of these humongo-boulders decide to roll down the hill. 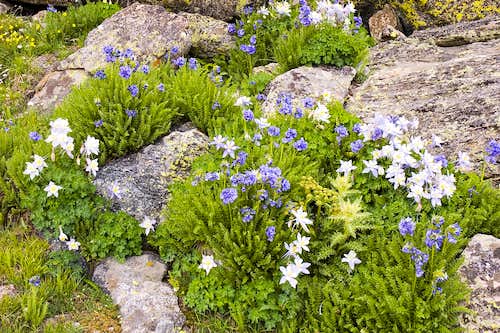 Beautiful flowers growing in a hostile environment.
After the traverse, and about 500 more vertical feet I was at another pass between Mt Powell and an unnamed peak (which Matt Lemke identified as Dwarf Pyramid - thank you Matt for clarifying this) just East of it.  Duck Lake was a beautiful sight and I felt relieved. 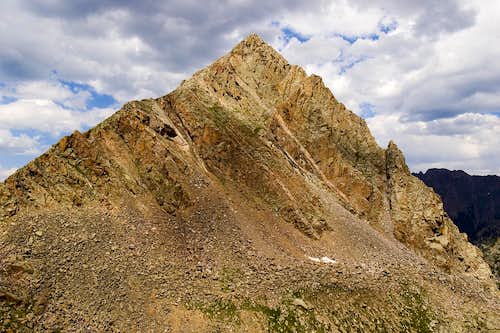 Unnamed Peak East of Mt Powell, which, turns out to be Dwarf Pyramid. Thank you, Matt Lemke for pointing that out
It was a little after 3:30 when I dipped my exhausted feet in the cold waters of Duck Lake. I spent the rest of the evening relaxing and taking in the scenery. 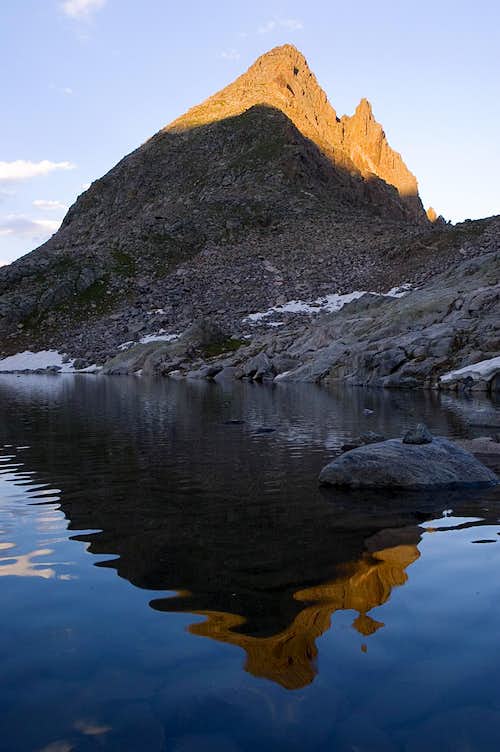 Unfortunately, the breeze never let up and I wasn't able to get a peaceful reflection of Dwarf Peak in Duck Lake
I got up with the sun on the second day and marveled at the change of colors on Mt Powell.

Early Morning at Duck Lake. This panorama is made of 2 stitched horizontal images. 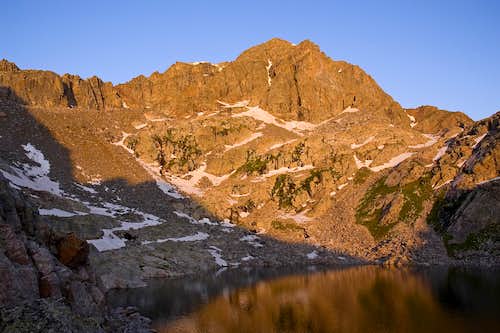 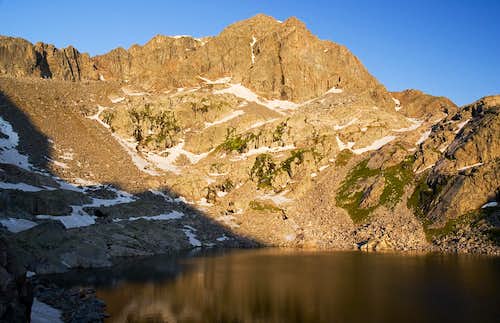 Another morning shot of Powell from Duck Lake.
After the spectacle was over, I climbed over a pass to the North of Duck Lake to take a peek at Eagles Nest Peak and the wide valley laying East of it. I was hoping to see Cliff Lake, but unfortunately I wasn't high enough and had an obstruction. Nevertheless, the view was beautiful. 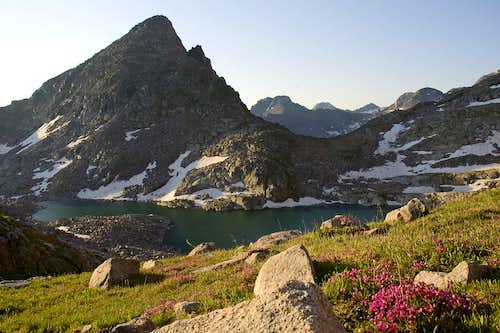 Looking South towards Dwarf Pyramid and Duck Lake on the way to the pass. 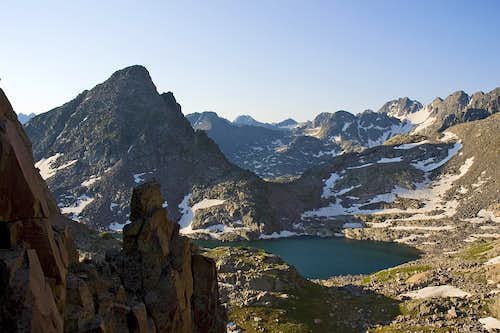 Another view from the pass. 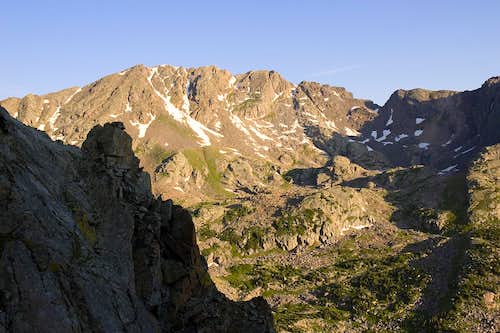 Looking North from the pass towards Eagles Nest Peak and the valley below.
After my short reconnaissance, I packed camp and headed South to Bubble Lake. I was able to avoid the cliffs due South, South-East on my descent by carefully reading the map. I veered North-East and picked a relatively gentle  and grassy line, which made for a very pleasant hike. 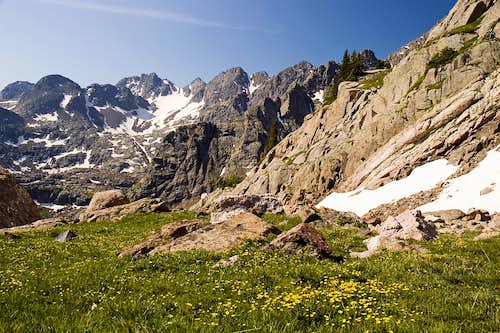 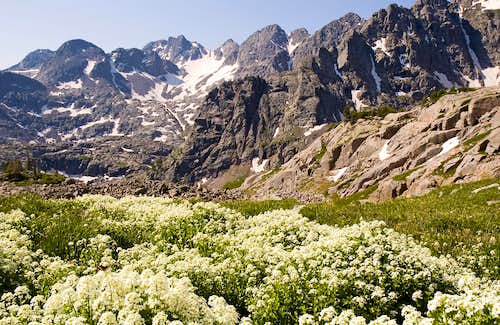 Butterflies feasting on the flowers. The sweet aroma filled the air within 100 feet. I must have spent half an hour just gazing at the butterflies and enjoying the sweet fragrance. 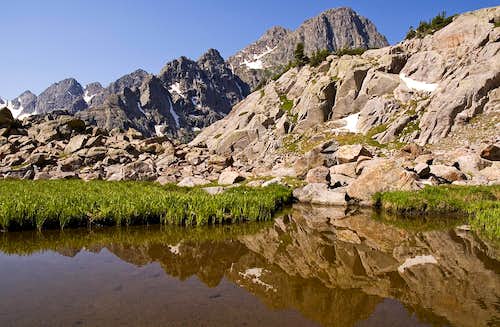 Some little tarn in an unexpected place. 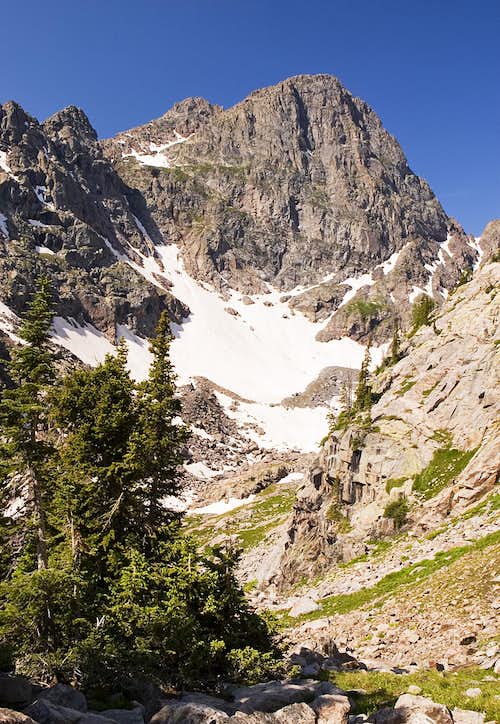 Blue skies over Peak C
I dropped almost 1,000 vertical feet down to the bottom of the valley and immediately started climbing back up towards Bubble Lake. I had to negotiate humongo-boulders again, but at least the slope was gentler this time 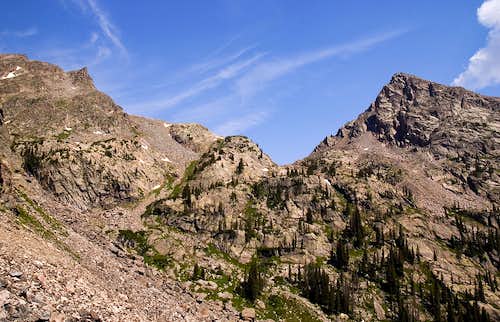 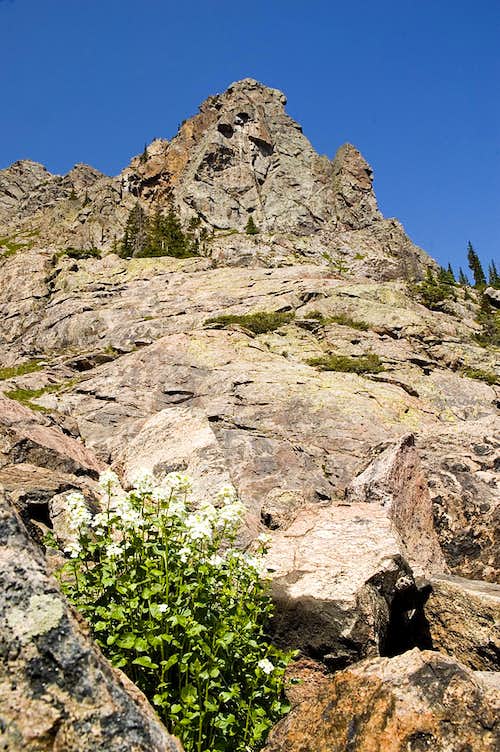 Flowers growing between the rocks
After a lazy 2 hour hike I arrived at Bubble Lake. I was very surprised to find out that it was huge - wasn't expecting it to be of this large size at all. Bubble Lake is at an elevation of only 11,250, but nevertheless it is a true alpine lake. There are some sparse trees around it, but the feeling is one being at a high alpine lake. It is mostly due to the menacing peaks towering above the lake.

First view of Bubble Lake. The panorama consists of 2 stitched horizontal images
I spend most of the afternoon vegging out and just walking around the lake. The mosquitoes were vicious and the sun was relentless. The temperature must have been in the 70s, which is not acceptable at this elevation. Around 6 o'clock it started raining. A very welcome coolness set in. 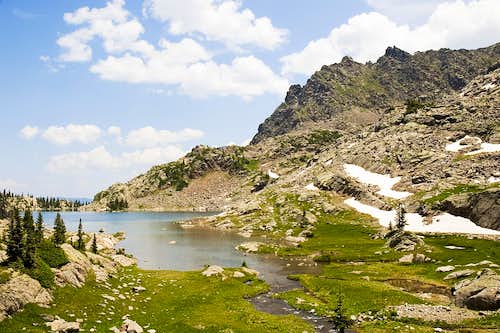 Bubble Lake from the West 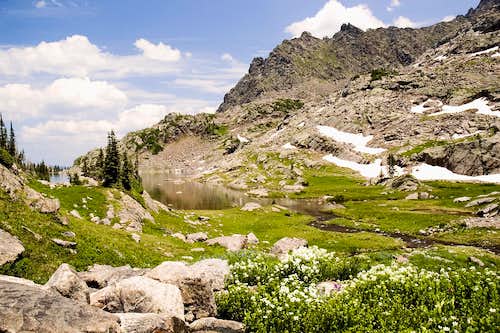 A different angle of Bubble Lake
Day 3 started with another beautiful sunrise. Due to the cooler front that had moved in the evening before, the temperature was only in the mid-30s. For comparison the previous morning it was in the upper 40s. Unfortunately, the breeze was still around and I couldn't capture the reflection I had had in mind the previous day. 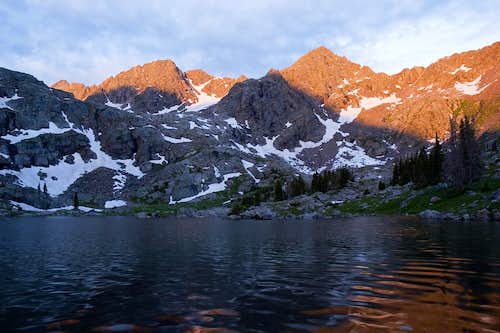 Alpenglow above Bubble Lake
I waited for some time anxiously for the winds to die away and my patience was rewarded with this nice reflection: 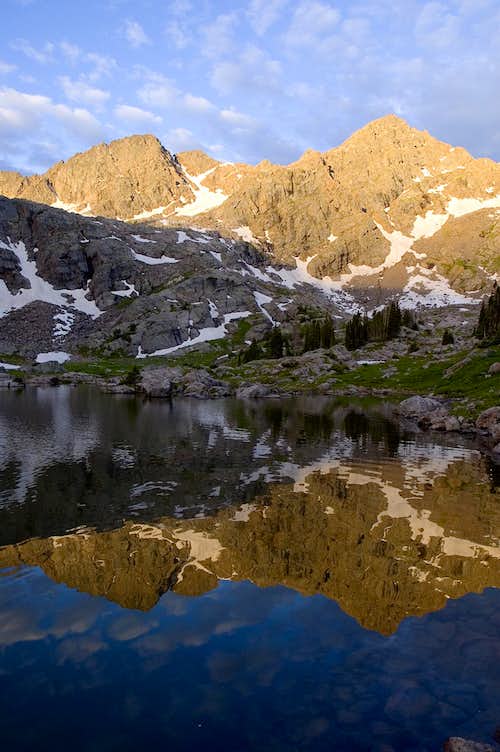 Peak E reflection in Bubble Lake
The winds were calm for only a few minutes, though, and I missed another potential reflection: 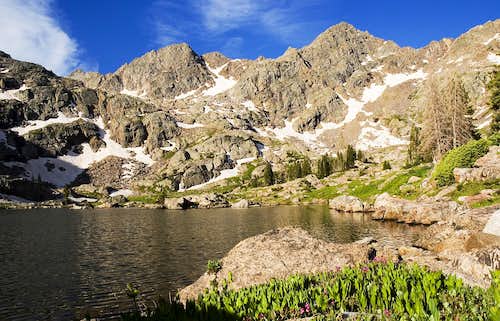 Peak E and Bubble Lake
After I was done enjoying the peaceful morning I headed back to Kneeknocker Pass retracing my steps from the previous day. 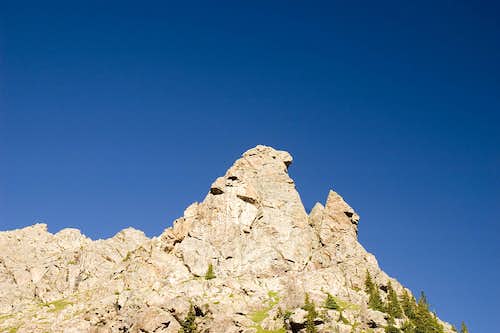 Does this look like an eagle head?
Soon I was out of the talus and on the glacier. My Asolo boots are getting too old and the soles were very slippery on the snow. Time to get new ones, I guess. 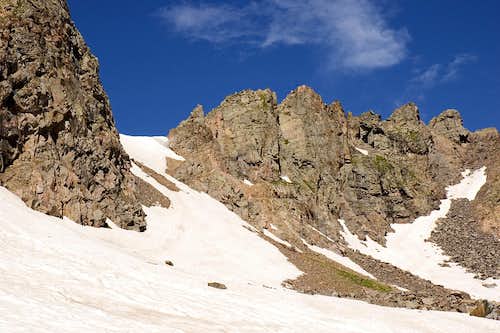 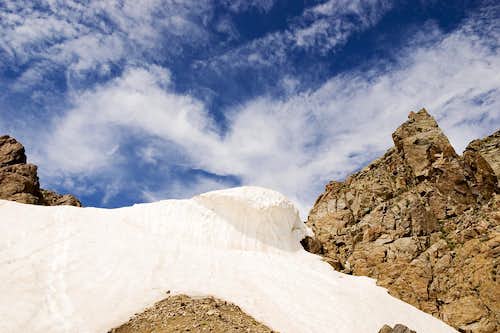 A little more to go. This was the steepest part. It wasn't completely thawed and kicking steps was harder. I love the cloud above the pass.
Once at the pass, I took a deep breath and enjoyed the scenery for a long time. I was a little nervous up to this point whether I was going to make it up the steep snow without crampons. If the sun hadn't been out and the temps had been lower, I would have been stuck in that valley, unable to kick steps in the ice. 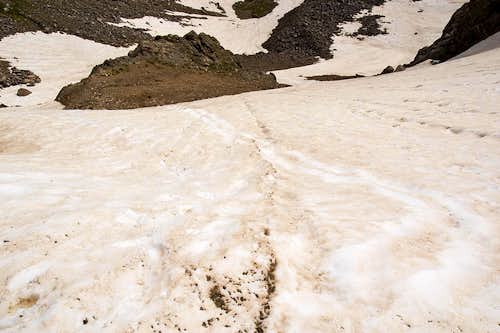 One last look down the glacier. My tracks sliding down 2 days earlier were still visible. 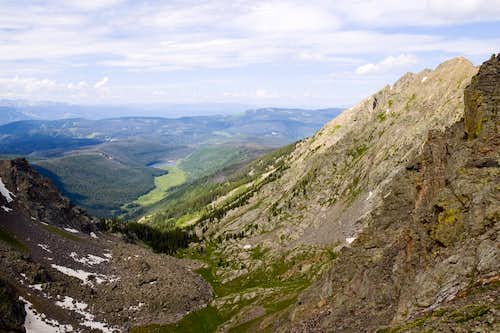 Looking East - Piney Lake in the distance.
I finally made it to the meadow under Kneeknocker Pass and was rewarded with beautiful flowers and refreshing water: 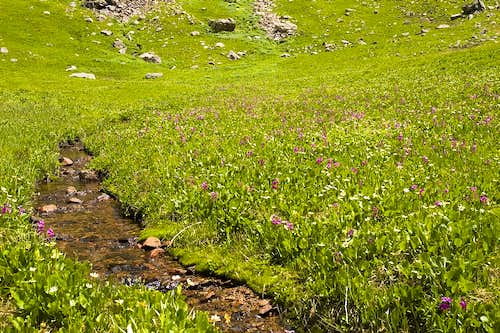 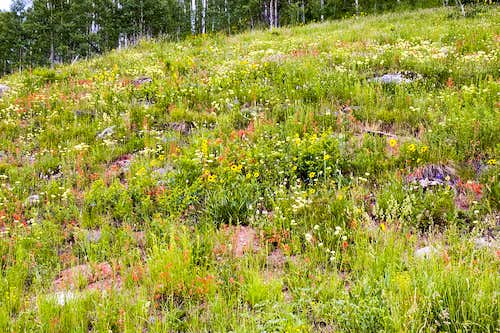 At the end of the trail, I was rewarded with a view of these beautiful flowers
I retraced my steps down to the main trail without an issue. I saw people within 10 minutes I picked up Piney River Trail - the first people since 2 days before. I was able to get to the car minutes before it started pouring. I passed quite a few vehicles on the way out - it was Friday and people from Denver were getting an early start on their camping weekend.

Great trip and write up

Looks like a good time alone in the wilderness. Lots of great pics. Wildflowers, peaks, and water: you've got it all. As a side note, I wondered if in Eagles Nest/Gores there is no alpine fire rules in that wilderness, or rules against having them against rocks. I like the pic... just spawned a question for me. Great share, I appreciate it.

I think I remember...

you asking me about Duck Lake a few years ago. Amazing place isn't it! Glad you were able to finally get there. Smart for returning back over Kneeknocker Pass...unlike what I did in 2010. I hope no one ever has to experience the Black Creek drainage ever again lol. Awesome photos as well! I missed Bubble Lake on our trip so I'll have to head back. Cheers!

Matt,
Your photos of Duck Lake were the inspiration for this trip. I tried it in late September 2011, but had to turn back, because of heavy rain and snow above timber line. I was cold and drenched and very unhappy.
And, no, there was no way I was going down via Black Creek - I read about your misery there.