There are many possible route variations. If you stay in the stream bed, there is one scrambling section (British) Grade II high up, and a couple of Grade I sections along the way. However, all serious difficulties can be avoided by occasionally following the banks of the stream instead.

You'll probably still want to use your hands, but it's easier than Grade I.

From Keswick, bus 78 serves Rosthwaite and Seatoller. From Seatoller it's 2km to Seathwaite, from Rosthwaite 4km. 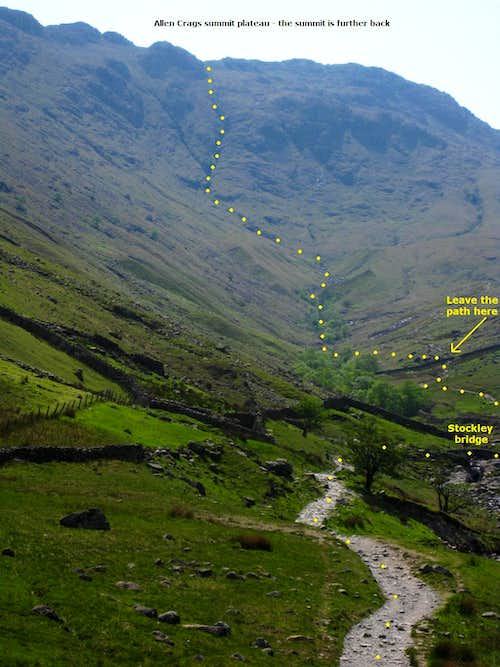 The Grains Gill Direct Route, from the good path leading to Stockley Bridge 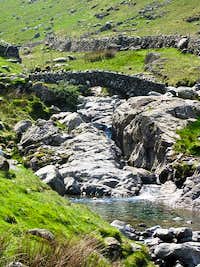 Stockley Bridge
From Seathwaite Farm, follow the easy big track to the south. After a little over a kilometer you'll reach the old Stockley Bridge. Cross it and turn left immediately, keeping the stream to your left. You are now following the Grains Gill.

About 500m further, the track passes a stone wall. To your left, you'll see trees lining the stream. Some 100m later, the trees end, and there is a simple wooden bridge over the stream (54.4818°N, 3.1820°W). This marks the spot where you have to leave the track and follow the Grains Gill directly. 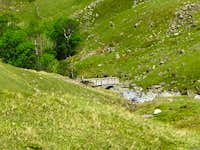 At first, the main problems are staying dry and dealing with the ankle twisting boulders in the river bed, but before long, you'll enter a hidden canyon. You'll now need your hands occasionally for some easy scrambling to overcome some small waterfalls. You can use the rocks on either side of the canyon to stay dry.

After a short while, a couple of steep waterfalls cascade down from the right. This is where the Ruddy Gill joins the Grains Gill, and above this point, the Grains Gill has less water. Shortly past the Ruddy Gill, you'll reach another small waterfall in the Grains Gill itself, with a puddle of water beneath. Even with low water levels, that's the point where you can no longer avoid getting wet if you want to continue in the stream bed. It's a Grade I scramble, made more interesting by the water. However, the risk is low since you can't fall far and probably land in the puddle, getting soaked in the process. Alternatively, a few minutes earlier you can get out of the canyon easily, with a bit of help from trees on the not overly steep canyon walls. Follow the bank for a few minutes and you'll reach the end of the canyon just past the waterfall.


The first part of the Grains Gill 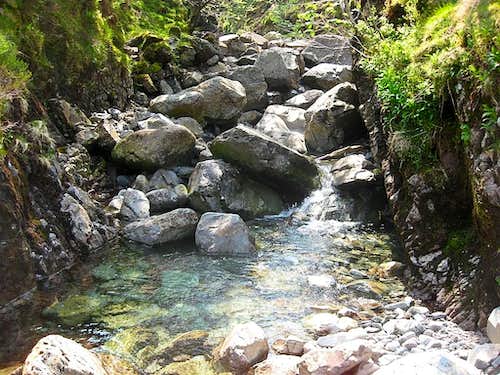 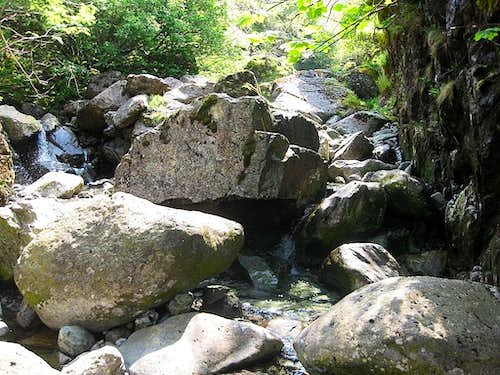 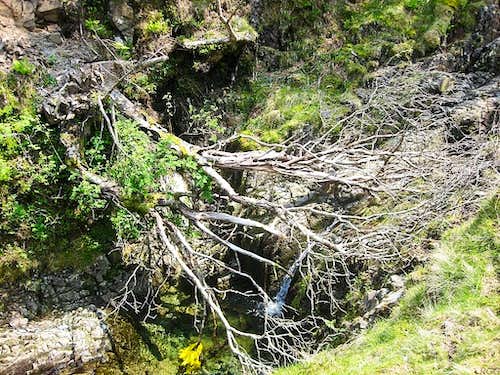 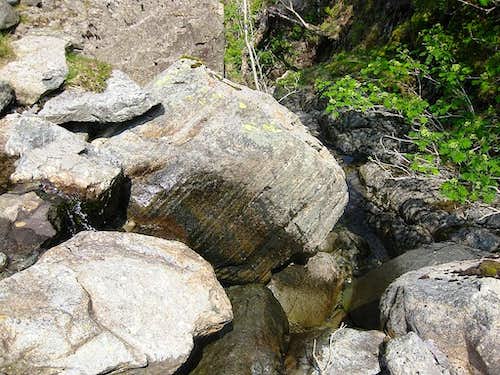 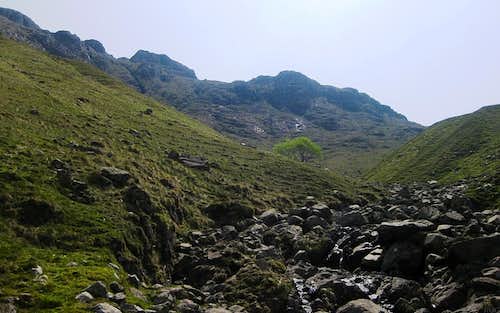 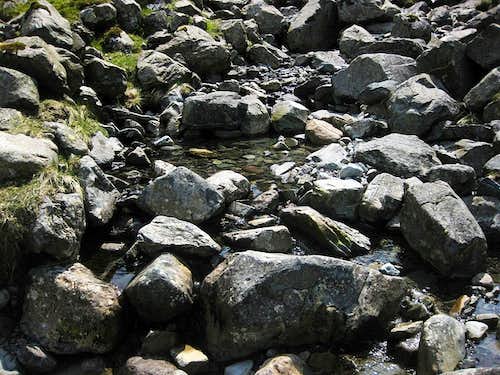 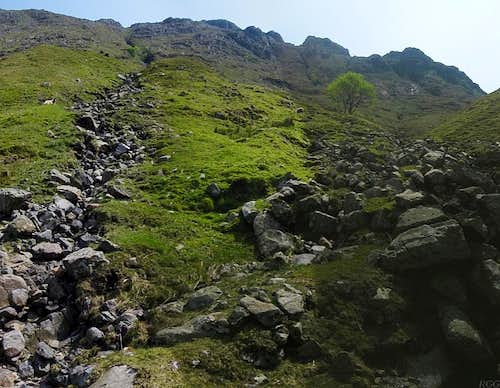 The Allen Gill, on the left, looks easy.
The  route goes  right, towards the tree.
The terrain opens up again. The Allen Gill now joins from the left (54.477°N, 3.181°W), looking very easy to follow, but continue straight instead, heading 165°, and keep following the biggest stream bed wherever another tributary joins. Shortly past the Allen Gill, that means turning east (54.4761°N, 3.1810°W), but almost immediately the route turns southeast again. 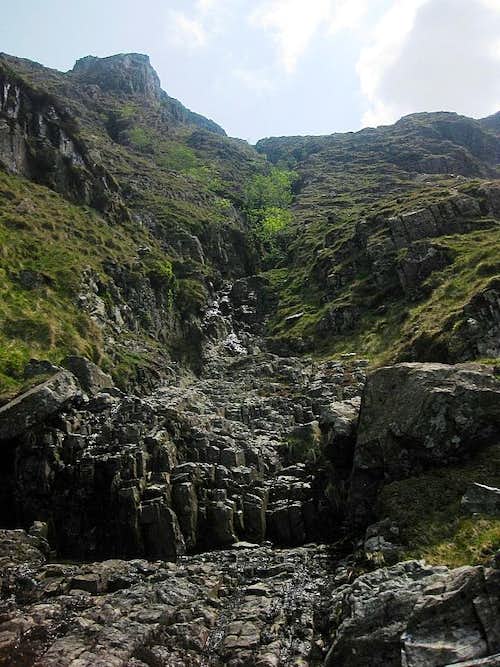 Shortly before entering the upper canyon
You can make out several canyons higher up, but unless you know it, it is hard to make out which one will be the Grains Gill route. Just keep ignoring all smaller stream beds and tributaries.

Almost until you get there, the true nature of the upper canyon is obscured by trees. Then, suddenly, it is surprisingly deep and steep! It gets rather narrow, and while the route is mostly easy, there is a bit of Grade I scrambling. Shortly before the canyon splits in two branches - which you can't see yet - you get to the real crux of the route.

At an earlier steep section the main question was whether you want to keep dry feet, while the technical difficulties were easy. This time that's different: there is a vertical rock step of about 4 meters high. There are some good hand holds, but it's difficult to find a good place to put your feet, and it's damp and slippery from moss and slimy green growth. As in the lower one, it is possible again to leave the canyon a few minutes before the rock step, and follow the bank. If you get out of the canyon early enough, that doesn't even require scrambling.


In the upper canyon 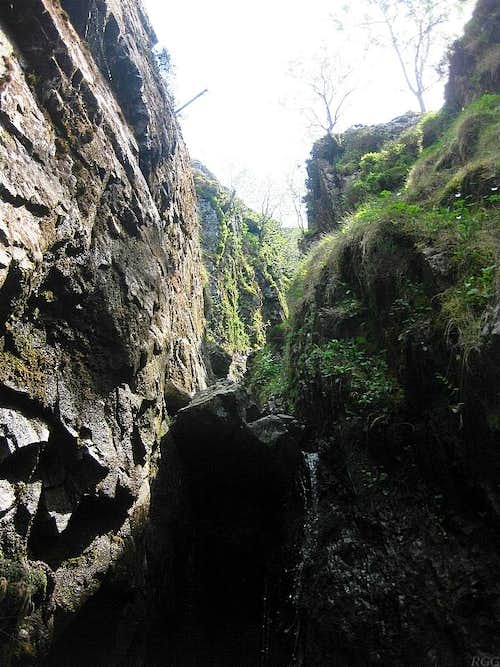 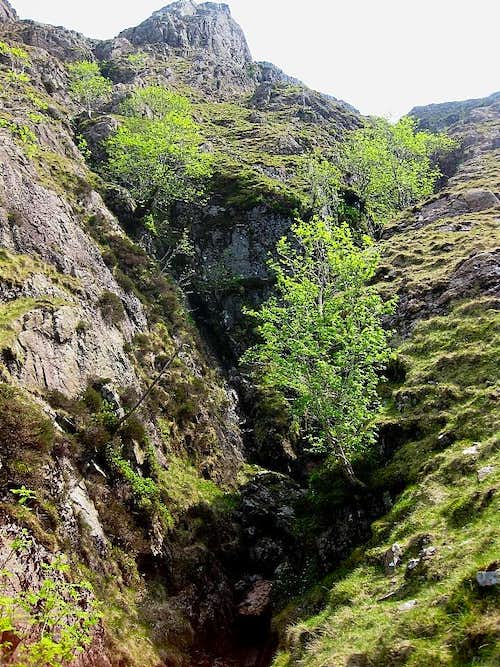 On the right bank at the split
I can't give a detailed description of the route inside the canyon above this rock step. Although I reckoned I could get up the step, I couldn't see ahead, so I could not see if there were bigger difficulties waiting further up. Perhaps there were none, but it might also be more difficult, and I hesitated because I didn't like the prospect of having to climb down the slippery step. Since I was alone, I decided not to take the risk. If you have more details, please let me know and I'll add them. Instead, I went back down the canyon a few minutes and got out on the right. 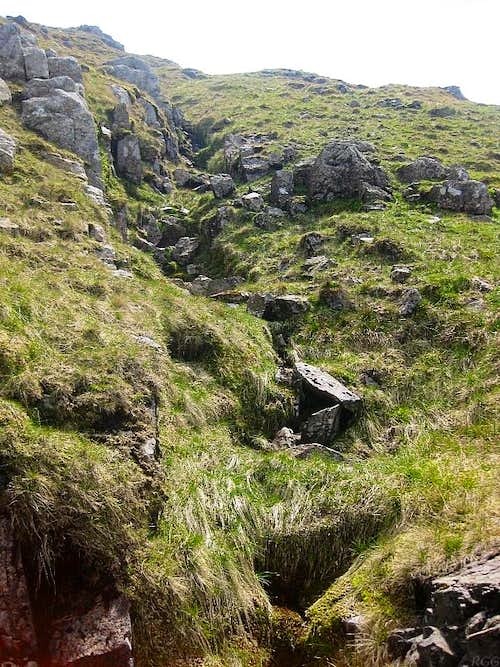 The Grains Gill just fades away

There are no more difficulties after that. Soon you'll be on the gentle slopes of the summit plateau and the Grains Gill peters out. The Allen Crags summit isn't visible yet, but it's just half a kilometer hiking, due south. Even without a compass, if you keep aiming for what appears to be the highest point on the horizon, you'll soon get there.


From Seathwaite Farm to the summit of Allen Crags takes two to three hours.

Looking down from the edge of the Allen Crags summit plateau to the north, towards Seathwaite Farm

The best time is when it is dry and water levels are low. If it is wet, you can still go, but may find yourself more on the banks than in the stream bed. The grassy slopes are slippery when wet, and higher up they are a bit steep, so slipping is not an option.

On the plus side, unexpected sudden flash floods are no danger. The catchment area for the Grains Gill are some of the upper slopes and part of the summit plateau of Allen Crags, which is so close that if it starts to rain, you'll be in it. And if it rains hard, the canyons are short enough to get out quickly.

I don't actually know if this is a suitable winter route, but, provided that the avalanche risk is low, I imagine that it could be fun with ice and snow.