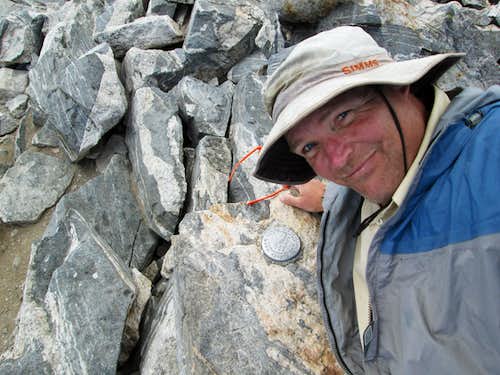 I’ve dreamed of climbing Grand Teton but have been putting it off for years.   I finally decided to give it a go and started reading up on it a week earlier.  I found that Grand Teton is easily climbed without gear.  Most of the pitches described in the guidebooks as “5.7” or “5.8” would barely pass as a 5.4 if they were on lower terrain.  What makes the pitches dangerous, of course, is the exposure.  One slip and you may fall 1,000 feet to your death.  More than a hundred souls have lost their lives in this way.  But if you are not afraid of heights and have some experience chimneying and scrambling up rock faces, the technical parts at the top of Grand Teton can be easily mastered.  (Climbing the mountain is a major feat nonetheless because by the time you reach the top you are generally exhausted.)

There are guiding companies that make big bucks generating the impression that they alone hold the keys to the summit for the common man.  These companies have an interest in perpetuating the impression that bagging Grand Teton requires extensive gear and technical training.  On the other hand, many of the paying clients enlisted by these companies are greenhorns from flat country who really do need to hire guides to climb this mountain.

I grew up in the shadows of the Crazy Mountains in Montana and have been climbing since I could first talk.  I’m fairly surefooted on rocky terrain and have a good confidence level regarding my abilities.  I decided, after reading up on the topic, to try my hand at a solo, free-climb (unroped) of Grand Teton.  I figured if I reached a point on the mountain that was over my abilities, I would turn around and try again another day.

I slept in my car in the Lupine Meadows parking lot until around 6:30 a.m..  After doing some quick packing, I left the car shortly after 7:00.  This of course is known as a late start in climbing circles, and I would later encounter people who had left the parking lot as early as 3:30 in the morning.

The guidebooks begin their descriptions of the Grand Teton climb at the lower saddle that separates Grand from Middle Teton.  However I found the trip from the trailhead to the saddle to be the most arduous part of the climb.  Miles of switchbacks, stream crossings and rock hopping.  I reached the saddle around 11:00 to 11:30.  There were two guide services operating near the lower saddle.  The Exum company has a station well positioned right on the lower saddle, and the Jackson Hole guide group has a group of orange tents stationed high on a ridge to the right of the saddle.  (I briefly stumbled through the Jackson Hole company camp while thinking it was on route to the saddle; finding it unoccupied and in the wrong place, I had to back down a hundred vertical feet to the left to get back on track.)  I then kicked my way diagonally up the snowfield onto the saddle.  There I briefly spoke to some Exum clients who had already summited (at like 8:00 a.m.) and were waiting for friends to descend to their level.

I took off up toward the Owen Spalding route at around 11:30, encountering a few guided climbers coming down as I went up.  Had a brief encounter with a friendly park ranger who knew the score.  Seeing me with my blue jeans and running shoes, he asked me what time I had left the parking lot.  When I told him 7:30 he said he thought I could make the summit before the predicted afternoon storms came in.

Within an hour I was on the upper saddle, totally alone.  I decided to drop my daypack and my gloves and just see if I could summit quickly and return.  I negotiated the “belly crawl” and found a notch to the right I could climb up (probably the second chimney described in the guidebooks).  Then I just poked and scratched my way to the summit.

Shortly before reaching the summit I had a great surprise.  Two well-equipped climbers, Ben and Bonnie from Utah, happened to be descending.  They asked if I needed a rappel and I said I thought I could make it down the same chimney I came up.  I raced to the summit, stood on the U.S.G.S. brass marker and took a few pictures.  Then I started having second thoughts about turning down Ben and Bonnie’s rappel offer.  I clambered down a couple pitches and found the two of them searching for a rappel route down to the upper saddle.  I cast my lot with them and we found a rock with a multitude of straps clinging to it.  I rappeled down two pitches on their line.  (The first with no harness and the rope looped around my crotch and shoulder, the second using Ben's harness).

Later that evening I stayed and showered at the American Alpine Club climbers ranch a couple miles away.  The lodging facilities were not exactly luxurious, and I assessed them as overpriced.  For 25 bucks you get to share one of six bunks in a cold unplumbed cabin.  Lots of rules such as no eating of food except on some picnic tables in a communal area.  Still there was good conversation (which may be the real value of the place) and the AAC library (off of the dining area) was worth spending a couple hours in.  It is stocked with hundreds of great climbing and adventure books, many of which are long out of print.  There are musical instruments, board games and a computer terminal with an internet connection.  A fellow climber played guitar for more than an hour and it was pretty good stuff.  I hunkered down on my laptop to work on a legal brief (along with this trip report).

The next morning (7/13/2013) I drove back north toward Yellowstone and stopped for coffee (and to finish this trip report) at the beautiful Jackson Lake Lodge in GTNP.  Huge picture windows (gazing directly at Mount Moran), a piano player in the lobby.  Life is too good to be true.

The total experience was all I could have hoped for.  No injuries, other than some blisters and scraped knuckles.

I doubt if I set any records, but I can brag that I made the summit unroped and went car-to-car in under 12 hours.