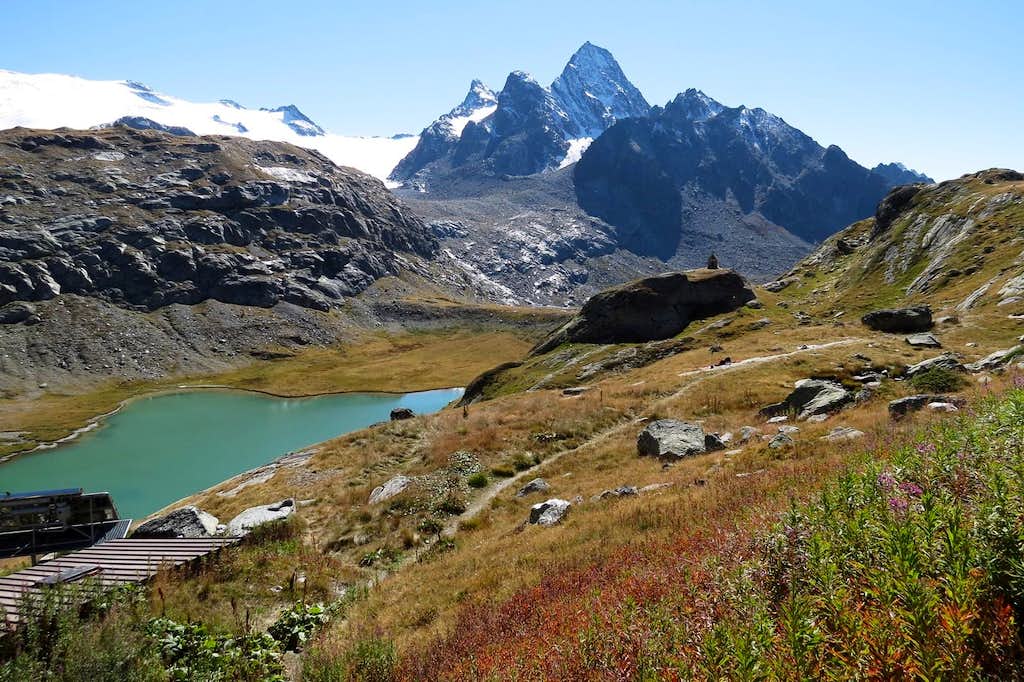 Great photo... what's that building on top of the scarp?

Is a solar panel for hot water of the refuge.

Thanks - What is the building perched on the rock at the far end of the lake? Odd shape - I'd say it's a Chapel but why two stories (floors)?

It 'sa long story here it is:

The Chapel of St. Margaret and St. Grato
The Rutor, over the millennia expanded and retreated several times following the vagaries of climate. In particular, between the sixteenth and seventeenth centuries the languages ??of the glacier terminal tended to block the outlet of the lake, forming a dam that, due to the pressure exerted by the water and the highest summer temperatures, suddenly gave way, releasing enormous amounts of water , ice and stones tumbling tumbling on La Thuile, sweeping away bridges, roads, buildings and crops and doing overflow at several points in the Baltea Valdigne and even in the central valley. The authorities summoned valdostane various experts but their plans, too expensive, were never realized. Not being able to adopt technical solutions, in 1603 the Bishop of Aosta Bartholomew Ferrero granted to the community of La Thuile to make a procession up to the glacier, with the exposition of the relics of San Grato, also invoked against floods. In the place where they were joined in the procession the relics of the saint, following the vision of a resident of the area in 1606 was built the chapel dedicated to St. Margaret and grateful. Nevertheless, the flood continued for over a century. Only with climate change and consequently with the retreat of the glacier front upstream of the lake, the problem was resolved and the water poured on La Thuile, for the last time and without causing damage, in September 1864. The chapel was rebuilt in 1924, not far away is the mountain hut that, during the war of 1941, was rebuilt and dedicated to Albert Deffeyes. (Excerpt from the information panel located at the hamlet of La Joux, at 'beginning of the path of Niagara Rutor.)

Hello and thank you for your interest
Antonio

What an AMAZING story!

So in the past, when the climate was colder, the lake was much larger and occasionally broke its bounds and wrought havoc on the lands and people below!

The local people built a chapel dedicated to St. Margaret, and I can only assume that back then it was much nearer to the banks of the lake than it is today.

What a GREAT story... Boy would I LOVE to explore that chapel some day!

Thanks for sharing this interesting story, Antonio. I enjoyed reading about it!