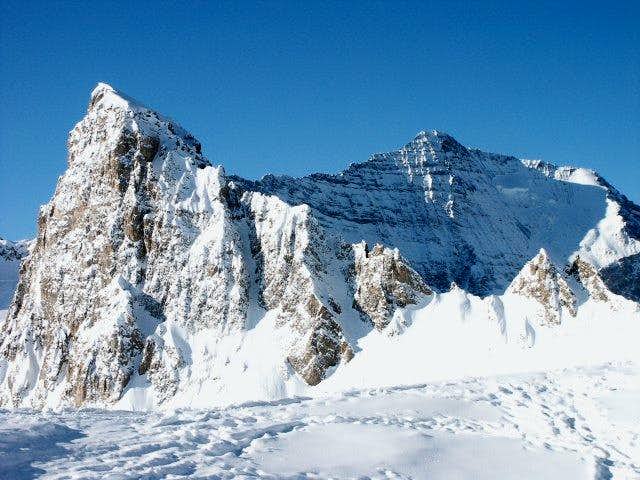 The Grande Casse is one of the most important summits in France. It is the highest point of the Vanoise, the third greatest mountain range after the Massif du Mont-Blanc and the Massif de l'Oisans. It is also one of the finest summits with a famous north face. The summit is very interesting for the alpinists with a long-known and relative easy normal route. This route becomes in spring a top-level ski-descent for (very) good skiers.

The north face is the most important ice route south of the Mont-Blanc range in France. The right part is a 600 m wall very steep under the summit and becoming milder in the west. The other sides of the mountain are broken rocks without interest. The ridge between Grande Motte and Grande Casse is sometimes covered: ample course of 2 km on the edge.

By the road, A 43 to Albertville. Take then the route de Tarentaise to Moutiers (27 km from Albertville)and then the road at the right to Brides les Bains, Bozel and Pralognan (26 km from Moutiers). Parking over Pralognan in les Fontanettes (1650m)

Some advice : Saturdays in February and march arrive at Albertville before 8 h or after 16 h. Traffic info on France Bleu Pays de Savoie (103.9 )

Nearest station in Moutiers-Salins (26 km from Pralognan).TGV stop from Paris and Lille.

The Grande Casse is situated in The National Park of the Vanoise.

-No picking, no collecting the animals, plants, rocks and fossils all belong to the environment.
-No loud noise, no disturbance, for the tranquility of all.
-No dogs, not even on a lead, so as not to disturb wild and domestic animals alike.
-Leave no rubbish, no trace of your passage.
-No camping, no bivouacking. Bivouacking is allowed near certain refuges, under the control of the warden.
-No fires. To reduce the risk of wild-fires and to avoid damaging the soil.
-No paragliders or other means of air-transport. Overflying at less than 1000m is also forbidden for the tranquility of the animals.
-No mountain biking. For the safety of walkers and to avoid erosion of the paths. However, certain trails in the Park have been designated for biking.

History of the Park:

King Victor Emmanuel II created the Gran Paradiso royal reserve in 1856; it was enlarged in 1922 and made into a national park. In France, the creation of a national reserve in the Vanoise mountains was being considered from 1943, under pressure from the Club Alpin Français, the Touring Club de France and hunting associations. There were numerous hesitations concerning the surface area to be protected as well as whether the focus should be placed on humans or animals. Finally, the project was planned with two zones, one central, the other peripheral. The ibex was at last permanently protected by the Vanoise National Park, created on 6 July 1963 - the first French national park. It has a common border with the Italian Gran Paradiso National Park. Twinned since 1972, together they cover 1250km2 and constitute the largest protected site in Western Europe.

First day : same as 1-
Second day : From the hut walk down along the lac Long you follow on the right and climb on the morraine at the left. Climb on the Glacier des Grands Couloirs (ice tong on right bank). Then climb the couloir coming down from the Pointe Mathews and cross to the summit.

First day : as 1-
Second day : Walk from the hut to the Lac Long and conturn Grande Casse side. Climb to the col de la Grande Casse. You are in the north face. Cross the face, climbing a little to a rocky spur. Level at 40°, then 50°. Climb on the ridge at the right end of the summital rocky bar.

From June to September
From February to May as skitour

Author: Rob Mc
Date: Apr 26, 2005 07:35 AM
There are 2 campsites in Pralo (as the locals call it) the 2 * "Le Chamois" and the 3 * "Le Parc Isertan" which has mobile homes and Chalets. I have stayed at le Chamois and it is highly recommended, with clean facilities and constant hot water with good pitches within 5 minutes walk of the local supermarket in the center of the town.