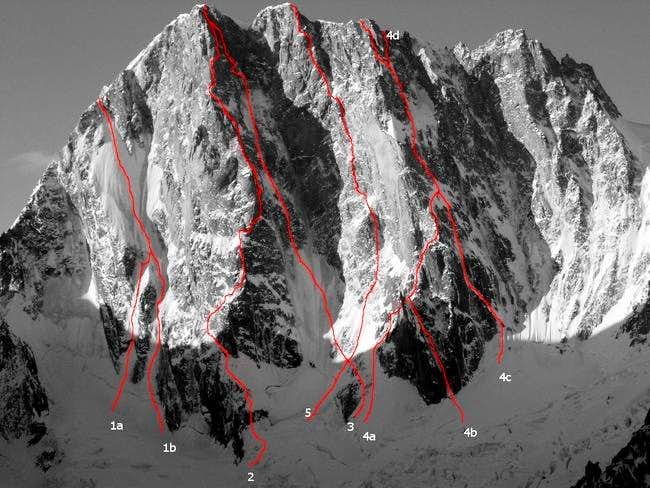 1b = “Le Linceul” (The Shroud: Flematti/Desmaison, 1968, TD+, IV/4, 750m to the Hirondelles ridge, 1100 to the Walker) This is the original right hand start of the Linceuil, more frequently used these days because easier,

2 = Cassin Route (Cassin/Esposito/Tizzoni, 1938, TD+/ED1, 1200m.) This is not the original line, but the one most commonly used today, including the Rebuffat variant opened in the second ascent.

3 = MacIntyre - Colton (Colton/MacIntyre, 1976, ED2, A1,VI/6, 90°,1150m.). In the last few year some of the repeaters end the route in the depression between Pt. Walker and Pt. Wyhmper, basically avoiding the crux of the original route (the narrow between the middle and the upper icefield, nat always formed) and taking the right hand couloir where the "Alexis" route does pass. However, the original line (shown here) is more aestetical and, in some conditions, safer.

4b = the alternative start of the Croz route via the "couloir face au Periades". Less dangerous than the original start but more difficult.

4c = the line most commonly used today in winter/autumn attempts to the Croz Spur, linking the beginning of the Slovenian Route with the so called Winter Variant of the upper Croz Route. It does maximize ice climbing, while keeping objective dangers to an amenable level.