Although the summit isn't very prominent it is still very well known, probably because of it's famous South-face, wich contains some of the best climbing routes of the Uri Alps. Like almost all routes in the Uri Alps, it offers steep climbing on beautiful Urnergranite. Another reason why it is climbed pretty often is the easy and short acces. It is possible to climb the Graue Wand in a day from Tiefenbach (2110 m), located on the Furka pass road. As far I know there isn't really a normal route on the mountain, and all ascents today are made on the South-face. Therefore I'm only focussing on it's southside. This picture gives a good impression of the 'other side/north side' of the mountain, and shows why it isn't popular, it's full of loose rock. Because of it's popularity it can be very busy on the South-face, especially during the weekend. 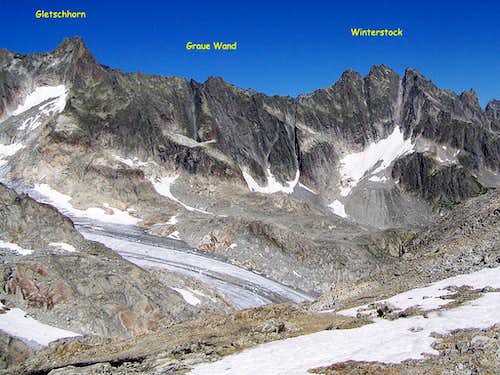 By public transport:
* Andermatt can be reached by train with the Matterhorn Gotthard Bahn, then continue to Realp. From here by Postbus (July – September) to Tiefenbach (2110 m).

To the Graue Wand (south face)
A rather short approach from the Albert-Heim-Hütte, 1 hour. Descent to point 2480 m and follow tracks in mainly NW direction (along a small river). Reach the small glacier beneath it's south-face and pick your climb. 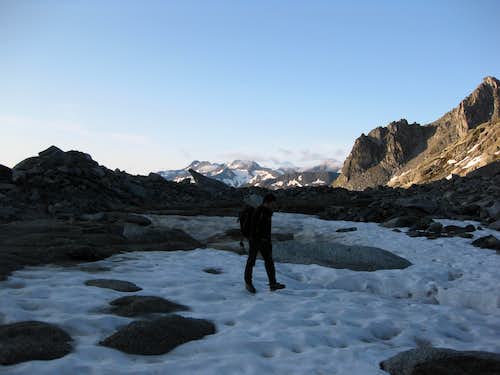 The South-face of the Graue Wand has several beautiful climbing routes. The longest routes are up to 400 meters long, like the classic Niedermann. Most of the routes are re-bolted and therefore pretty safe to climb. The BGA (Bergsteigergruppe Alpina) has re-bolted some of the classic routes. Due to it's short acces and the fact that the face is south orientated, it is possible to climb the Graue Wand pretty early in the season.

A selection of routes on the South-face of the Graue Wand:

Descent: rappel down the south face along the perfectly bolted rappelroute. Which contains some very clever belays, made for rappeling down very fast. Don't rappel down your route if there are any parties behind you!