Klenke
Add photos See all photos
The Previous Day
For the report of the previous day’s climb, click here.

The guidebook says 3 hours to reach Baldy and 5 hours to reach Gray Wolf Ridge--the Clallam County Highpoint and my primary destination. I also wished to climb Baldy and Tyler Peak as a traverse.

I took the very steep Maynard Burn Trail. I like it when trails take this angle. It makes for some quick elevation gain, in this case to the rhythm of 2,400 vertical feet per hour. I stuck to the trail instead of taking to the more direct southeast ridge of Baldy’s east summit (Pt. 6537). Someone made note of this in a trip report somewhere. The trail wanders rightward on Pt. 6537’s east slope and eventually gains the northeast ridge several hundred feet below the east summit. At least the trail way provided a good view of Tyler Peak—the only view I would get on this day. At the east summit I waited for a pesky cloud to blow off of Gray Wolf’s summit but it was not to be. I then carried on. I got to a few dozen yards of the summit of Baldy (6,827 ft) in 2 hours, 15 minutes. 3 hours? Okay, I suppose, if it’s really hot outside or you’re old or out of shape. I purposely didn’t complete that last bit to the summit of Baldy so I can say I climbed it after Gray Wolf. You don’t need to know why, really. The traverse out to Gray Wolf was super easy. I passed Pt. 6527 on the west on the way up. A few steep shale scree bits where the boot path was confused with game trails but all in all there were no crux concerns. The summit of Gray Wolf Ridge (7218F, 818P) has a notable upper East Face but that’s all I could see of it. Once again, just like yesterday atop Mt. Deception, I found myself looking at the inside of a white sock. Except this sock had a hole in the heel: I found myself looking out toward intermittent views of distant Mt. Olympus. Also, no register. The peak is within Olympic National Park so the lack of a register is not as surprising. But Gray Wolf is a county highpoint and they usually do have them.

To Baldy and Beyond

I returned the way I went up Gray Wolf except I went around the east side of Pt. 6527 instead. This seemed slightly easier and more direct. The re-ascent of those 500 vertical feet to the summit of Baldy (6827F, 547P) had me reminiscing better days propping up a bar. But, hey, at least I wasn’t bald on Baldy. The summit contains a large ugly cairn that I seriously contemplated knocking into oblivion. I’m glad I didn’t lest the hunters in the distance shoot at me for being so supposedly vandalistic. And since I had to go their way… My next stop was the summit to the northeast. As I climbed back over Pt. 6537 it really got foggy and this fogginess would stay with me. I happened in behind two hunters (a man and a woman). In hushed tones (all hunters whisper in the wilderness, it seems), the man wasted no time complaining about the other climbers in the area. He pointed to this garbage here and that garbage there. I saw a roll of electric tape hanging from a branch. Finder’s keepers loser’s weepers. The woman showed me a roll she had found that was significantly more used up. But in the end I was the most jealous when they told me of the three cougars they spotted earlier in the day. I’ve spent many an hour in the wilderness and have never seen a cougar. One day (hopefully not up close and personal).

The rest of the hike out to where I was going was kind of surreal. In the deep fog—a moist fog that was making my hair wet—I could hear nearby hunters’ voices but could not see them. Nor could they see me probably. They may have heard the faint click of my trekking poles. It was strange to be hiking right past them (at least within 50 yards of them) without seeing them.

In 6 hours and 20 minutes from the car I arrived at the summit of Tyler Peak (6364F, 444P). In a pea soup in no hurry to split having an altimeter helped me to know I was at the summit. But the easiest way to tell was the large red Suquamish Tribe flag in the cairn. Plus, there was a register.

I had thought the summit was seldom climbed but seeing all the hunters obviously meant that was not the case. The register was placed in June 2004 (the ubiquitous Mike Torok was in that party) and already there were pages and pages of entries.

The geology of Tyler Peak is very odd and is mostly comprised of a green conglomerate that is very grippy for climbing over. It forms weird pinnacles and outcrops. 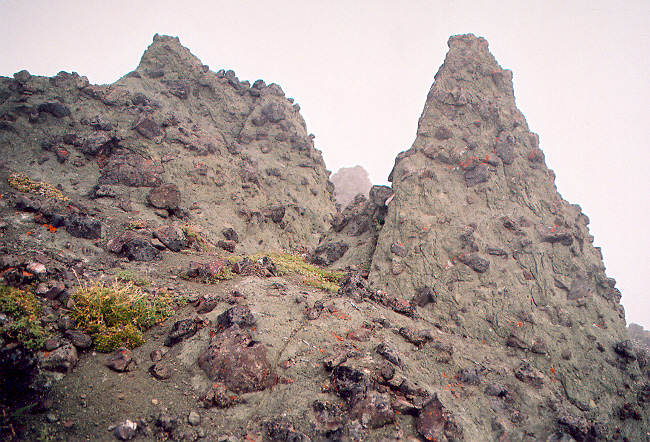 For the descent I was only 3,200 vertical feet and less than one-and-a-half miles from the car. How quickly could I get down? I left the summit at 1:48PM. I wanted to get back to the car at or before 3:07 to make it within my specified 8 hours.

I descended off the south side of the summit into the upper basin there and began a long angling descent leftward at about 5,200 ft. I saw that I had descended the first 1,000 feet in 15 minutes. “I think I’m going to make that 8 hours,” I said just before I got stuck in some brush. “Where did this come from? Tight trees everywhere!”

Eventually really open forest greeted me and I found myself at the car with 10 minutes to spare: 70 minutes to descend 3,200 feet through mixed forest. Not bad.

Epilogue
This epilogue is for my peakbagger friends…

On the way home I made several stabs at the prominent radio-towered summit on the northeast corner of the Olympic Peninsula. This summit is right at the bend of Hwy 101 by Port Discovery bay. More specifically, the summit is on “Miller Peninsula” and has a healthy prominence.

I finally found the correct road from the little town of Discovery Bay southeast of the summit. The road is Casellary Road and it cuts off West Uncas Road.

Casellary Road turns to gravel. At the fork with the big yellow gate on the right, go right (if the gate is open) and drive for a couple more miles. A second big yellow gate is here maybe a half-mile from the top. I walked the road the rest of the way to the summit of ”Blyn Mountain”* (2120+F, 1240P). Not really any views up there unless you’re tall--as in 20 feet tall. That’s too bad considering the mountain’s position. Note that you can see this peak from Seattle but it’s low on the horizon so you have to be in the right place. Note also that Tyler Peak and Baldy are visible from North Seattle.

* I’m calling this summit “Blyn Mountain” (named after the nearby town to the west, the HQ of the Suquamish Tribe) because that is what was written on an official looking sign on the fence of one of the many enclosed radio tower facilities there. This Blyn Mountain is not to be confused with Blyn Lookout (1,966 ft) 2.1 miles to the WSW.