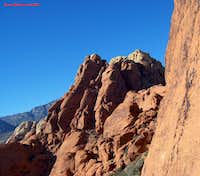 The Great Red Book is mostly associated with one of the more popular as well as shorter classic Red Rocks climbs, a two pitch left facing dihedral that makes up the “binder” of the “book”. To the left and right of this corner are a multitude (16!) of routes, mostly long single pitch mixed, that make up the Great Red Book climbing crag area at Calico Hills. 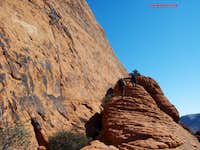 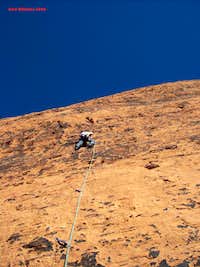 Dangling Principles, 5.8
My visit to Calico Hills was quite late in regard to my Red Rocks experience. I had climbed over a dozen of the larger routes at the west end always bypassing Calico Hills on my visits with the exception of one trail run via my very first visit to Red Rocks. Red Rocks was never a “sport climbing” destination for me, thus I never paid Calico Hills much attention. However during the winter months of January-February, there can be days where Calico Hills can be quite inviting compared to its larger brethren to the southwest. One such cold day, I and two of my Canadian partners took on the classic 2-pitch trad Great Red Book route and then started eyeing the local sport climbing lines basking in the afternoon winter sun. The Great Red Book route was darn cold early in the morning, but we got it out of the way then hit the much sunnier long sport routes on the face to the east.

The Great Red Book wall is the large red wall to the northeast facing the 2nd pull out of the Red Rocks loop road. The Hunter S. Thompson Dome is to the left and is recognized as a white face topped by a large roof. To reach the Great Red Book climbing area from the parking area for the 2nd pullout, descend the main trail taking a right at the first opportunity. Take the first left (50yds) and continue your descent down into the wash. Cross the wash to the right and continue heading north. Some 30’ below the top of a shallow gully, turn right again and follow a ledge around to the right into a flat area. To your left is an obvious steep climbing area which should have tons of chalk on it (Sweet Pain Wall). Ascend the gully past Sweet Pain and scramble right again past the base of Hunter S. Thompson Dome. Scramble up east until you are below the Great Read Book. There is a large gully draining down from the dihedral. Worst case scenario on the traverse is you can descend and start up the base of this gully.

These routes range in age from anywhere between the 70’s to as late as 2004. Some require gear and some are completely bolted. 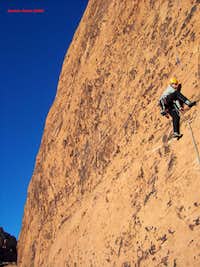 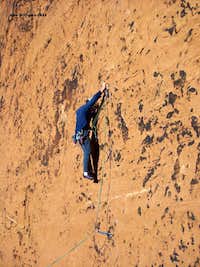 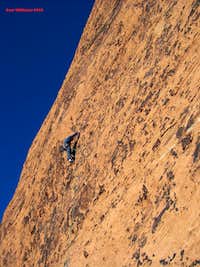 To the Left of the Great Red Book


Corner does not see light until noon in the winter. I placed that number 4 too early on the 2nd pitch. There is a solid pocket that takes it as you start into the corner....but other options are there. Save it for the lie back further up where the corner bends right. You can slip a #3 in here as well, but only after you make the crux move of the route. Thought the lower pitch was quite soft....upper pitch seemed true to grade, which call for the face above the belay at 5.8, the lie back 5.7 and the face above the corner at 5.6.

To the Right of the Great Red Book


(photos) Mark Limmage added both of these pure sport routes to the wall in just the past few years (2004). They make perfect steep lines on varnish to fixed anchors. Be careful how you belay these routes. For the belayer to sit in the sun, the climber actually starts below the belayer, scrambling down into a narrow slot and then climbing the routes which are side by side. Of course the climber could easily pull the belayer off into the slot with a fall if folks were not paying attention. There are bolts on the south side of the top of this feature where you are tempted to sit for the belay. You just need to find them or lay down and spread your center of gravity. Fourteen bolts to anchor.
(photos) Same as Dangling Participles pretty much. Neither are difficult for the grade, but both are steep. They definitely make for solid warm ups. Only seven bolts to anchor but it did not feel any more exposed than Dangling Participles.

One 60m rope will do you as you can scramble off the top of the Great Red Book. The routes either reach the top or can be rapped with a single line. Although there are a few fully bolted sport routes, most require gear or a combination of thereof. A ton of draws/slings, some of the pitches are long.