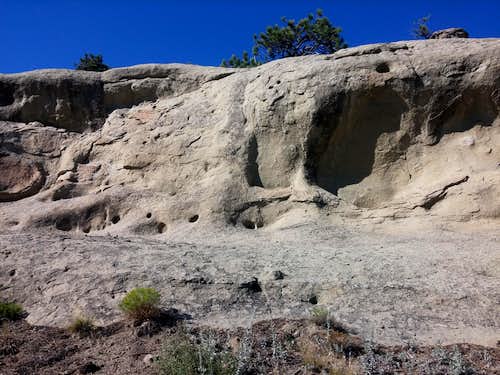 On Top
As a city on the Great Plains, albeit only a little more than an hour's drive from the Beartooths, Billings probably does not strike one as a site for rock climbing, but it in fact boasts sandstone cliffs called the Rimrocks that have an assortment of short but fun trad, sport, and toprope routes.
The Rimrocks subdivides into several areas, and not all are contiguous. Of them, the Gregory area is the best site and has the most routes (around 90). Named for the Gregory subdivision, this area is just west of Billings Logan International Airport. If you live in Billings and are lucky enough to get a house that backs up to the cliffs, you not only have an awesome view from out back but also can literally walk just a few minutes from your house and be climbing.
Although Gregory is not a destination crag that is going to make the lists of climbers from all around the country, it offers nice climbing and is a fantastic resource to have so close to Montana's largest city (actually, it is within the city limits).
On Mountain Project, Brian Hagerty has obviously put in a lot of time developing a page for Gregory. In addition to doing write-ups for most or all of the routes listed on the page, he has posted a series of photos identifying most of the routes. His information proved invaluable to me on a day when I had some hours to kill in Billings and felt like doing some climbing.
As such, this SP page is not an attempt to replace his as the best online source of beta for Gregory and the Rimrocks. Instead, I've posted this page to help SP users learn of this location. If you're serious about doing some climbing there, please go to Hagerty's page after gleaning any information you need from this one.
Routes here range from 5.5 to 12c. Most are in the 5.8-5.11 range. These are single-pitch routes. 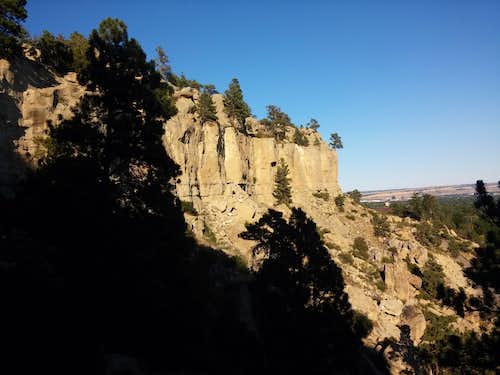 From Rimrock Drive in Billings, turn north onto Gregory Drive. Bear left as it becomes Gregory Drive North. Turn right onto Rockwood Circle and park. The access trail begins by a fire hydrant, and it meets the base of the rim at the route Excuse Abuse (see photo in next section). Excuse Abuse is close to the right end of the established routes.
I did notice that there were some spiderwebbing trails.
Basically, you can't not get to the cliffs. Then use pictures from this page and Hagerty's to locate specific routes.

The Mountain Project page currently lists 87 routes. I am not going to list them all here. Instead, I will comment on the rock quality and climbing options based on my experience there and on what I have read from the other source. Additionally, this page includes photographs of some of the routes. Those pictures are arranged from left to right as one faces the cliffs.
This is not the hard, solid sandstone found in many parts of the Southwest. Instead, it is softer and often chossy. It is gritty to the point that I felt the climbs I did were soft for their grades, but through the date of posting this page, most of my climbing has been in areas known to be stiff for the grades, so it may be that the grades at Gregory are "just right."
Also, I did not lead the routes I climbed, and things always feel harder on lead. Having flown in and out of Billings on my summer mountaineering trip, I did not have much gear. Using hiking shoes, a long runner for a harness, a 30m 8mm rope that I had packed for emergency rappels, and my ATC guide as a self-belay device (stopping to tie knots that would jam in the device in the event of a fall), I only climbed some easier routes I was very unlikely to fall on. So keep that in mind when evaluating how true to the grade the climbs here are. 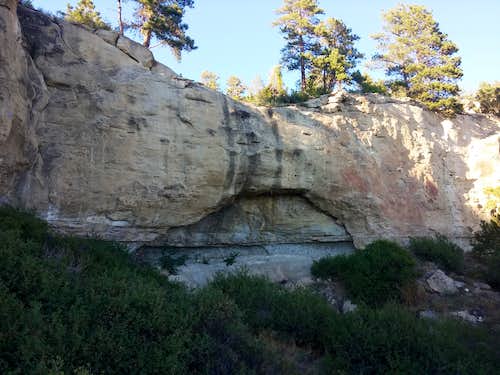 Alcove
Trad-- There are several leadable lines. Often there are flakes that make good holds but which probably cannot hold a fall. Personally, I would prefer to lead with passive gear here out of concern that a cam could blow up the soft rock during a fall, but it's obvious from comments on MP that most people use cams on lead here.
Sport-- There are some bolted routes out here, but Hagerty warns of loose bolts and bad bolting. When I climbed Slabarrific, an easy bolted route, via solo-TR, I found a loose bolt. Caveat Emptor.
Toprope-- It's not the sexiest way to climb, but it's probably the smartest here. Most routes have anchor bolts above them, and most that I observed seemed to be pretty good. But there are two things to consider. First, many of the anchors are atop the cliff, not just below the lip, so you will still need webbing or cord to build a safe TR anchor. Second, since it's often considered poor form to TR off bolted anchors above trad and sport routes, consider building an anchor using trees and rock features instead.
To access the top in order to set a TR anchor, climb the chimney shown in the first picture below (Class 4) or hike to the far left end and find a way up from there. The chimney is a lot easier than it looks from beneath. In fact, when I first tried it, after being told by another climber that it was around 5.5, I found it intimidating and bailed after a little way up. Instead, I free soloed Walkup (second picture below) to set up a TR anchor for something else. Then I gave the chimney another look from above and got down it quite easily. So anyway, it's much easier than it might appear to be, and it's a much better option than the walkaround one if you're going to be climbing routes around the middle or the right end of the crag.
Update-- I heard from Brian Hagerty, author of the referenced MP page. He confirmed that it's okay to TR off the anchors as long as you have cords/slings/etc. to extend. Additionally, he said cams work in the rock here, but he added that the bigger, the better.

Other than making sure not to trespass on private property, there seems to be none.

All year. Spring and fall are probably best. Summers here can be really hot, and the heat radiating off the sandstone can make one feel as though he is in an oven. In the summer, climber either early or late in the day. Almost all of the routes here face south, so winter climbing can sometimes happen on sunny days when the wind isn't bad.

Nothing close by. Shell out for a room.