The Ohrenspitzen are three border peaks in the Rieserferner Group, located northwest of the Austrian-Italian border crossing at the Staller Sattel / Passo Stalle (2052m).


Note: After WW I, Austria lost South Tyrol to Italy. Most geographical features only had a German name, but during the Italianization period they all received an Italian one.

If I know the Italian name, the first time I mention a feature I give names, German first because that is the main language used in the area. For the sake of readability, I only use one name after that. Furthermore, occasionally the English translation is used instead.
Although only 3 km from the Staller Sattel and towering more than a thousand meters over it, the mountain doesn't get all that much attention. I can think of several reasons.

First of all, the normal route is UIAA grade II, which rules it out as a hiking peak. Secondly, it's fairly long as a day trip from any roadside trailhead, with a long approach and a short scramble. And last but not least, Hochgall / Collalto, the highest mountain of the Rieserferner Group, lies just 1.5 km from the Riepenscharte, so mountaineers are much more likely to go there instead. In fact, when considering 337 m prominence insufficient to see the Große Ohrenspitze an independent peak, it would be just a subsidiary of Hochgall. 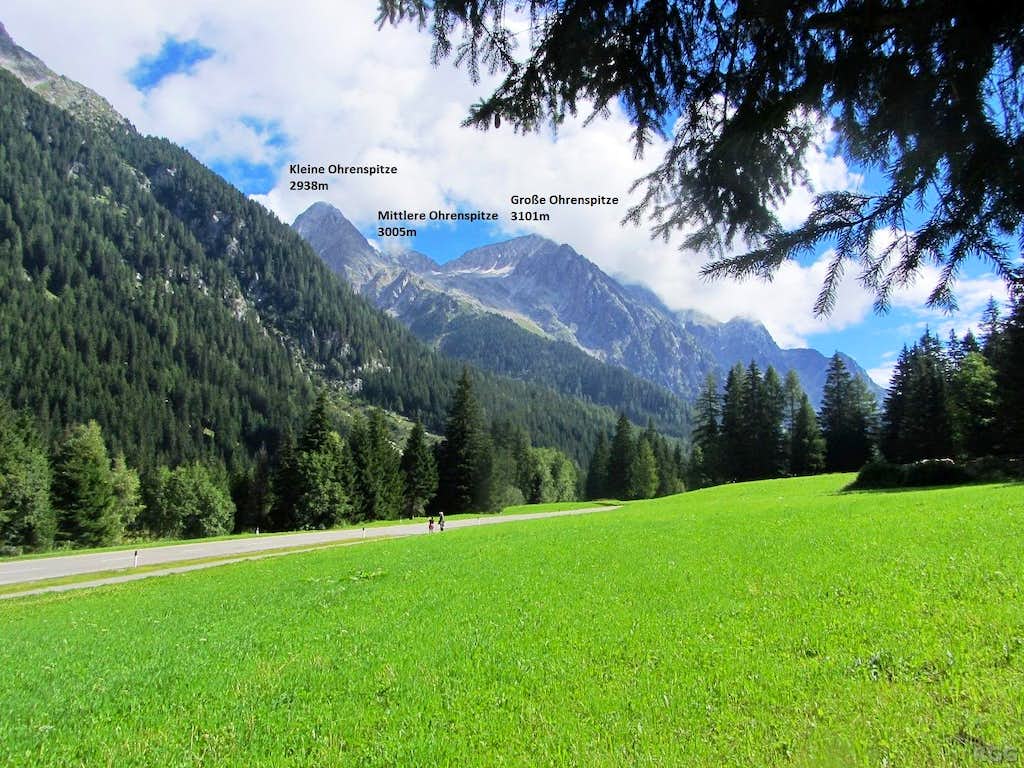 View from the upper Antholzer valley, one kilometer or so west of the Antholzer See 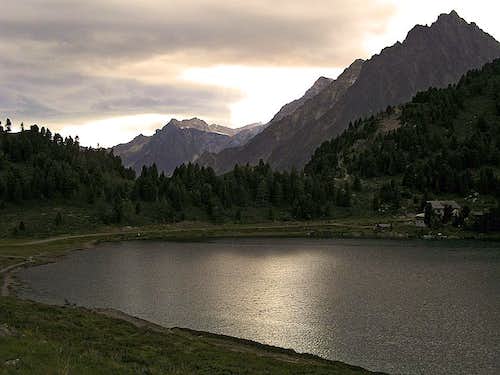 On the banks of the Obersee, zooming in on Wildgall (3273m)
The main relevant trailheads are the Obersee (2016m) ("See" means lake) right next to the Staller Sattel, the Antholzer See / Lago di Anterselva (1640m) and the Patscher Alm (1685m).

From Italy, the Staller Sattel is at the end of the Antholzer Tal / Val di Anterselva, a side valley north of the Pustertal / Val Pusteria. At the end, the winding road up to the saddle is small and one way, alternating between upward and downward traffic (regulated by traffic lights, with extended pauses in between to give stragglers time to clear the road). The Antholzer See lies a few kilometers from the saddle, before the road gets small. The village of Olang / Valdaora is the gateway to the Antholzer Tal.

From Italy
Bus 431 from Bruneck / Brunico to the Antholzer See takes about an hour. The bus passes through Olang, which, like Bruneck, has a train station. For more information, see Südtirol Mobil - Mobilità AltoAdige.

From Austria
During the summer season, the Staller Sattel is the last stop on bus service 4414, coming from Huben in Osttirol (one hour). Huben is a local hub, with bus connections in several directions. The most convenient train station is Lienz Hauptbahnhof, bus line 1412 (25 minutes). For more information, see ÖBB.

There is no public transport to the Patscher Alm, but bus 4414 stops at Erlsbach, 18 minutes or 8 km from the Staller Sattel. 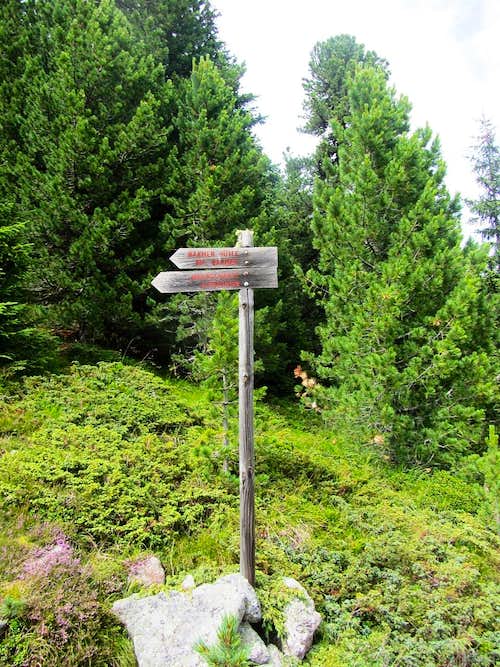 Signpost near the Staller Sattel, pointing to the Barmer Hütte, Jägerscharte and Almerhorn. No mention of the Ohrenspitzen, but this is the trail.
From the Staller Sattel, trail 114 winds its way up to the Jägerscharte (2870m), then turns east across the lower northern slopes of the Ohrenspitzen, eventually to the Barmer Hütte. Along the way, a short side trip from the Jägerscharte leads to the Almerhorn (2985m), a nice viewpoint. From the Antholzer See, trail 39 goes north to the Riepenscharte (2764m), then descends as trail 112 to the same hut.

The two can be combined to make it a circuit around the Ohrenspitzen. After starting at the Antholzer See, from the Staller Sattel the circuit is completed by an hour descending mostly pleasant trails in the forest, (less pleasant is that the trail crosses the winding road several times) and along the banks of the scenic lake (trail 11). Without the Große Ohrenspitze, I estimate 8 to 10 hours for the whole circuit. To add the Große Ohrenspitze itself (2.5 to 3 more hours) you better be fast, or it will turn into a very long day.

From the Patscher Alm, trail 112 ascends the Patschertal up to the Barmer Hütte (2610m). Normal time is about 3 hours. Starting at Erlsbach adds 3 km easy hiking up the Schwarzach valley, ascending 136 m in the process. 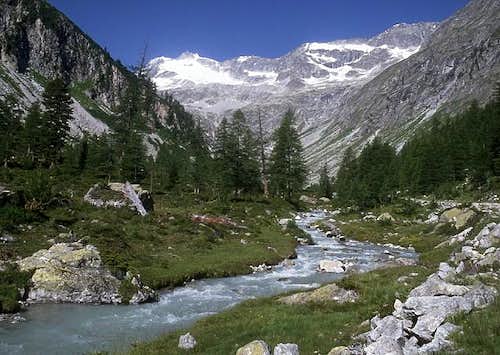 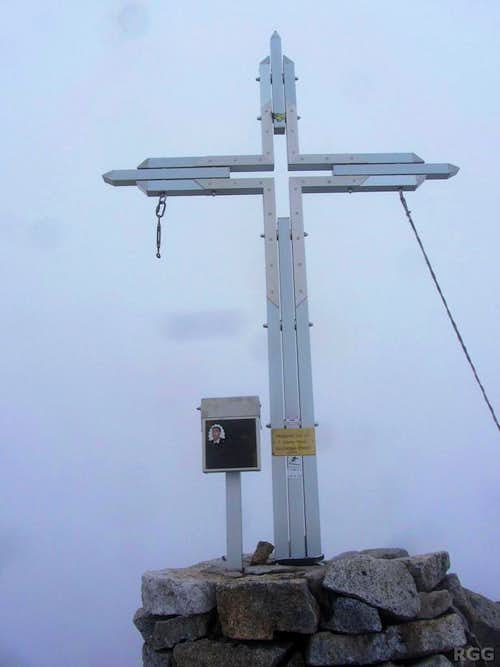 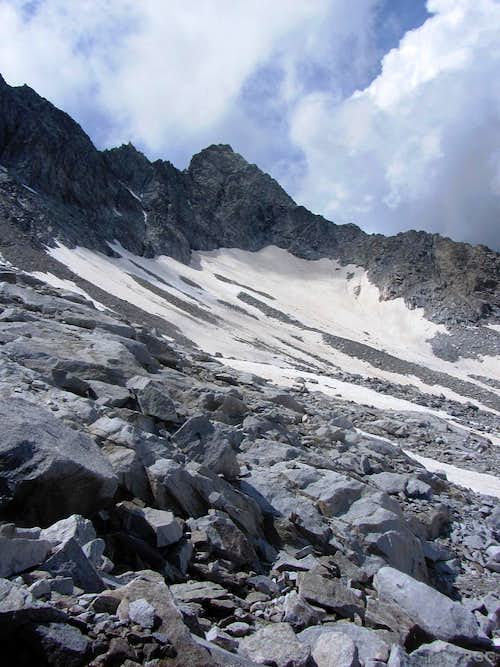 This used to be the Almerkees, but the glacier is gone. What's left is a talus field and old snow
The normal route follows the northwest ridge from the Remscheidscharte, the wide saddle between Mittlere and Große Ohrenspitze. At first the ridge is steep, with climbing up to UIAA grade II. Located a bit left of the actual crest, the steepest section is secured by chains. The rocks are not always solid, but on the steepest section the rock quality is fine. After ascending some 150 m, the ridge widens and flattens. 45 minutes is a normal time for ascending the NW ridge.

There is no proper trail to the Remscheidscharte itself, but the saddle is obvious from the hiking trail (no 114) that heads east from the Barmer Hütte towards the Jägerscharte, and beyond that to the Staller Sattel. The trail runs along the lower northern slopes of the Ohrenspitzen, where once the Almerkees glacier flowed. About half a kilometer east of the hut, past the north ridge of the Mittlere Ohrenspitze, you can easily see the saddle and it's time to go off trail. Some cairns help navigating the talus field.

In recent years all but the last remnants of the glacier have disappeared. It's just a rough talus slope now, sometimes with snow well into the summer. In August 2014 there was still a fair amount higher up, which was useful in covering the scree. Lower down the talus field wasn't the most enjoyable part, and a bit cumbersome to overcome. The slope leading up the Remscheidscharte isn't particularly steep, and unless it is really icy crampons should not be necessary. A normal time from the hut to the saddle is 1.5 hours.

The Mittlere Ohrenspitze can be climbed from the saddle as well.

The Jägerscharte (2870m) marks the start of the long and jagged east ridge, with many ups and downs. There is one spot of UIAA grade IV, but mostly it is III and II. The Jägerscharte can be reached from the Barmer Hütte in 1.5 to 2 hours, or from the road at the Staller Sattel in about 2.5 hours, in both cases following trail 114. 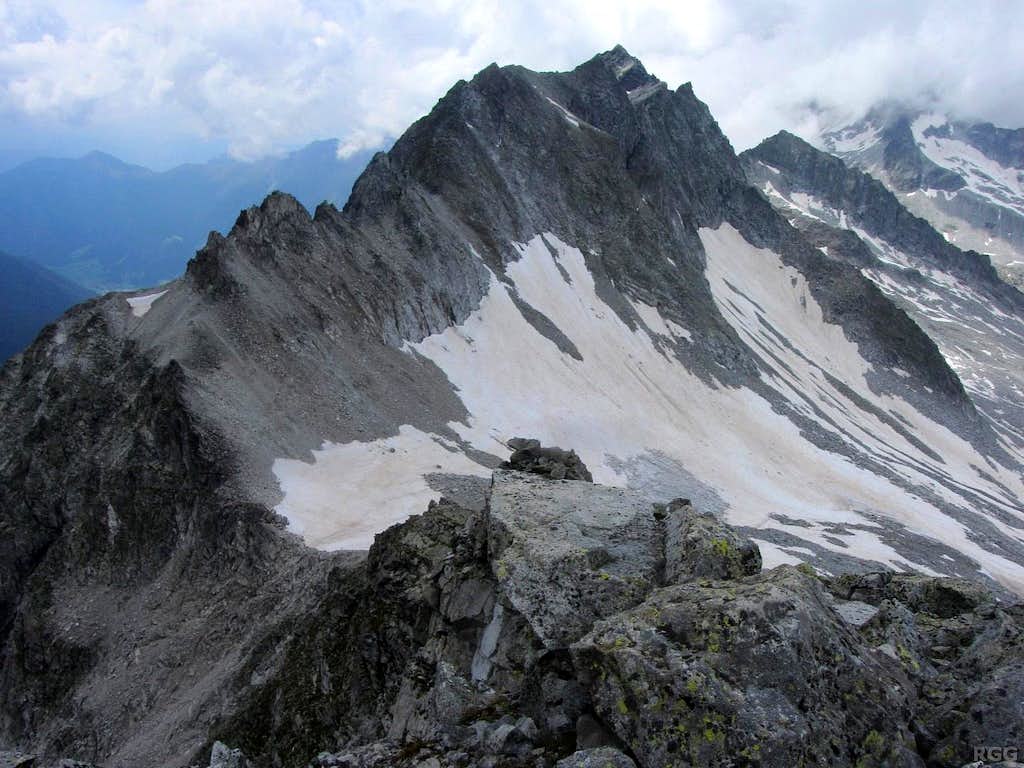 View from the Almerhorn, prominently featuring the jagged east ridge of the Große Ohrenspitze.

Roughly from east to west, the Austrian-Italian border follows most of the east ridge of the Große Ohrenspitze, then over the Mittlere and Kleine Ohrenspitze to the Rieperscharte. Almerhorn and Jägerscharte lie in Austria. There are no border controls.

The Italian south side is at the edge of the Italian Rieserferner-Ahrn Natural Park, but no special restrictions apply. Camping is not allowed, high alpine bivvying is.

The Austrian north side is on the border of the Hohe Tauern National Park. No camping, bivvying only in emergencies, no fires and dogs must be on a leash at all times.

In winter and early spring there are plenty of ski touring possibilities in the area. To ski down from the summit of the Große Ohrenspitze would be asking a lot, but downhill from the Almerhorn is a good option, as are descents from the Remscheidscharte, Jägerscharte and Rieperscharte. 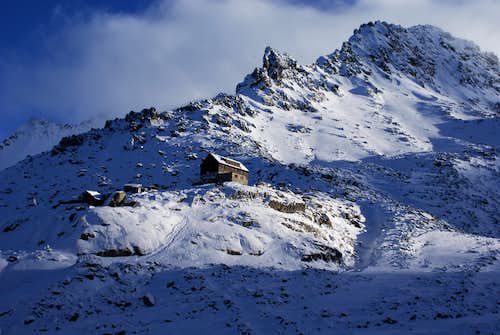 Barmer Hütte
The Barmer Hütte is ideally placed for climbing the Ohrenspitzen as part of a multi day trip.

The Italian Antholzer Tal is a popular winter sports area, with plenty of places to stay. Conveniently located for the Ohrenspitzen is the Enzianhütte, very close to the Antholzer See and right along the road as well as the trail to the Staller Sattel.

On the Austrian side of the Staller Sattel, next to the Obersee, lies Alpengasthaus Obersee.

Also in Austria, at the Patscher Alm, lies Alpengasthof Patsch. 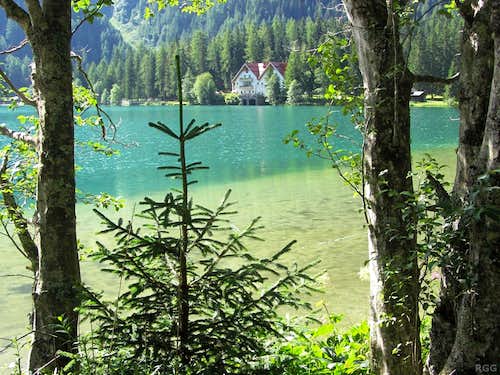 Antholzer See
Rieserferner Gruppe (Alpenvereinsführer), Werner Beikircher, 1983, Bergverlag Rother. ISBN 978-3-7633-1227-6. In German and out of print. Apart from the fact that the Almer Glacier is gone, the information on the Ohrenspitze and surrounding trails is still pretty good.

The scale 1:25 000 Tabacco maps are the most detailed. There are no less than three to chose from: map 32, Antholzer Tal - Gsieser Tal / Valli di Anterselva e Casies, the adjoining map 35, Ahrntal - Rieserferner Gruppe / Valle Aurina - Vedrette di Ries, or the special map Naturpark Rieserferner-Ahrn / Parco Naturale Vedrette di Ries-Aurina. In all cases the Ohrenspitzen are near the edge of the map.

Covering a larger area are the adjoining 1:50 000 Freytag & Berndt maps WK 123, Matrei-Defereggen-Virgental, and WK S3, Pustertal Bruneck Drei Zinnen. Either one is good enough, they both have the Ohrenspitzen and all the relevant trails and roads nearby. For the record: the maps that I bought more than a decade ago show the Almer Glacier north of the Große Ohrenspitze, but perhaps the newest versions are better.

A German Route Description with some fine photos, with a variation on almost the complete circuit from Antholzer See to the Staller Sattel, including side trips to the Große Ohrenspitze and Almerhorn. 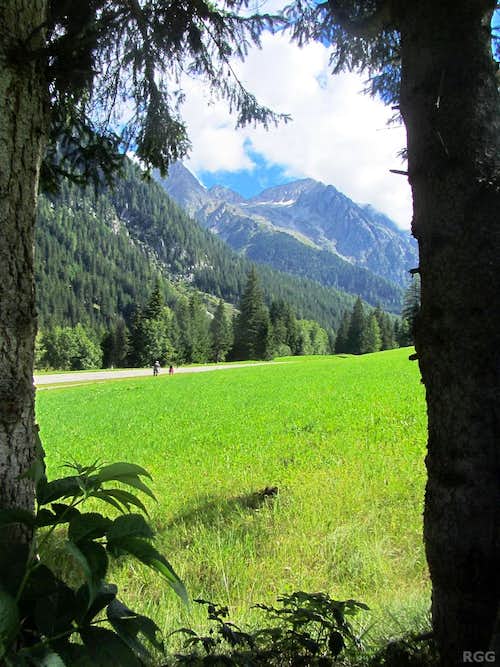