The Gros Ventre Range sits entirely west of the Continental Divide of North America and is a member of the Central Rocky Mountain chain. It is the sixth highest mountain range in Wyoming. Located in the northwest corner of the state, it runs west-east from the town of Jackson to the Green River just opposite the northern end of the Wind River Range.

Situated directly between Wyoming's two best-known theaters of mountaineering (Tetons and Wind Rivers), the main range is commonly overlooked with most mountaineering activity centered in the immediate Jackson area. The main crest of the range is composed of limestone (solid in places, loose in others) and shales. The Gros Ventres have long been known for the nation's largest migratory herds of elk, and antelope as well as plentiful moose, bear and a radio-collared wolf pack. Climbers tend to concentrate in the western end of the range on visible peaks and practice rocks in the section that provides the SE border of Jackson Hole. The most concentrated use occurs near the Gros Ventre Slide, Granite Hot Springs, and areas immediately adjacent to Jackson. The high peaks are not heavily visited.

This range is more renowned for trophy hunting, fishing and snowmobiling, as the dozens of outfitters permitted to operate in the Gros Ventre area will attest. It is also known for its powder skiing at its westernmost point, the Snow King ski resort; and throughout the backcountry, which is largely composed of glades below timberline and snow-catching basins above.

The range is also home to the world's largest elk herd. The annual migration to lower Flat Creek and the wintering herd at the National Elk Refuge are legendary. 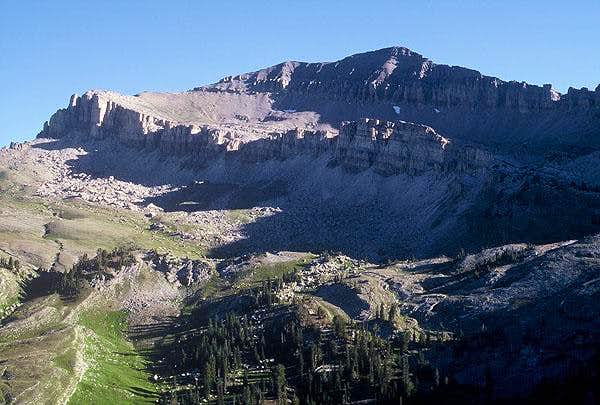 The highpoint of the range, Doubletop Peak, and the head of Dell Creek (the south side of the range crest above the town of Bondurant, Wyoming). Photo: jimmyjay

The limestone nature of the range gives it a character more in line with ranges towards the Great Basin (Utah) than those in the neighboring Rockies (Wind River Range/Tetons). This is because the range, uplifted post-Cretaceous, is partial to the Overthrust Belt and the Sevier Orogeny as well as to the Laramide of the Rockies. Nonetheless, granitic and other solid composites present at various locations throughout the region, notably at the practice rocks on Blacktail Butte in the valley floor of Jackson Hole as well as the Open Door pinnacle which towers above the swimming pool at Granite Hot Springs.

NAME:
The Gros Ventre (gro-VONT) Range is named for the Grow Ventre tribe of Native Americans. The tribe was nomadic and routinely journeyed through this area after visiting as far north as the Blackfoot tribe (Montana) or returning from the Arapahos on the Front Range plains of Colorado. Anthropologists consider them a branch group of the Arapahos due to linguistic similarities though the sharing of members with the Flathead, Shoshone and Nez Perce blurs the distinction. The name Gros Ventre is a French Trapper term which translates "fat stomach" (gros is "fat", as in obese; gras as in "Mardi Gras" is "fat", as in grease). Communication amongst these peoples was through sign language and the sign referring to this tribe involved a gesture with hand in front of the stomach rotating at the wrist; hence the name, in French.

The Snow King ski area is one of the oldest on the continent and brought lift-served skiing to Wyoming in the 1930s followed by one of the first chairlifts in the world at the end of World War II. It is the fourth-largest in the state in acreage and the third-tallest measured vertically.

With the building of the backcountry ski cabin on Jackson Peak in the 1950s, the glisse trend currently sweeping the country became an institution amongst residents very early on. Thus, backcountry skiing continues to make Jackson Hole a flashpoint amongst ski mountaineers worldwide. 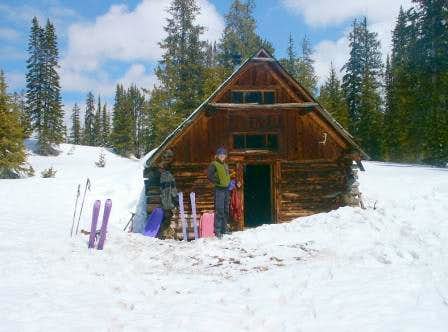 The ski cabin is reserved through the Forest Service.

The highest peaks of the range:

The most well known peaks, however, are those visible from within Grand Teton National Park: Jackson Peak), Sheep Mountain (known for its Sleeping Indian formation), Gros Ventre Peak (visible above and behind the town of Jackson), and Snow King Mountain. 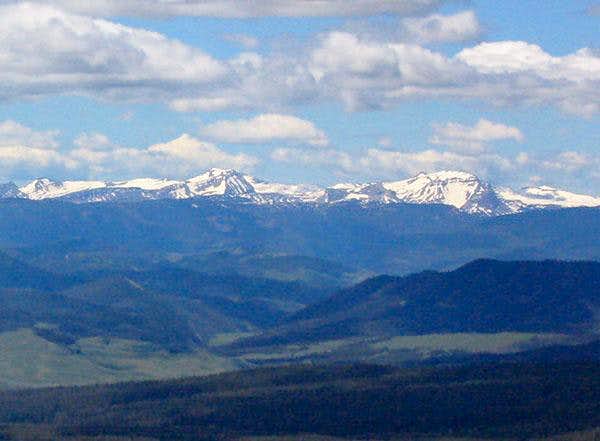 There are four main access points for the mountaineer. They are all accessible in a medium-clearance passenger car. Unlike much of the Rockies, a 4WD saves you nothing in this range.

North Side
The Gros Ventre River road (gravel) is accessed via Kelly Wyoming by turning east from highway #191/26/89, nine miles north of Jackson.

West Side
Reached from a small parking area on the east side of the town of Jackson (Cache Creek) or by traveling through the Elk Refuge.

South Side
The foothills of the range on this side are almost entirely private land. The main access road (and the only road that penetrates the heart of the range) is the Granite Hot Springs Road (gravel) which begins 10 miles east of Hoback Junction on the way to Bondurant.

East Side
For approaches to the Upper Gros Ventre River and Tosi Creek, see Doubletop Peak.

The alpine areas of the Gros Ventre Mountains are managed as the Gros Ventre Wilderness of Bridger-Teton National Forest. Wilderness regulations apply for camp locations, group size, campfire restrictions and ethics. Roads can remain closed until early June. The original Gros Ventre Wilderness was created by the state of Wyoming in 1984. The Clinton Roadless Initiative secured additional terrain. More recently, the area has narrowly escaped drilling and construction which seem to continually threaten this range.

Summer season in the Gros Ventres is generally late June-late September with roads opening by early June and snow lingering on the higher trails into July. A snowstorm is traditional between the last week of August and the third week of September. This is often followed by a dry period with crisp temperatures for 1-4 weeks. During fall hunting season you would be remiss to play here without wearing Day-Glo orange. Due to its position in the Central Rockies and its east-west trend, the range receives ample snows from November to early June and melts late considering its altitude.