The landmark of Schwyz town is very popular, because the mountain is nice and The Society of Mythen Friends is very active. It was founded even in 1863 and in 1865 already the hut was built on top of Grosser Mythen. In the hut on top, there is the table, reserved for those who ascended Grosser Mythen at least 100 times in a year. And they count also cumulative record holders. Many of them are masters of the hut. A. Klein, for example, was on top already more than 4500 times. Otherwise in nice summer days more than 2000 visitors come on top, and in a year more than 30000.

The normal route on Grosser Mythen is steep, but well built, broad and absolutely protected. It offers you an amusing hike up on a very panoramic summit. 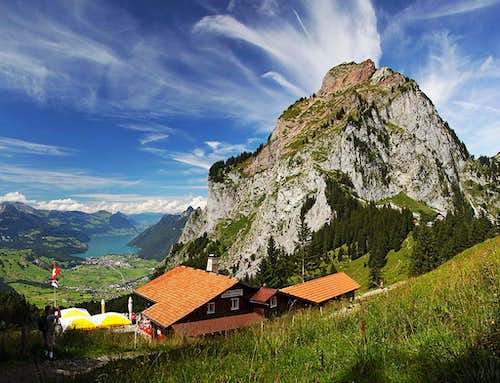 Grosser Mythen from Holzegg - the path on top is clearly seen.

Difficulty: It's a hiking tour, due to massive visit overprotected. On the Swiss Hiking Scale its difficulty is graded T3, but that is more due to a steep terrain and a possibility that in crowds there are also unexperienced hikers. Actually the route is not more difficult than a steep staircase - so the rating would be rather T2.

Orientation: You can't miss the trail.

Exposition: Some places are exposed, but there are strong steel cables, also on both sides of the trail.

Objective dangers: Some danger of rockfall - more due to many visitors. When the slopes are icy or under snow, the hut is usually closed.

Best season: When the hut is opened (normally May-November; from the valleys see the flag by the hut).

Best time of a day: The slopes, where the route goes, are east and south-east oriented, so very hot in the morning.

Holzegg can be reached from three sides:

1. From Schwyz. By car we can drive only little above the town, so we have some 1 h 30 min to walk till Holzegg. Now (2014) the cable car on the neighbouring Rotenflue is in renovation. When it operates again, the majority will take the cablecar and then from the upper station walk less than 30 min to Holzegg.

2. From Alptal. In the end of that valley is Brunni tourist resort, where on 1102 m there is a big parking place. From there on Holzegg a chair-lift drives. On foot, you have less than 1 h to the saddle. Today, this is the most used trailhead for Grosser Mythen.

The panorama of Glarus Alps from the hike Ibergeregg - Holzegg 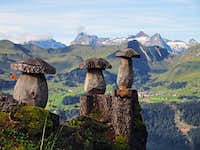 The scene on an alpine pasture

3. From Ibergeregg road pass, 1406 m. This is also an interesting option, because you have to Holzegg saddle only an easy walk by a panoramic ridge. On the road pass there is a hotel, which occupies all parking places, but just below it, you can still find also free parking lots. The hike to Holzegg is really nice. You just hike almost all the time on the same altitude. As there are alpine pastures on the ridge, you all the time walk by a cart-road, which is however closed for public traffic. Nice also for bikers. On the approach, we most of the time have Grosser Mythen in front of us. The path detours the hill of Rotenflue by the northern side. 1 h. 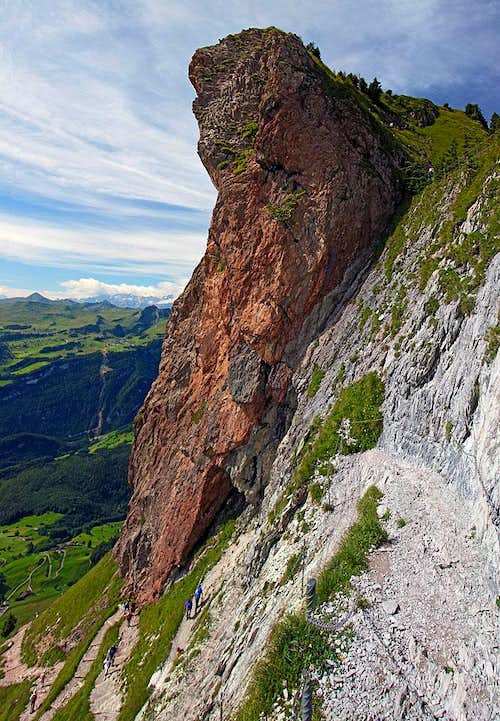 At the Red wall

Once we are on Holzegg saddle, the route almost till the summit of Grosser Mythen is clearly seen. We see it, winding in many turns up the steep slopes above the saddle. Only just below the top we don't see how it goes right on the summit ridge. Supposedly the path has 47 turns.

From the chair-lift station the path goes only some 50 m up through a shady forrest. Then it reaches the rocks of Mythen, the plate warns us that the path is demanding and the real ascent begins. A turn follows a turn. The slopes are steep and some care is also needed when meeting (or passing by) people. At first the path goes over a passage towards the left, so we soon find ourselves above almost vertical abysses. Then it continues in turns straight up. Above us, left of the characteristic red wall, we see the hut, but the path will not go straight to it. Rather it goes right, towards the foot of the red wall. On the turn No. 29 there is a cute bench, but it can host only a little number of sweatened hikers.

Below the red wall the path turns right of it. The place is very picturesque. A bit higher we reach the white rocky step. The path attacks those rocks directly. Over the steep slope a broad enough and well protected passage is carved. So the path reaches the exposed east-northeast ridge and follows it till the steep grassy slopes north of red rocks. With a few turns the path overcomes also those grassy slopes, reaches the summit ridge and to the nearby hut we have only a few more minutes.

The descent of course goes by the same route.

A 360 degree panorama from the top.