SzaniUherkovich
Add photos See all photos
The mountain’s official name is Großer Pfaff. It is also referred as Grosser Pfaff, and I will use this writing mode on this page 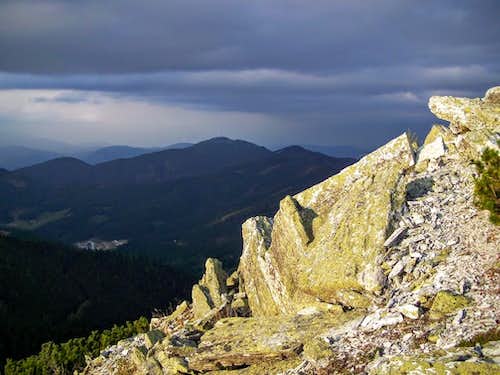 Rocks of Grosser Pfaff with view to Sonnwendstein 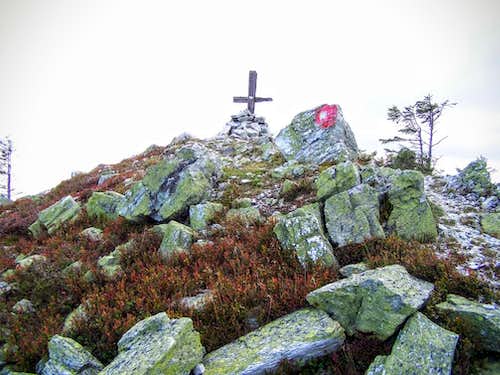 The peak of Kleiner Pfaff
Generally neighboring mountains groups or mountains have a distinct border line: a valley or a saddle. Not this is the case 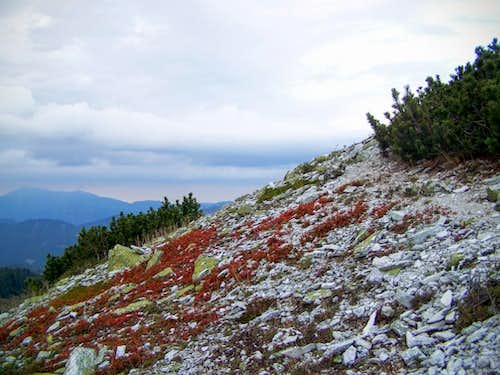 A scree slope of Grosser Pfaff
with Wechsel Mountains and Stuhleck. They are separated by two saddles. These two saddles are only in 5 km distance from each other. Their height is nearly the same. The saddle on the west is called Pfaffensattel (1372 m), while the saddle on the east is called Feistritzsattel (1298 m). Both saddles can be easily accessed on good paved roads both from north and from southern direction. 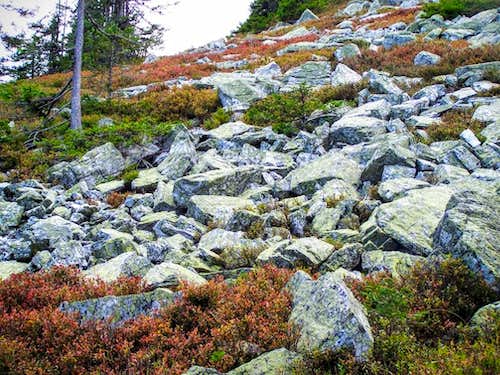 I am a frequent hiker in the woods of Wechsel and Stuhleck. I must admit that they are not among the most interesting mountains of Styria and that of Lower Austria. They have rounded – almost flat – hilltops. They are built of boring grey 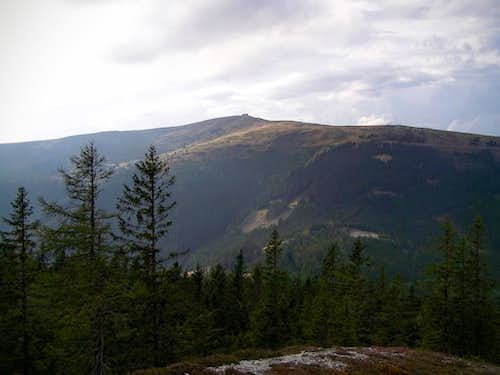 View of the neighboring Stuhleck from Kleiner Pfaff
crystalline rocks (perhaps schist). Their vegetation is quite uniform: spruce forest on the hillsides and opened grassy hilltops. But this is the nearest part of the Alps to my home. This is why I come here so frequently, though these mountains are not exciting at all.

It has a very different character than either Stuhleck or Wechsel. Its building material is not grey but a very white rock. It looked to be dolomite. It might be in connection with the neighboring Sonnwendstein that is built of dolomite, too. The white rocks can be seen everywhere around. It looks to be not a very fertile base rock for vegetation. Grosser Pfaff and Kleiner Pfaff have shape like real peaks (not as the summits of Wechsel with their flat hilltops). They even have scree slopes. And there are dwarf pines on the summit of Grosser Pfaff! A real mountain in Central Europe must have dwarf pines on it. (A big defect of Wechsel is the lack of dwarf pines).

Grosser Pfaff is in Styria – but the border of Lower Austria is in less than 2 km distance. 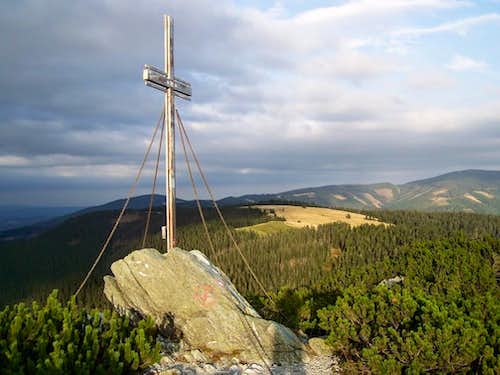 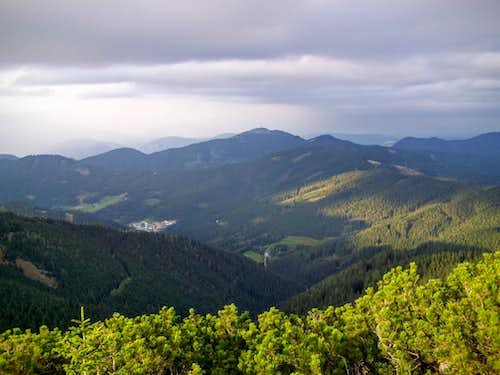 The view of Sonnwendstein from Grosser Pfaff
The peak of Grosser Pfaff is rocky and it is partially covered with dwarf pines. The top is crowned with a nice summit cross. There is a good 360 degree view from the peak around. The best is the view of Stuhleck.

Let me show some photos about the attractive vegetation of the area: 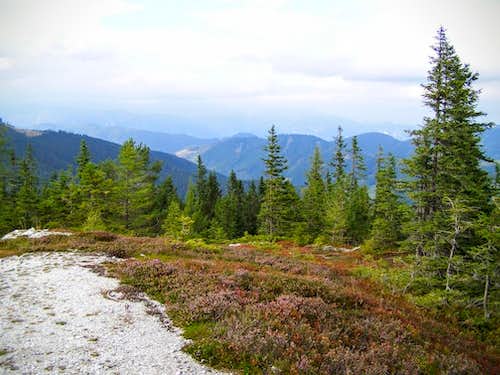 Idyllic landscape along the marked trail
As I already mentioned – our small mountain group is between the saddles Pfaffensattel and Feistritzsattel, and both can be easily accessed on good paved roads either from north or from south. The simplest approach is from to get to Semmeringpass on highway S6, and then to drive to Pfaffensattel from northern direction. Anyway, either you start your hike from Pfaffensattel or from Feistritzsattel, it makes no big difference because the single marked route of the ridge connects these two saddles. The marked route doesn’t crosses the peaks of Grosser Pfaff and the peak of Kleiner Pfaff. You can get to the these peaks on 2-2 side trails. The side trails to Grosser Pfaff are wider. The side trails to Kleiner Pfaff are narrower.

By the way the marked trail is not a simple trail: it is the “Österreichisches Weitwanderweg 02”, also called as the Central Alpic Route. This route crosses Austria between Feldkirch (Voralberg) and Hainburg (Lower-Austria), in 1270 km distance. 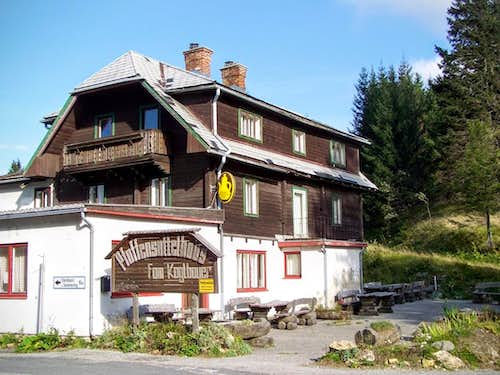 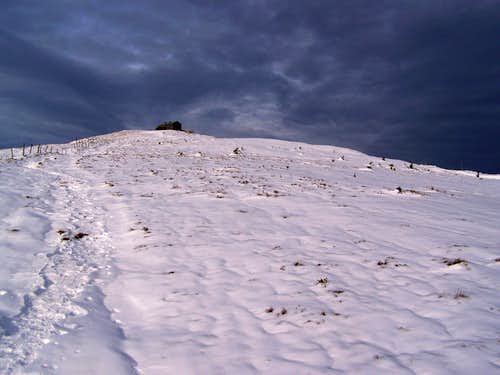 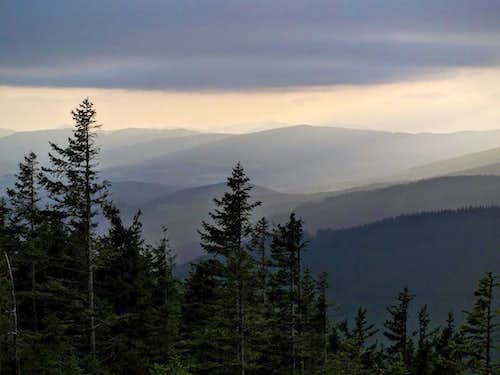 Farewell from Grosser Pfaff - with sunset view of the Fischbach Alps