On the parent (mountain) page of Grosser Widderstein a lot has been said also about its normal route. But I think that such a nice mountain deserves a bit more structured approach, so here I am describing the route on a separate page - and with some more details. Not speaking about harder climbs, Widderstein has in its summital part only one route (normal ascent), which goes by the big south gorge. Below, on its entry all approach paths join. The shortest ascent comes from Hochtannbergpass, longer ones are coming from the north, from Kleinwalsertal. 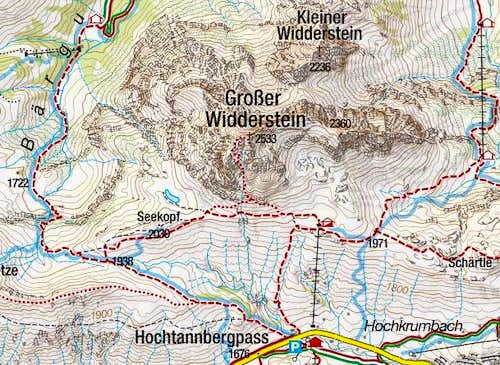 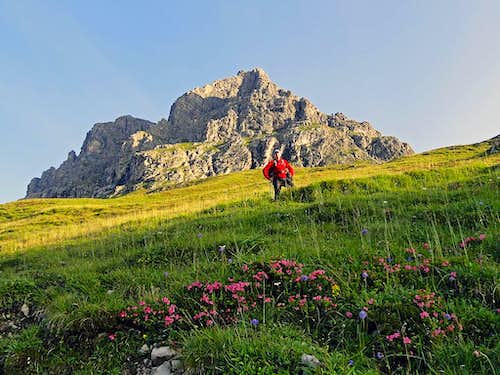 On the lower, grassy slopes of Widderstein

From the parking place on the road pass we go good 100 m by the road back towards Warth, until at a big wooden hut inscriptions direct us on a good path, which deters uphills, towards Widderstein Huette. To attract visitors it is written 45 minutes till there, but an average hiker will need for those 350 meters of altitude around one hour.

The path goes in many turns across the grassy slopes, all the time towards the north. Towards the south and east we have a nice view over the road pass and along the valley towards Warth and on the surrounding mountains.

At Widderstein Huette, 2009 m, we turn left, towards the west. A well marked path goes at first almost horizontally across the grassy southern slopes of Widderstein. Then it soon branches. The left, lower branch, continues horizontally on Hochalppass. Our path is the right one, which goes more steeply up the slope, towards our mountain. Despite ascending considerably, the path still crosses towards the left, until it reaches the mouth of the big Widderstein south gorge (some 15 minutes from the hut till here). Till there from Hochalppass also the approach path comes. The inscription warns us that the continuation of the route is more difficult.

In the beginning the feeling in the big gorge is a bit anxious and also the views up are quite scary. But the path keeps finding considerably easy passages over the rocks. You only need to be careful to set every step safely and to hold solid rocks. In the lower part the path follows the gorge bottom, but then soon starts using the left slopes (looking up). There it reaches a nice balcony with a fw big ciarns, but it's much too early to think of a rest. So we continue by a steep, rocky slope up. It is a good advice to follow the marks strictly, because they avoid as much as possible climbing over rocky steps. Instead, they use narrow ledges, going left and right. But some climbing is needed despite of that. In its middle the route approaches the bottom of the gorge again. There it goes through a narrow rocky passage, where we can find even one or two rusted, useless peggs in rocks (the only ones).

Above, the path avoids the gorge bottom again towards the left. There we already see the summit with its cross and the western summit ridge above us. The route goes in turns directly up, until it gains the summit ridge. Nice views open towards the north. 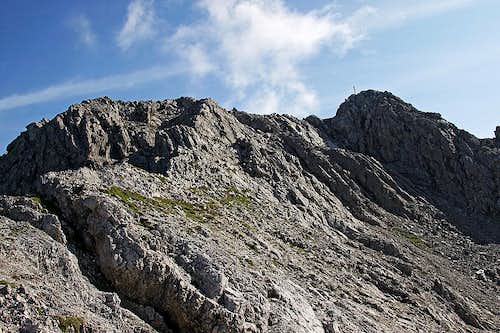 On the west ridge we turn right and continue by easy scrambling. We follow the ridge or go just a bit right below it - until we reach the highest point.

We descend by the same route till the gorge entry. From there we can continue directly (via Widderstein Huette) down to the road pass, or we can decide to do a short round tour. The latter goes towards the west on Hochalppass, and only from there down to Hochtannbergpass.