Großes Degenhorn is the fourth highest mountain of the Villgraten Group in the south of Hohe Tauern. Like its three higher neighbours Weisse Spitze (2963), Rote Spitze (2956m) and Hochgrabe it scrapes the "magical" limit of 3000m but just doesn't quite reach it. Together with Kleines Degenhorn, which is some 100m lower it forms a twin summit on the main ridge of the Villgraten Group. It stands at an important position on the Main Ridge (West) of Villgraten Group, just where the ridge to the subgroup of Hochgrabe branches off.

The mountain is best accessible from Winkeltal at the end of which you find the only mountain hut of the Group, Volkzeiner Hütte. A very nice spot on this side of the mountain is "Schrentebachboden", a large high cirque which is located high up on the eastern slopes of the Degenhorn summits. But also the other sides of the mountains offer worthwile trips.

Like all high mountains in Villgraten Group you witness picture perfect views of all the Dolomites and Hohe Tauern, just like the ones Gangolf published on the Hochgrabe page. 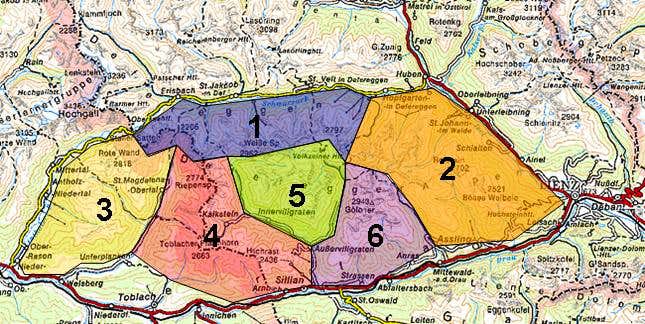 There are three trailheads for Großes Degenhorn, one at the end of Villgraten Valley at Oberstalleralm, one at the end of Winkeltal at Volkzeiner Hütte and one in the north in Derfereggental at Brunnalm above the village of St. Jakob. Use the following descriptions to get to the trailheads:

Western Approach (Oberstalleralm and Volkzeiner Hütte)
Take the Brenner / Brennero Motorway A22 from Innsbruck (north) or Verona (south). At Brixen / Bressanone turn onto SS49 into Pustertal / Val Pusteria. Turn north at Sillian into Villgraten Valley. For Oberstalleralm follow the valley to its end, for Volkzeiner Hütte turn north into Winkeltal which you also can follow to its end.

Northern Approach (Brunnalm)
Take B161, Felbertauern Road, from Kitzbühel south. After passing Felbertauern Tunnel you reach Matrei, where you can turn into Derfereggental Valley. Go to St. Jakob where you take the lift to Brunnalm.

Eastern Approach (all trailheads)
Take Motorway A2 from Klagenfurt to Villach. There turn onto A10 north which leads you to Spittal. A little north of Spittal turn west onto B100, which follows the Drau River Valley to Lienz and on into Pustertal Valley. For the southern trailheads follow the road to Sillian where you turn north. For the northern trailhead take B108 north to Huben where you turn west into Derfereggen Valley.

Southern Approach (Oberstalleralm and Volkzeiner Hütte)
Take motorway A27 from Venezia north to Belluno. At the end of the motorway take SS51 north to Cortina d'Ampezzo an on to Toblach/Dobbiaco. Here you are already in Pustertal Valley where you turn east in the direction of the Austrian - Italian border. At Sillian turn north into Villgraten Valley 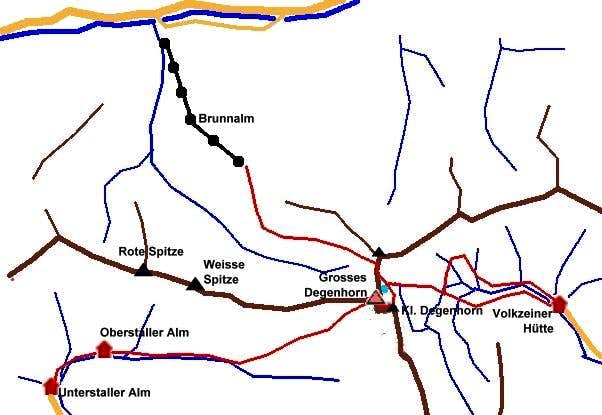 As said above there are three trailheads and three normal routes on marked trails that only require normal hiking gear if summer conditions are good (no snow):

North route:
This is the most convenient route because you can use the cablecar to Brunnalm and a chairlift Mooser Berg" that lifts you up to 2300 m:
the route crosses the slopes SW of Leppleskofel and Hochleitenspitze to gain the Villgraten main ridge at Ochsenlenke pass (2744 m). the final part is exposed. Short descent to Degenhornsee lake (2713 m) and the along the ridge via Kleines Degenhorn. Some cables help on exposed sections of the ridge
time for ascent: 3 h

East route:
Trailhead is the parking at Volkzeiner Huette (1886 m). There are two trails to Schrentebachboden, both of which are rather easy but steep since they have to scale a huge step at the end of the valley. The route to Hochgrabe branches to the left, to Degenhorn you climb the slopes in western direction passing some little lakes and finally reaching Degenhorn lake where you meet the north route.
time for ascent: 3.5 h

West route:
Trailhead is the pasture village of the Oberstalleralm (1883 m), that can be reached with private car on a macadam road, free until Unterstaller Alm (1664 m) and then with a little fee.
The trail first follows the Arntal valley up to a elevation of 2100 m. There route Nr. 19 branches off and climbs the summit on the big SW slope, at 2500 m crossing a creek.
This is the common ski route and the one I have done
time for ascent: 4 h

The normal ski route is the west route. This is a demanding trip that requires good conditions. It is a long route and not that often done because most climbers concentrate on more easy ski touring trips like Kreuzspitze, Gaishoerndl etc.

Großes Degenhorn is an destination for almost the whole year.
The hiking season runs from June to September/October - as long as there is no fresh snow. In June you surely have to cross some snow fields
Ski touring is possible until May, but probably not before March (depending on avalanche conditions)

Famous classical mountain explorer Ludwig Purtscheller wrote that you must climb Grosses Degenhorn to gain the correct overview about Villgraten Group. But of course views go much further... I can only serve with some winter shots

There is no red tape in the Villgraten Group.

The Villgraten Group is located on the south side of the Alpine Main Ridge. In general this means that the weather is better than in the north of the main ridge. In winter the avalanche danger rating often is lower than in the northern or central parts of Tyrol. On the other hand it is possible that until January there is not enough snow for tour skiing.
Weather Reports and Livecams:

Maps
Common are the maps by Kompass Verlag, which are good for the hiking trails but not very detailed if you want to judge the terrain.
Better are the official Austrian Topographical Maps 1:50000, but they are difficult to obtain. The right one would be

Books
You’ll probably not be able to find anything on the Villgraten Group in a language other than German. The book Gangolf used is

This page is a joint effort between Gangolf Haub and me (Mathias Zehring). During his vacation to East Tyrol / Carinthia in September 2004 Gangolf had taken a number of pictures of Grosses Degenhorn, which is one of the most important mountain of the Villgraten Group of Hohe Tauern. The access, accommodation, weather, maps and books info about this mountain is very similar (almost identical) to the one of Hochgrabe, which he climbed back then. I had climbed the mountain some years ago with ski. So Gangolf created the skeleton of the page (in his usual quality) which I only had to complete with route information, pictures and some minor additions.
I have to thank him very much for his great work!