This page has been here on SP since the very beginning. I think it was originally created even by Josh. A few years later, on my remark that it needed to be updated, I think Josh somehow transferred it to me, so I was never able to vote on it, but also forgot to claim ownership. Recently I reviewed some of my old mountaineering notes and decided to give this nice route a try. Please help me improve it with your contribution! 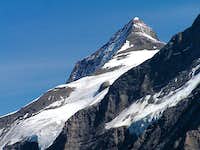 Großes Wiesbachhorn is a wonderful, mighty mountain, undoubtedly taking the second position in Grossglockner group. A few close neighbors of Grossglockner exceed it by height, but no other really self-standing mountain is dominating its neighborhood as Grosses Wiesbachhorn does. From wherever you see the glaciers of Hohe Tauern, always you notice its high silver horn, piercing the sky.

Wiesbachhorn has everything which a high mountain must have. A wall, in which alpinistic history was written, one of the most beautiful snow ridges in Hohe Tauern group, a mighty, more than 2400 m high south-eastern face, which is the highest in the Eastern Alps and nice, with glaciers covered accompanying summits in the neighborhood. The ascent by the normal route is not difficult, but also not just easy. It requires some experience, gear and good conditions and in return offers a wonderful experience. And crowds on Grosses Wiesbachhorn are far less annoying than those on Grossglockner.

The whole route from the north-west is very diverse, in magnificent surroundings. The Klamml chimney is an amusing warm-up, Kaindlgrat a true poetry in white and the summit ridge ascent a great finale. For sure one of the most beautiful tours in Hohe Tauern within its difficulty range!

Kaindlgrat is the north-west ridge of the mountain. It was first climbed on September 9th, 1867, by the famous Wiener climber Paul Grohmann, accompanied by two mountain guides from Kaprun: Anton and Peter Hetz. The nowadays famous ridge got its name only later. A gentleman A. Kaindl from Linz climbed the mountain in 1870, guided by Kederbacher and Hetz. Realizing that the route from the only hut at that time, (Rainer-Huette) was very long, he sponsored the building of a shelter, where nowadays Heinrich-Schwaiger-Haus stands. In 1875 it was proposed that the nice ridge is named by him.

You start the tour on Grosses Wiesbachhorn by Kaindlgrat in Kaprunertal, the valley which is reachable by car from the north, from the valley of Salzach. From the big parking place near Kesselfall-Alpenhaus you must take a combination of bus and cableway. Switching from bus on the cable-pulled plateau and back on bus will take you some time. So you reach the place called "Heidnische Kirche", near the big dam of Mooserboden, 2040 m. Busses and cableway of course operate only in summer, typically from mid-May till mid-October.

View Kaindlgrat in a larger map

The route brings you from 2040 m on 3570 m. So, almost without losing a meter of altitude, you gain 1530 m, which tells you that the tour can also be done in one day. But you will very likely not find yourself at Mooserboden dam very early. If you have to sleep on the mountain, then it is certainly best to do so in Heinrich-Schwaiger-Haus. That is, on the other hand, the reason why this mountain hut is always overcrowded in high season. The official difficulty rating of the route is: PD-, UIAA I, 35º. 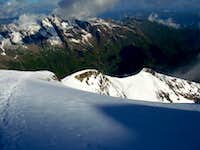 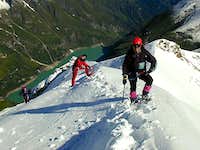 From Mooserboden To the Hut

This part of the tour hardly needs any detailed description. From the bus station at the dam, 2040 m, we first go across the big Mooserboden dam. On the other side of it, you can read the whole story of how the water from the artificial lake is being taken through the whole Grossglockner group to the plant on the other side. Very interesting! Immediately on the other side of the dam, the marked path starts ascending uphills. At first, it is comfortable and wide, higher it goes on a few places over steep and a bit unpleasant slabs. There the path is protected with cables and some additional attention is needed, especially if there is snow or even ice on the path. Later again many long and comfortable turns bring us to the hut. The overall difficulty of this section (by the Swiss Hiking Scale) is T3. Some 2 h 30 min (for a bit less than 800 m of altitude).

From the Hut on Top

A well-seen path goes first from the hut towards the east, to a steep rocky barrier. There the route enters a virtually vertical chimney/ravine which cuts the rock wall. It is called Klamml. That part of the route is well protected by pegs, hooks and cables, but it still requires some usual power (like a typical short ferrata) and in snow or ice additional attention. As we are climbing over rocks, in this part we usually still don't use crampons. After the chimney we have some 100 altitude meters or so of an unpleasant mixed terrain. It requires even more careful ascending (and later descending), because mostly there are no protection devices. The slope is northwards oriented, so in the morning always in shadow. Also in summer (let alone in winter conditions) it can be icy. Even if there's only snow, the use of crampons and ice pick is advised, because every slip there could be dangerous or even fatal. Just before reaching Unterer Fochezkopf the rocks get even a bit more steep and the last steel cables help us get out there.

On Unterer Fochezkopf, 3022 m, we step around the summit rocks and get pleasantly surprised. We set our foot on a beautiful snow ridge, running in a nice line to the very top of Grosses Wiesbachhorn. At first it is broad, even plateau-like and there we even see a few crevasses which are easily avoided. Then the ridge gets more narrow but we comfortably reach the next elevation in it - Oberer Fochezkopf, 3159 m. From there we continue by the more and more panoramic Kaindlgrat on a small plateau like Weilinger Scharte, 3265 m. There some other routes join from the south and southwest.

The summit horn still requires to climb some good 300 m of elevation. It continues in the form of a ridge and gets more and more steep. In summer we climb there usually by a mixed terrain. There's more and more rocks, in later summer months the ridge can be all rocky. If there is snow, it can be due to big altitude icy. The up to 35º steep ridge requires a lot of care and will usually take us almost 1 hour.

Unless being on a longer tour across Grossglockner group, we descend by the same route. As usually, descending requires more care than ascending.

Ice pick and crampons are mandatory, rope in normal conditions is not. When the slopes are icy or covered with hard snow, also a rope can be useful. Consider quite high altitude, so have some warm clothes also.

Heinrich-Schwaiger Haus, 2802 m. It has 57 beds and is open from end of June till end of September.

When To Do the Tour?

The best season is normally early summer, when the white poetry of Kaindl ridge is still not melted into a boring grey rock ridge. Otherwise the whole summer, until the hut is opened. A winter ascent can be much more difficult (see trip reports here on SP).