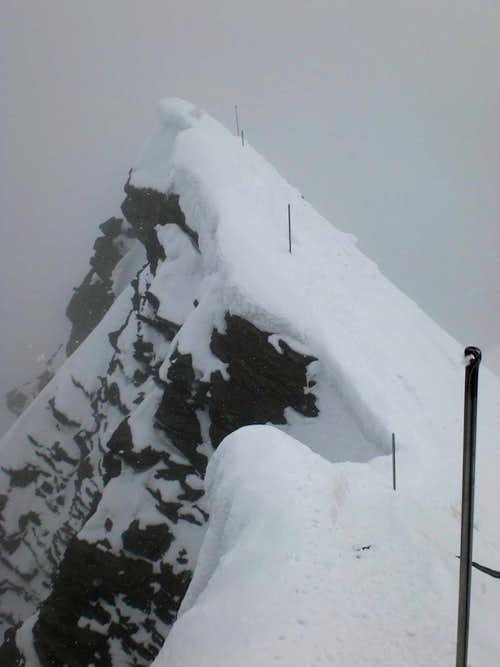 From the base of the Hoffmannkees glacier, we ascended to the south directly underneath the ridge line and then back in a westerly direction to the Erzherzog-Johann-Huette. This route in times past had to been the most common ascent but it has become more difficult in recent years because of shrinking glaciers and dangerous stonefalls. As we continued up the firm snow, the hut was always in view which makes for improved climbing to the mind. In the North Cascades, the setup time to reach any point of climbing can be at a day or more for most peaks, but it was very apparent over the hundreds of years of climbing in the Alps that the roads were further and deeper in the mountains than what we were used to. To have a line of sight to your destination without the need to tromp through trees, over logs, carrying tents, sleeping bags, cooking year, and food. Good thing we didn't bring a tent even though we had the other gear. We arrived at the Erzherzog-Johann-Huette at 3454 meters or 11,332 feet slightly before noon which is also the highest hut in Austria. As we walked into the hut I was blown away in my first impression of what climbing is like in the European Alps. It included every amenity you needed to survive including a gear room, room to dry out your boots including slippers, a full staffed kitchen, kegs of beer, beds with clean sheets, and crystal clean toilets. We dropped our gear and took the first rest of the day in the dining hall and decided to summit Großglockner in the afternoon instead of waiting for a midnight run in the morning.

The Großglockner is the "king" of the eastern half of the alps with a prominence, the elevation over the deepest pass that separates it from the next higher mountain, only second to Mont Blanc. The Grossglockner and surrounded by the Glockner Group that is a central part of the Hohe Tauern Range. As noted, we decided to make a run for the summit in the afternoon giving us the ability to leave first thing in the morning. We left around 2 pm from a point only 1200 feet from where we stood on a steep ridge to summit hidden in the clouds above; we followed the zigzagged boot path to gain access on the ridge and a series of fixed anchor points offering protection to the continuous drop on both sides. There were a handful of other climbing groups heading to the summit at the same time but the real challenge was those which were coming down. We you are on a ridge with the exposure like this; it takes extreme care to insure you’re always anchored to the mountain while allowing the ropes to pass along. As we continue to climb we realized we were well on our way to summiting the first mountain of this grand adventure, and as we continued to climb I could see the summit close above and felted the excitement of reaching the top. As I crested what I thought was the summit, I quickly realized there was more to this mountain...