The south side of Guadalupe Rock 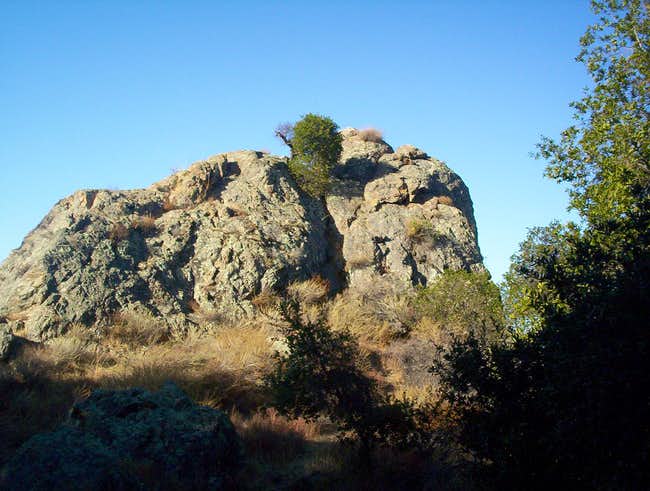 Guadalupe Rock is, unfortunatley, on closed property south of Almaden Quicksilver County Park. Guadalupe Rock is mainly a class 3 scramble on the south side. The north side offers more difficult routes. From the top, there is a great view of many of the SF Bay Area peaks including: Mt Umunhum, Mt Isabel, El Sombroso, Mt Tamalpais, and Mt Diablo. On a clear day even San Fransisco is visible.


Panorama from the summit of Guadalupe Rock.

All approaches to Guadalupe Rock should start at Guadalupe Reservior. To get here, turn onto Hicks Road from Camden Ave. in San Jose. Travel on Hicks for a few miles until you come to Guadalupe Reservior on the left side of the road. There is parking about 50 yards past the dam on the right side of the road. Guadalupe Rock is visible from the dam, so it might be a good idea to see where it is located and get your bearings. After that, head due south from the dam, where small trail heads up the steep terrain and through a small fence. From here, there are a few trails that branch off. My advice is to stay on what looks like the main trail that leads in the general direction of Guadalupe Rock. We followed a couple trails up and had very little problem finding the rock. The main trail we followed climbed through a steep, oak covered slope, which offered quick glimpses of the north side. For the most part, the trail heads south, until the last bit, which heads north to the base of the rock. From Hicks Road to Guadalupe Rock should take about 10-15 minutes. There are bolts on top to set up top-ropes on the north and east faces.

Guadalupe Rock is on CLOSED PROPERTY . Going up there is illegal. Guadalupe Rock and the surrounding area may eventually be opened to the public but not currently. Despite this there is evidence of plenty of people going up there so if you want to go it is unlikely that you will be deterred. Just be discreet.

Mild winters and hot summers at Guadalupe Rock. Some water is about all you need since the getting up to the rock takes about 15 minutes and the actual climbing of the rock takes 28 seconds. Going up on a clear day is strongly recommended because it's a great view in pretty much every direction from the top.

There is no camping on Guadalupe Rock.

There are no specific places to get the weather information because Guadalupe Rock is private property but you can check the weather in surrounding areas such as Los Gatos or San Jose.