The Cipriano Hills are a range within the Organ Pipe Cactus National Monument in southern Arizona. The range is volcanic, with broad plateau-tops and uniform hills, all covered nearly every square inch by blackened basalt boulders and stones. The highest point is marked by the USGS Benchmark "Guadu", which is presumably short for "Guadalupe". The hike is fairly easy, if you don't mind boulder-hopping the entire way.

The main attraction is the Puerto Blanco Road, a loop that runs almost 40 miles (going by park literature and assuming you begin and end at the visitor's center) in a counter-clockwise loop. The road had been closed between 2002 through 2014. In 2002, Park Ranger Kris Eggle was shot and killed by armed drug smugglers coming up from Mexico, which prompted closure of the road for many years until security in the area could be beefed up. The road re-opened in 2014, and is a decent desert track that most high clearance vehicles can manage. You will drive this road to get close to the peak.

Chances are good you'll be here on your own if you come this far to climb the peak. Use common sense and usual precautions. It's not improbable that you may encounter some crossers or evidence of them. But don't let this scare you away. The likelihood of a violent encounter is low. However, if you do see crossers or smugglers, don't engage them. Pay extra attention out here. You won't be seeing lots of park ranger vehicles or security people. Much of the responsibility for your own safety falls on you.

Drive to Organ Pipe Cactus National Monument's main entrance, which is 4 miles north of the Mexican border along state route AZ-85. From Phoenix, figure about 175 miles, from Tucson, about 150 miles. Drive in to the visitor's center and pay your fees. They are open 8 a.m. to 5 p.m.  Exit the lot, and drive a few feet to the Y-split in the road. The Twin Pines Campground goes left, the start of the Puerto Blanco Road goes right. Zero your odometer here.

Drive about 16 miles along Puerto Blanco Road, at which point you'll be east of the Cipriano Hills. Along the way, note the following: The road is gravel and partly paved for the first 4.8 miles, coming to a day-use parking area east of Pinkley Peak. Afterwards, the road narrows and gets a little rough, and is one-way only. Soon, the road bends west and goes in and out of many arroyos and traversing below the numerous hills. You'll probably average about 25 miles per hour on the first segment before Pinkley Peak, and between 10-15 m.p.h. thereafter. High clearance is strongly advised, but 4-wheel drive is not necessary. Pay attention to rocks in the road and ruts. No need to rush this drive. Expect about an hour to get close to the Cipriano Hills.

Once done with your hike, continue southbound now along Puerto Blanco Road. There are a few pullouts along the way, e.g. Bonita Well, and a few old mine sites. After about 21 miles total, the road comes to a T-junction. Stay left, and for a short ways, the road runs within an arroyo and can be sandy. A couple miles later, it ascends out of the arroyo to another junction. You'd want to stay left, but a right turn leads to the Quitobaquito Springs, less than a mile away. This is a large spring-fed pond in the middle of the desert, with cottonwoods, reeds and ducks. The border fence with Mexico is just a few dozen feet to the south.

To return to the paved highway, backtrack east to Puerto Blanco Road and stay on it for another 12 miles roughly. The road here runs along the border with Mexico, at times to within feet of the fence. A major Mexican highway, Federal Route-2, lies immediately on the other side. It's an odd juxtaposition, to be driving on a desert track, then see a big bus or truck zoom by on the highway a hundred feet to the south.

Puerto Blanco Road finally meets back with AZ-85, less than a mile north of the border. My odometer read 36.5 miles. If you need drinks, there's a basic general store and gas station in Lukeville.

I went up the south ridge, but this was not my preferred choice at first. However, it worked well with no impediments. I believe ascending the gully to the saddle north of the peak, then slopes up to the peak, would work well.

From the road, hike about a mile west across the desert plain, crossing into and out of a number of arroyos along the way, some that may require a little work to get past. Aim for the ridge of your choice, then just start uphill. I found the south ridge to be steep, but manageable. The slopes are covered in basalt boulders which are mostly solid. Cactus is thick, especially cholla. Once above the steepest slopes, hike by sight up to the summit, finding routes through the boulders.

One-way mileage is about two miles, with about 1,200 feet of gain. It took me 90 minutes to get up, about 75 minutes to descend. Hiking poles or a staff are encouraged.

As usual, step carefully. The rocks may move or there may be a snake waiting for you. Cover up completely, and expect to get scratched and poked a few times by the plants. Hopefully, this will be all you will endure. 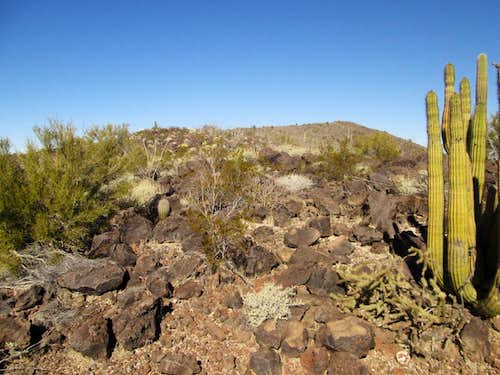 Summit is in view once on top the summit ridge

Although not technically "red tape", beware of smugglers and other border crossers in this area. You will probably see discarded water bottles and clothing. Be aware of your surroundings and use extra diligence out here. 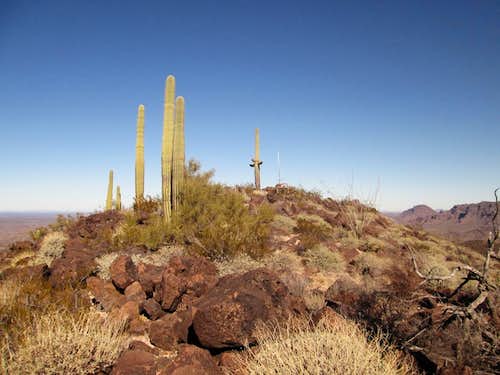 The temperatures are pleasant from about mid-November through early March. The summer heat is extreme, and hiking out here during the hot months would not be wise. The warm weather starts in March and lingers into November, but you may get lucky if a cold spell moves through, which would allow for October or April hikes, too.

The Twin Peaks Campground is the main campground within Organ Pipe Cactus National Monument, and charges $16 per night (as of 2016) for a tent space.

There is limited back-country camping, and none allowed along Puerto Blanco Road.

The Quitobaquito Springs are a natural set of seeps that have formed ponds in this harsh desert. It's a short drive off the main road and highly recommended. 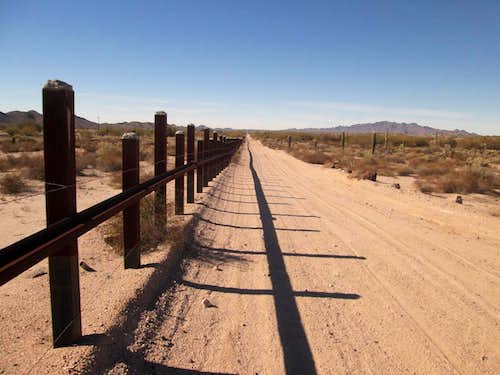 Mexico to the left, USA to the right.