The Hăşmaş Mountains (pronounced hash-mash) or Curmăturii Mts (Oancea, D. ș. a. – Geografia României, vol. III, ed. Academiei Republicii Socialiste România, București, 1987) are situated in the central part of the Eastern Carpathians. They cover an area of nearly 500 sq. km. On the north they are bounded by the Munţii Bistriţei/Besztercei-havasok. The eastern boundary of the Hăşmaş is delimited by two mountain groups: the Ceahlău/Csalhó in the north and the Munţii Tarcău/Tarkő-hegység in the south. To the south the Hăşmaş Mountains stretch as far as the Munţii Ciuc/Csíki-havasok. The western boundary follows the great River Olt, which has its source in the Hăşmaş Mountains and separates them from the Harghita/Hargita to the southwest and the Munţii Giurgeu/Gyergyói-havasok to the west. Although the area lies in the heart of Romania, it is inhabited (especially its western part) primarily by Hungarian-speaking Szeklers, whose ancestors settled here about a thousand years ago. For this reason, as far as the geographical names are concerned, I will try to give both Romanian and Hungarian versions.

The foundation of the Hăşmaş Mountains is formed of metamorphic rocks from the Precambrian era, which generate rounded crests elevated up to 1500 m. However, it is not these ancient crystalline schists but Mesozoic limestones and dolomites covering the older rocks that make for the characteristic scenery of the mountains. The southern, highest chunk of the main ridge of the mountains (which runs from NNW to SSE) looks imposing when seen from the west, from the valley of the River Olt: A spectacular wall of white cliffs resembling the cliffs of the Piatra Craiului.

In some places where the main ridge has been heavily eroded, islands of the most resistant rock form fabulous towers and spires, such as Piatra Singuratică/Egyes-kő. In contrast, the eastern slopes of the main ridge there are rather gentle and partly look like a plateau. These areas covered by mountain pastures such as Poiana Alba/Fehér-mező (White Glade) give a specific note to the landscape of the Hăşmaş. In the north, the main ridge has more symmetrical sides and transitions to a chain of hills with fairly regular silhouettes.

The most outstanding rock towers as well as a magnificent canyon known as the Bicaz/Békás Gorge (considered the grandest canyon in Romania) are to be found in the northeastern part of the mountains, where karst landscapes with caves, dolines, sinkholes, defiles and waterfalls abound. This part of the Hăşmaş lets the hiker marvel at the most picturesque karst scenery in all of the Eastern Carpathians. A fun hiking route running along the rim of the cliff provides superb views of the twisting road 300m below, which crosses the Bicaz gorges, thus connecting Transylvania with Moldavia. One of the curiosities is Lacul Roşu/Gyilkos-tó (Red Lake) - Romania’s largest naturally dammed mountain lake, which came into being in 1837 as a result of a huge landslide. The tips of the broken trunks of spruce trees can still be seen projecting above the surface of the lake.

The table below lists the highest summits and the most conspicuous crags.

The natural frame of the Hăşmaş Mountains with its varied geologic and geomorphologic elements, its microclimatic conditions determined by the exposure of slopes, enables the existence of rich and diverse flora and fauna. There are almost 1150 superior plant species, many of them of great scientific importance. Pure spruce forest dominates the landscape of the Hăşmaş. The forest is home to the big Carpathian mammals, such as brown bears, wolves, lynxes, red deer. In the 1970s the chamois was introduced. 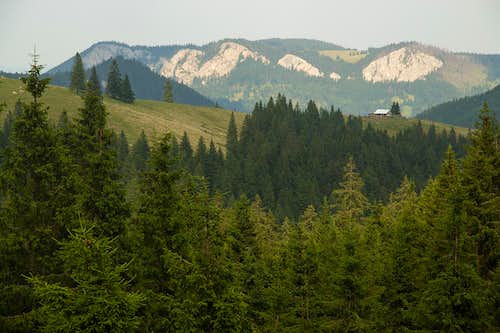 Wild camping in the Hăşmaş Mountains is permitted only outside the territory of Bicaz Gorges - Hăşmaş Mountains National Park. Camping on the park territory is allowed only in designated places. In 2010 a new wooden refuge was built at Poiana Alba (1500m). It is situated on the red stripe trail (on the main ridge) and can sleep about 8 hikers. 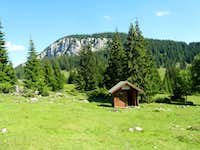 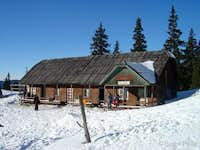 Since 2011 the newly restored Piatra Singuratică Hut (Cabana Piatra Singuratică/Egyeskő menedékház), situated at 1504m at the foot of the monumental rock towers, likewise named,  offers comfortable accomodation (30 beds, heated sleeping rooms and a separate dinig room). The hut is now also equipped with solar collectors to prepare warm water. A bed costs 15 RON per night. You can pitch your tent by the hut too. Unofficial webpage Also, tiny twin-bedded chalets are situated near the "Small Zigzag" (Serpentina Mică/Kis-szerpentin - km 29) in the very heart of the Bicaz Canyon (Vila Marta).

Weather forecast for the mountains on freemeteo.ro

The national Salvamont (Romanian mountain rescue) dispatcher's phone number is 0-SALVAMONT (0725-826668) Salvamont Harghita Salvamont has no team inside the mountains. The nearest Salvamont station is located at Red Lake. 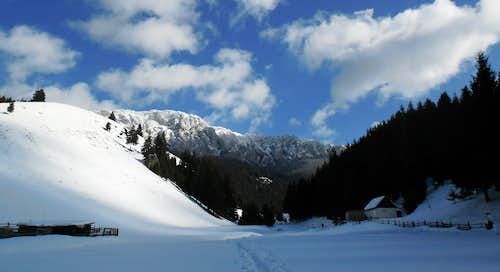 Special thanks to yatsek for co-editing the overview and proofreading.

Thanks, I´ve submitted it...