Haigutum Middle is situated south of the Hispar Glacier in the Hispar Muztagh, a sub-range of the western Karakoram.

The Hispar Glacier is 50km long, running in a straight line east to west, with an array of fine peaks on either side. The highest of these are on the north side, namely Distaghil Sar (7885m), Khunyang Chhish (7852m), Kanjut Sar (7760m) and Trivor (7728m). Each of these mountains has had very few ascents.

Along the south side is a line of peaks known as the Bal Chhish Range. Although small by Karakoram standards, they are attractively positioned right above the Hispar Glacier. At the western end, Makrong Chhish (6607m) is the highest of them. This peak is still unclimbed after a number of attempts. 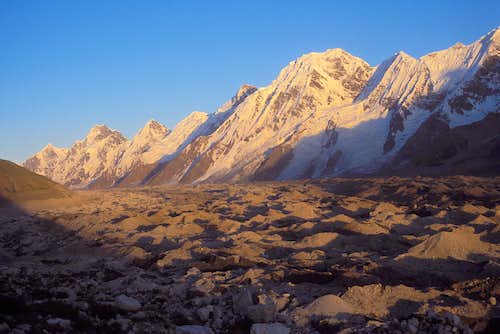 Evening light on the Hispar Glacier and the Bal Chhish peaks

Gilgit can also be reached by bus along the Karakoram Highway from Pir Wadhai bus station in Rawalpindi, not far from Islamabad. Buses leave in the afternoon and take about 18 hours, but can be delayed if the road is washed out or blocked by landslides.

From Gilgit get a Hiace van up the Karakoram Highway to Karimabad or Aliabad in the Hunza Valley (3 hours). Jeeps to Hispar village can only be hired in Nagar. Public jeeps go from Aliabad to Nagar and leave when they are full. Otherwise hire your own jeep to Nagar in Karimabad, or in Gilgit. From Nagar hire another jeep to Hispar village (2 hours) where the trek to base camp starts. However the Hispar road is frequently blocked by landslides and the trek may have to start at Huru, which is half way to Hispar village.

Beyond Karimabad, the Karakoram Highway continues up the Hunza Valley and crosses the Khunjerab Pass into China.

Hispar porters
Trekking to Base Camp
Hire porters in Hispar village. Pay will be per stage, with a fixed number of stages on established trekking routes as agreed by tradition. Stages represent a day’s walk, but often more than one stage is completed in a day. Usually half pay per stage will be paid for the un-laden return journey from base camp. Rates per stage are governed by the Ministry of Tourism but are typically open to negotiation. The Hisparis are known to strike a hard bargain.

The trek to Haigutum base camp takes in some impressive and beautiful Karakoram scenery and forms part of the classic Biafo-Snow Lake-Hispar trek. The walking is mainly in ablation valleys along the northern edge of the Hispar Glacier. There are good campsites on pastures. The main difficulty is in crossing the Kunyang, Pumari Chhish and Yutmaru (Jutmo) Glaciers along the way. Your porters will know the way down onto, across and off the glaciers which will vary from year to year.

After crossing the Yutmaru Glacier there are several good grassy places for base camp. I stayed on the last pasture before the Khani Basa Glacier which was a lovely spot with clear water.

Reaching Haigutum Middle will require a two to three hour crossing of the Hispar Glacier. The walking is on loose rock or ice, with streams to be crossed and tricky route finding. It would be possible to have base camp on the south side of the glacier below the mountain, but there are no pastures and it would be on ice.

On January 4 2010 a massive landslide occurred 14 km upstream from Karimabad at Attabad village killing twenty people. The flow of the Hunza River was blocked for five months creating a lake 21 km long and 100m deep known as Attabad Lake. 6,000 people were displaced from inundated villages and 19 km of the Karakoram Highway were destroyed.

A major flood downstream was feared as the water level approached the top of the dam. This did not happen as water began flowing over the dam in June 2010. In 2012 the spillway was blasted twice and the water level of the lake was reduced by ten metres.

The Karakoram Highway over the Kunjerab Pass to China remained open and boats took people across the lake. In 2016 the Chinese finished building a road past the lake.

Snow at Base Camp
Campsites
There is a camp site in Hispar village. The best campsites on the trek to Base Camp are at Bitanmal, Dachigan and just west of the Yutmaru Glacier. Base camp could be at a place called Haghura Shanga Liahung which has slightly silty water or preferably slightly further on just before the Khani Basa Glacier where I was.

Accomodation
This can be cheap in Pakistan. In Gilgit the New Madina Guesthouse is recommended. Karimabad is a good place to relax before or after climbing. The cheap guesthouses around Zero Point are a good place to stay. There is no guest house in Hispar village.

Peaks below 6500m do not require a permit or a liaison officer in Pakistan. A guide as provided by an agent could help with porter negotiations which can be difficult in Hispar village.

Good agents I have used are:
Adventure Tours Pakistan
Himalaya Trek and Tours

Haigutum Middle route
From a bivouac on the Hispar Glacier at 4300m, I climbed a more direct line on the north face to the left of the line climbed by Harrison and myself in 2006 on our ascent of Haigutum East. From a bivi at 5100m, I took a line to the right of the 2006 line to join the ridge connecting Haigutum East from Haigutum Middle at 5550m. I followed the east ridge of Haigutum Middle in stormy conditions and deep snow. Fifty meters from the summit I triggered an avalanche and fell more than 150 meters down the south Kero Lungma side of the mountain. I was not badly injured, but I had lost my glasses. It was getting dark and I descended back to the bivi site with some difficulty wearing sun glasses. The next day I descended the rest of the mountain in continuing bad weather and the following day I returned to base camp.
Although I fell off the mountain, in good conditions this line would give a good route on the mountain at alpine AD.

On Haigutum Middle
When to Climb
The climbing season is from June to mid September. The monsoon from the Bay of Bengal moves westward and reaches Pakistan in late June through to September. The Karakoram is in the Himalayan rain shadow which limits the effect of the monsoon. However when the monsoon breaks down country it’s usually stormy in the mountains. The weather can change very quickly with snow fall higher up or heavy rain at lower altitudes. Climbing in the Karakoram requires considerable patience. There can be extended spells of good weather; the difficulty thing is predicting when they will happen.

The Karakoram summer is hot. Mid summer temperatures in Gilgit at 1494m are around 40 degrees C dropping 6.2 degrees for each 1000 metres. It can be hot even at altitude in the full glare of the sun. At lower altitudes around 5000m there is often not a good freeze and alpine starts are necessary. Avalanches and rockfall are common particularly in gullies and on faces.

Websites
www.climbmagazine.com for Mountain Info, a record of world mountaineering.
www.americanalpineclub.org for online American Alpine Journal expedition reports.
www.alpine-club.org.uk for the Himalayan Index, a useful starting point to determine what has been climbed on peaks 6000m and above.
http://blankonthemap.free.fr/default.htm is a website in French and English devoted to the mountains of Northern Kashmir i.e. the Karakoram, Nanga Parbat, Hindu Kush and Hindu Raj.