Half of Half Dome
California, United States, North America

Half of Half Dome 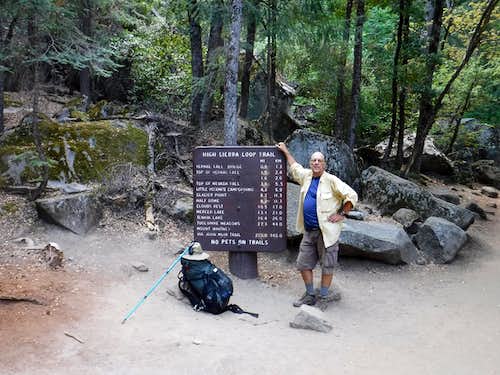 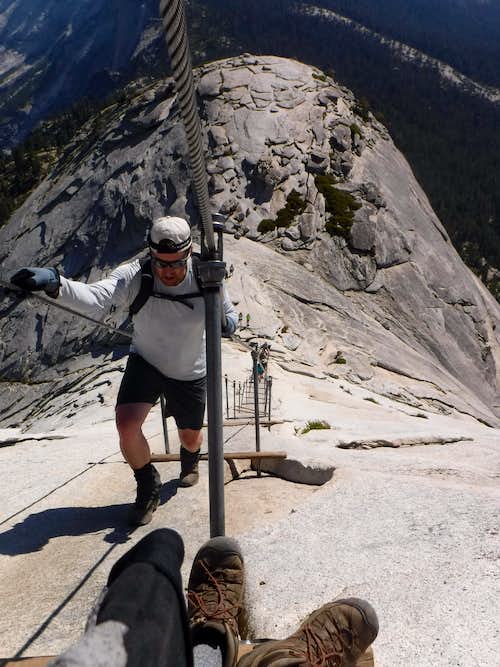 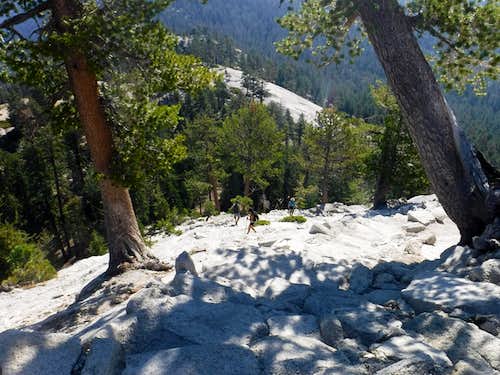 My whole reason for returning to Yosemite was to reach Clouds Rest. On a cold February day I looked at the National Park website to see what was required. I filled out the form and it asked if I wanted a Half Dome permit. Sure, why not. So I got all the permits I wanted. I would start at Tenaya Lake (Sunrise Trail Head and head out from there to Clouds Rest, the object of my three day hike. The first surprise was how hot it was, about 103 in the Valley. I had been to Yosemite several times before, in July and August but I didn't remember it being that hot. The heat also meant a lack of water in streams. For me, it was a tough hike to Clouds Rest. I live at sea level, in the southeast U.S. where it is both hot and humid, as I sit here writing this in early June, it is 10:30 am, 90 degrees and about 80 or more humidity, so I know what "hot"is.  Ten months before I left for Yosemite I had broken my leg in a vehicle accident, I sit here today with a steel plate and 9 screws in my leg, so this too made it a long hike to Clouds Rest. I had hoped to camp on Clouds Rest but I was down to less than a liter of water. So on I marched going down the trail on the opposite side of the peak. It pained me to pass a lot of nice camp spots but on I went to the confluence with the John Muir Trail and Sunrise Creek and there I camped. I was able to contact my wife by phone and told her the 10.5 miles and the heat had done me in, tomorrow I would sleep in and then hike out to the valley.

At 5 am I sat up awake, the thought "go climb half dome" was the first thing that flashed in my half awake brain. I laughed at myself and said "go back to sleep". The thought nagged until I was awake and packed for the hike. At this point I was only 2.5 miles from the top of Half Dome. I won't get into details of the rest of the climb up Half Dome but leave you some KEY POINTS I found missing on other reports:

Reaching the sub-dome is where the real exposure you will experience on the cables begins. Up to there it has been a HIKE

Don't take the sub-dome lightly, its a good hike /rock face scramble, exposed, no cables, no railings.(I really like this part, though)

I had my own gloves for the cables, bicycling gloves with padded palms, they really worked great, highly recommended.

I started up the cables and as it got steeper my feet began to slide. There was a layer of fine sand particles covering the smooth rock, it got to be as if I were on ice. No footing.

I was not clipped in as some were, something to think about. I tried different angles of foot placement, shifting my stance, none helped improve my traction. Some people had brought rock climbing shoes and one guy was barefoot (think he was the one that said "don't eat the mushrooms on top")

With such poor footing I was forced to basically pull myself by my arms. This was especially tiring. I continued to climb til muscle failure in my left arm. This is not a good thing when you are half way up half dome.

In other reports I have seen people have had the same experience and others have not. I believe rain showers will wash away the fine sand, leaving a smooth grippable surface, if it has not rained and was dry for a extended period like it was when I was there, then the sand will be there to deal with. Just my thoughts

I continued on until once again my arm muscles gave out. I guess I was about half way up Half Dome, I started down and found that too takes arm muscle strength. So I stopped and sat down for a rest. Returned to camp and hiked out next day. It was a GREAT trip!

In my hotel room back in the Bay Area I took a good look at my boots. They were pretty much smooth on the bottom, another reason I had such bad footing. I really should of looked closer at them before the hike. (but don't want to start with a new pair).

Of course after it is all over you start thinking about what you should of done, then the regrets seep it. Nope, it was a great three day hike and after it was over I kept asking myself "How did I do this?" My leg at the time was much weaker than I realized but on I went hiking down to the Valley next day. I was energized! At no time did I have and ahe or pain, how can that be? The mountains really do great things!

View Half of Half Dome Image Gallery - 1 Images