The ultimate "Tour de Holy Cross", the Halo Ridge circles the entire cirque above the Bowl of Tears and offers some of the best view of Cross Couloir you can find. The long ridge traverse also collects the summits of two additional peaks, PT 13248 and PT 13831 - which is the summit of Holy Cross Ridge and is one of Colorado's 100 highest peaks. Most people who climb this route descent the North Ridge. This route is also used in reverse as a descent of the North Ridge or one of the couloir routes. If you are camped in East Cross Creek, however, you will not want to descend this route as you will be far from camp.

Stats are for an ascent of Halo Ridge with a descent of the North Ridge:
13 miles round trip with 5420' of elevation gain.

The Fall Creek Trail starts to the left side of the parking area near the entrance for the campground and is well signed. This is NOT the Halfmoon Trail which is used for the standard route! Cross Notch Mountain Creek on a log bridge and turn right (south) up the excellent Fall Creek Trail. The trail is mostly gentle with a few short steeper bursts along the way. Continue through the forest to a wash-out area about a mile and a quarter in. Just pass this you will reach a stream crossing at approximately 11,080'. This stream can be high early in the season, but there are plenty of good rocks to use for the crossing. Past this you will get a glimpse of the notch in Notch Mountain at a talus clearing. The trail can be a little muddy after this point before steepening, and then dropping slightly around some large rocks. There is a small switchback at a stream and the trail crosses this small stream above the switchback. At about the 2 1/4 mile mark there is a small clearing and the signed junction with the Notch Mountain Trail. Take a right here and begin to ascend the Notch Mountain Trail back to the north and west. 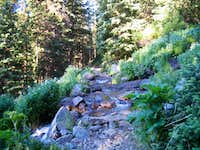 There are two small stream crossings as the trail switchbacks through some trees to reach a beautiful meadow near 11,600'. The final stream crosses the trail at some willows near the base of this meadow. This is your last chance to fill up a water bottle until well into your descent. Begin ascending the meadow through a series of switchbacks that cross in and out of some trees to the left (south). At the top of the meadow much of the remaining route to the Notch Mountain Shelter is visible. Cross a tundra and talus area to the base of the steepening talus slopes near 12,400. There are in excess of 30 switchbacks up this talus slope as it gains over 600' in a mile. This image looks back down at the start of this slope from about halfway up it, and this one looks up to give you a general idea of the terrain ahead. 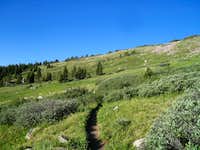 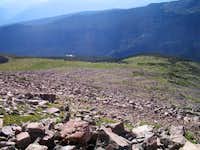 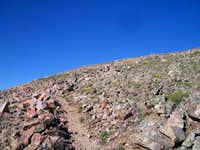 There are great views of the Gore Range, as well as Mounts Elbert and Massive from these slopes. The occasional glimpse of the namesake notch on Notch Mountain reveals your progress through this seemingly endless sea of switchbacks. Finally turn left at a large cairn and follow the trail to two large cairns just below the Notch Mountain Shelter which mark the end of the trail. You are now at 13,077' and approximately 5 miles from the trailhead! The views of the Cross Couloir from here are famous, and pilgrimages to this point to view it have occurred ever since the cross was first photographed. There is still plenty of climbing to do, and the summit is over 2 miles away. 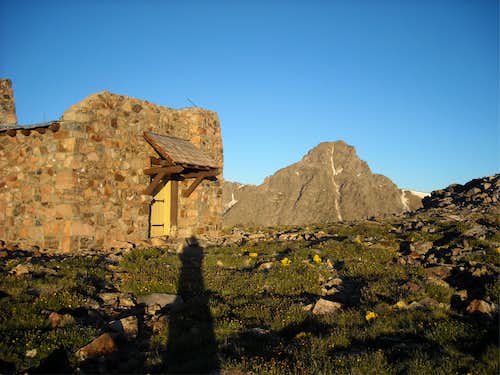 Notch Mountain Shelter and Mount of The Holy Cross by csmcgranahan

This is the start of the Halo Ridge, which circles around the Bowl of Tears below to reach the summit of Mount of the Holy Cross. There are two ranked thirteeners and an additional unranked one to cross en route. Check the weather and your conditioning before continuing on, there are no safe escape routes between you and the Bowl of Tears. Cliff bands and loose rock are all that is below, but the ridge crest is enjoyable class 2 talus.

Your first obstacle is the unnamed PT 13248, a ranked thirteener. Hike around the south of the Notch Mountain Shelter on grass and large talus boulders. Stay on or just right (west) of the ridge crest through this section. There is a large population of mountain spiders throughout this route, and this will be your first encounter with them. Due to the size of the boulders you may opt to talus hop on top of the boulders to avoid the webs. The talus steepens just below the summit, but is not difficult. From here you can see your next objective, unranked PT 13373. Descend southwest on grass and talus slopes towards the 12,940 saddle with PT 13373. This saddle is the lowest point on Halo Ridge, you will not drop below 13,000' again for several hours!

Just above this saddle there are two small gendarmes to cross, it works best to stay on, or just to the left (east) here. From the second gendarme the steepening slopes of PT 13373 become evident. Cross the saddle, and begin the ascent of these steep blocks. The rock is mostly stable, but there are a few loose ones. Climb close to, but left of, the ridge crest through this section. Due to the mountain spiders you may find yourself scrambling on top of the larger blocks, due to this steep scrambling and occasional loose rocks this is considered the route's crux. This image shows a close up of the typical rock conditions through this section. Just below the summit of PT 13373 the slopes relent and the route turns due west. You get great views of the Teardrop Couloir from here if it is in condition. 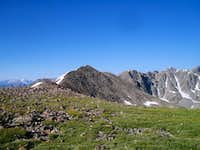 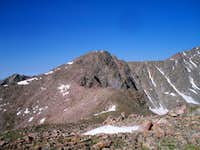 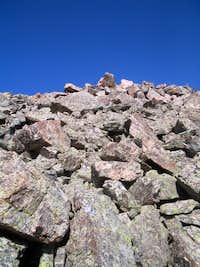 The next section of the ridge offers an enjoyable reprieve from the talus. Descend about 120' to a large flat grassy area between PT 13373 and the next summit, PT 13831. PT 13831 is the highest point of Holy Cross Ridge and is one of Colorado's 100 highest peaks. The grass catwalk narrows to about 6' wide and offers views down to the Bowl of Tears (right) and Tuhare Lakes (left). The plateau widens and turns to talus after the catwalk. Cross the talus and begin your ascent up PT 13831. If you do need to bail from the ridge, there is an opportunity to so here to Tuhare Lakes on your left, this image shows the route, there are some cliff bands and it could be tricky to see the best route from above. If the weather is good, however, its best to keep going and start your ascent of PT 13831. 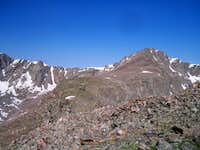 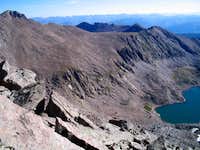 Initially you will climb a moderate talus face to the left (south) of the ridge crest. This slope will take you to the first of three false summits along the way. You are now on the ridge crest, climb the crest past to the next false summit, and to a third false summit. Descend to a notch that marks the top of a couloir on the north face of PT 13831. The snow here lingers late into July, beware of the cornice to your right when crossing this slope. You can look back from this summit and see the majority of the route, as well as the remaining route to the summit of Mount of the Holy Cross. 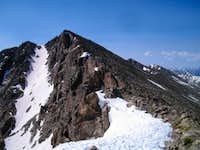 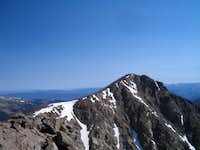 Descend along the ridge crest to the north-northwest to reach the 13,500' saddle with Mount of the Holy Cross. Bypass any of the more difficult rocky sections on the left (west) side of the ridge crest. From the saddle, begin to climb north-northeast up gentle talus slopes to a 13,650' talus bench. This bench is at the top of the Teardrop Couloir, and usually has some lingering patches of snow early in the season. Cross or traverse around the snow and continue northeast up moderate talus towards the summit. The climbing is a consistent pitch here, and it abruptly rounds off just below the summit. The summit is directly in front of you.

This is a long hike that spends several miles above treeline, the first "essential gear" is good weather as there are limited bail out points that take you far from your car. Strong legs, iron lungs, and strong sense of route finding don't hurt either, but aside from that the route is non-technical and does not require any special equipment.

You will need to carry plenty of water, the last water source is at a small stream near treeline, well below Notch Mountain Shelter. You may find some snow patches you could melt above treeline, but that is the last water until you cross East Cross Creek, which will be several hours away.

You can NOT stay in Notch Mountain Shelter overnight effective 2013. This is a change in previous management policy enacted by the US Forest Service. It is still open for day use, but not camping.

You can do the route completely from the Halfmoon Trailhead as well, I don't have the stats on that route, but its comparable in mileage and elevation gain. From Halfmoon Pass leave the trail and head up talus to the 13,237' summit of Notch Mountain, and quite possibly the single best view of the Cross Couloir that exists. Descend south through the notch and up the other side. The notch requires class 3 scrambling and careful route finding to keep it that way. Its easy to get into 5th class terrain if you are not careful. Descent 150' or so to the Notch Mountain Shelter and pick up the Route at the "Halo Ridge" heading above. 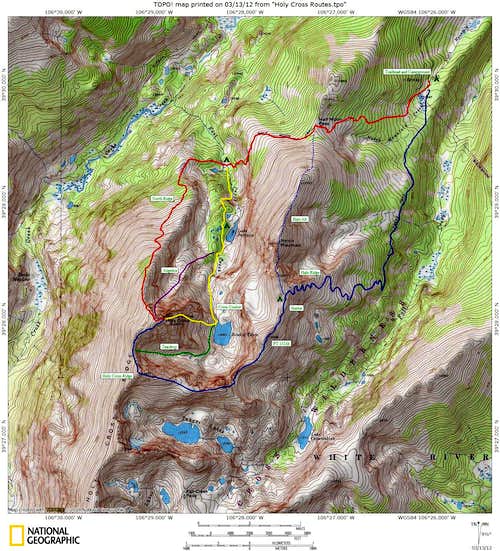