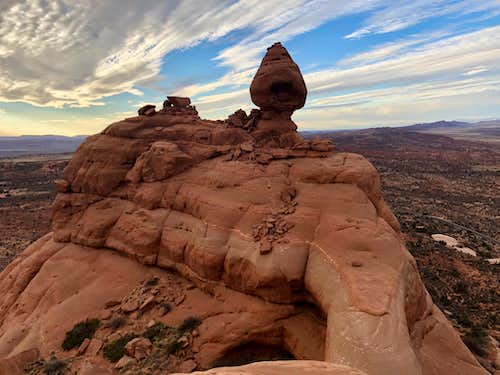 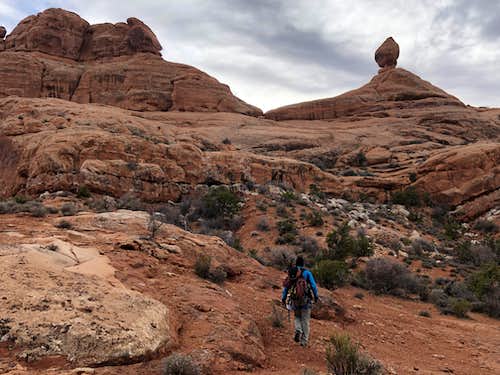 Approach to Ham Rock (right) and Harkonnen Castle (left), head for the saddle in the middle
Ham Rock is a ranked summit located within Arches National Park. The formation is pretty large and part of the formation resembles from certain view points a canned ham.

The Ham Rock/Harkonnen Castle is easy to identify. It is the largest formation west from Owl Rock.

The higher point on its east side is also called Harkonnen Castle and has 2 established routes:

Dune 5.10 and this route takes you to an slightly lower summit separated from the highest point by a large gap cca 2-3 meters apart. FA: Dave Mealey and Aaron Boyles 2001

Grumpies 5.8 + is a relatively new route established in 2012 by Derek Wolfe and Jamie Princo and it takes you to the highest point. This route has a couple of short climbing cruxes, alternating with some easier climbing and scrambling.

The vies from the summit are spectacular. Owl Rock appears tiny. Elephant Butte is nearby and La Sal Mountain are on the horizon to the east.  The tower is easy to reach, short approach and not crowded.

Follow direction into Arches National Park. Follow the main road through Arches. Pass Balanced Rock, you will be able to see Ham Rock/Harkonnen Castle as the large and long formation. Continue past Balanced Rock and make a right turn towards the Windows section of Arches/Garden of Eden.

The road follows around the formation and you can park either at 2nd or 3rd pull out parking on the north side of the road.
Below: I have used to Gaia application and I am not sure why so many lines were drawn. We did not wander that much. I had my cell phone in my pocket and at some point I did drop it. Anyhow, just an idea where to park and the approach we took. There was almost a trail on the approach. We did avoid cryptobiotic soil. 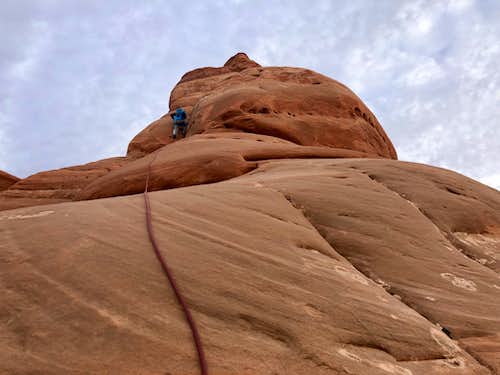 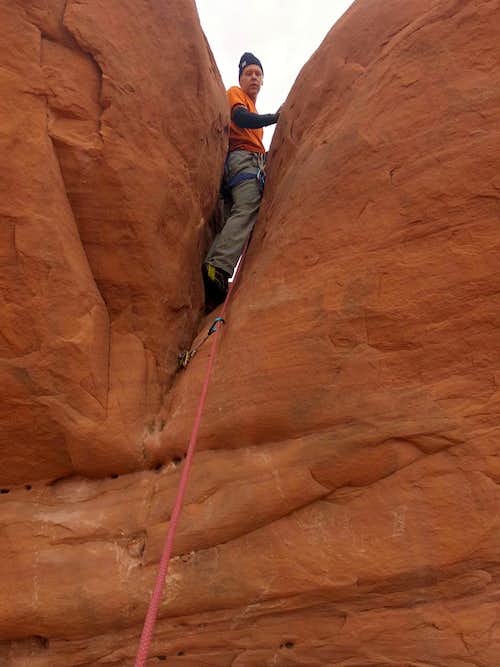 Pitch 2 - short and wide crack, 5.8+
We chose the route Grumpies since it was leading to the highest summit, and it was getting late, so we wanted to move quickly.

Pitch 1: 5.3 - Slabs with a small crack in the corner to a 2 bolt anchor. Short climbing, little steeper just below the anchors. We managed it unroped. About 20 feet in length.

Pitch 3: Start up the slick rock, low 5th class to a 5.4 crack on the north side. The crack is a little sandy, but has good footholds. Continue up to the headwall and belay from here.
Pitch 4: First Ascenders recommend from this headwall to scramble slightly down to a large boulder and belay from here. There is a shallow sandy crack, which takes 0.75 Camalot well and above the crack is even more shallow and opening. It does not really take any gear and this section is sandy. We chose to climb from the headwall up and traverse on slick reck on much easier terrain. 30 feet
Pitch 5: 5.6 chimney, nice climbing with good handholds and footholds to a large block with slings on it.
The summit is just a short scramble - class 3 - to the east. The views from the summit are spectacular.
Descent: 1 double rope rappel from the large block just below the summit. Pull to the east side.
This will deposit you just below the pitch 2.
Scramble your route back. May rappel the final short 5.3 section with single rope. 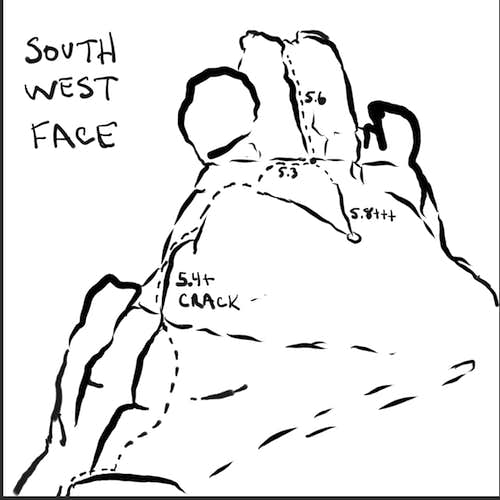 You have to pay an entry fee into Arches National Park.

The climbing is on soft sandstone and the rock gets easily damaged when it is wet. Holds rip off and climbs gets damaged. Sometimes you have to wait a few days after heavy rains before you can climb. Please respect the conditions.

Raptor closures: this formation is closed seasonally during nesting times of raptors. The closure appears annually from March 31st until August 31st.

You are not allowed to use white chalk.

Any time of the year is fine as long as you respect the raptor closures from March 31st to August 31st. Remember summers are hot in Arches and winters can be cool. We climbed in the afternoon of November and enjoyed a great sunset on the summit. 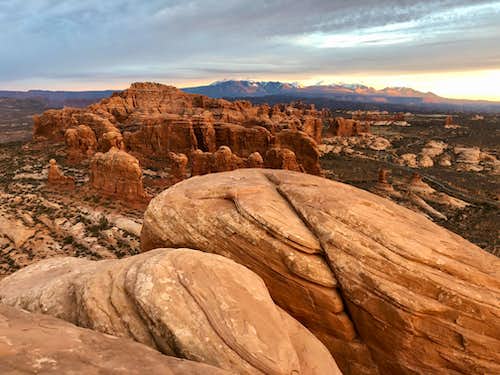 View from the summit of Ham Rock - Elephant Butte, tiny Owl Rock and La Sal Mountains in the distance

There is a campground within Arches National Park - it is towards the end of the park. The campground is open year round and you can make advanced reservations. The Devils Garden Campground info

There are many campground and hotels in Moab area. But keep in mind that this is one of the most touristy destinations in Utah and weekends are busy.