Harjoldur Sar is the highest peak in the Chot Pert Nala, a small valley branching off from the Virjerab valley, in the western Karakoram. The first ascent of Harjoldur Sar was by Pete Thompson, Aiden Laffey and Phil De-Beger on 19th June 2015.

In 2012 a Polish expedition set up a base camp at the junction of the lower Virjerab and Spregh Yaz Glaciers. They attempted peaks above the Spregh Yaz Glacier and in the Chot Pert Nala, making the first ascent of a 5900m peak they called Khushrui Sar. Realising that there were eight unclimbed 6000m peaks within reach of their base camp, we decided to operate in the same area. Our main objective was Khurdopin Sar but as it turned out we only managed to climb one peak, Harjoldur Sar. The locals suggested this name which means, in Wakhi, "the peak of the valley of the back and white yak", referring to the valley the peak overlooks to the north. 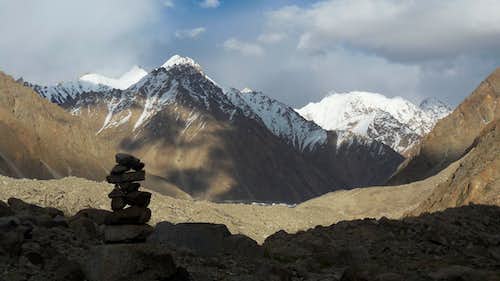 So there are still many unclimbed 6000m peaks within the Virjerab watershed. Some of those above the upper Virjerab Glacier look fairly easy, but the main problems are the difficulty of getting up the glacier and the expense in terms of porters of reaching them. I think it unlikely that any climbers or trekkers have been as far up the Virjerab valley as the Vissers did in 1925! 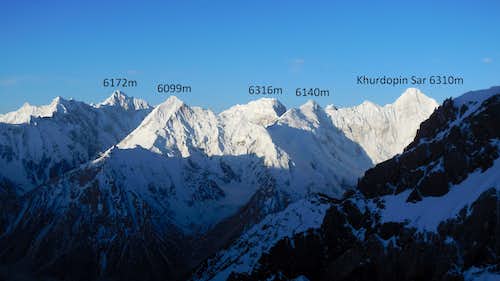 Fly to Islamabad, Pakistan. Fly or travel by road to Gilgit. The road journey up the Karakoram Highway takes about twenty hours. From Gilgit, continue on the Karakoram Highway up the Hunza Valley to Pasu in about four hours, going past Attabad Lake. This was formed in 2010 when a huge landslide blocked the flow of the Hunza River, eventually creating a lake 21 kilometres long. Boats carried people across the lake until 2016 when the Chinese finished building a road past the lake, including several tunnels. At Pasu take the precipitous road to Shimshal village in 3 hours. 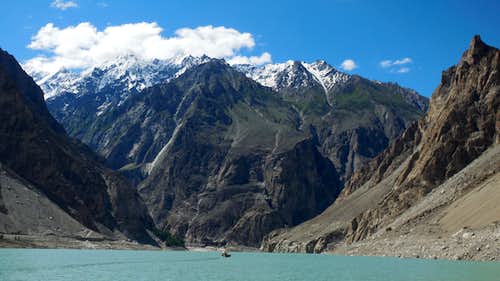 The trek to base camp took three days. The last day was on the unrelenting rubble of the Virjerab Glacier. Base camp was at the junction of the Virjerab and Spregh Yaz Glaciers.

From base camp, we crossed the Virjerab Glacier and went up the Chot Pert Nala. At one point the nala narrows to a gorge and there are a couple of short rock climbing sections which could need a rope. We bivied at 5100m. Leaving the bivi at 1.30am, we climbed through an icefall, and followed a wide gully on the south face of Harjoldur Sar. We joined the west ridge which we followed to the summit. Alpine grade PD. We were back it the bivi at 8am. 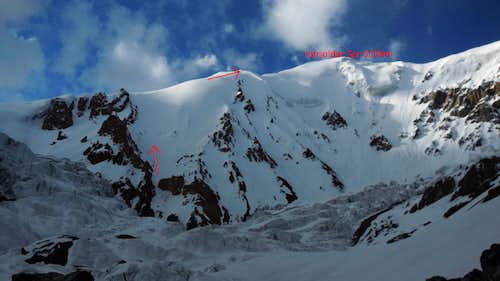