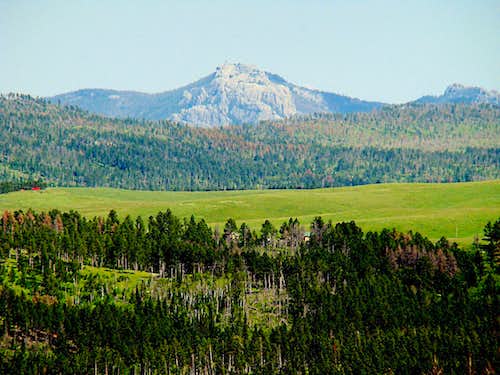 One of the mountains most prominent on the skyline along the south side of Deerfield Lake is Hat Mountain. According to Lists of John, the summit is #15 on the list of ranked summits in the Black Hills and has 369 feet of prominence. Hat Mountain is located in the Limestone Plateau region of the Black Hills. The appearance of the mountain is somewhat unique for this region of the Black Hills, in that the uppermost portion is almost entirely devoid of trees. The lower parts of the mountain sustain thick pine forests. Across Deerfield Lake to the north, is the Reynolds Prairie area. Deer, elk, pronghorns and wild turkeys are commonly seen here. Many other species are seen occasionally, including coyotes, mountain lions, marmots, foxes, porcupines, and eagles. A diverse mixture of wildflowers are seen on the slopes 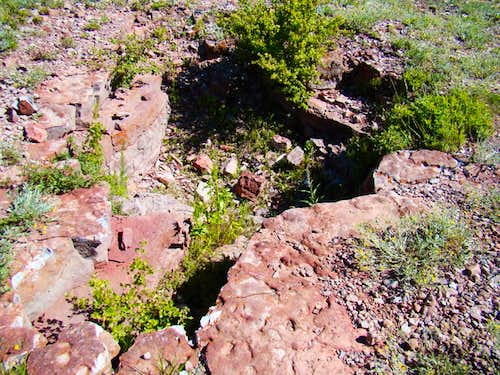 A shallow pit on the summit of Hat Mountain

Extensive work has been going on since 2010 to restore Hat Mountain, which had been ravaged by excessive and irresponsible motorized vehicle use. Work crews have been filling in erosion ruts and re-seeding the mountain. Above average precipitation for 2013 and 2014 has helped the new grasses take root. The work and supervision has been led by the Mystic Ranger District. Legal motorized access is now very limited, but foot traffic is welcomed. The first phase of the work included installation of a buck-and-pole fence by the Youth Natural Resource Program, a cooperative effort between the Forest Service, the National Park Service, the Box Elder Job Corps and students from several Native American tribes. Because of the flat rocky summit of Hat Mountain, visitors are treated to panoramic views of Deerfield Lake, Flag Mountain, Custer Peak, Terry Peak and Black Elk Peak, the highest point in the Black Hills. Visitors are asked to be respectful of this unique site by keeping vehicles on designated roads and trails, and leaving no trace. The old network of roads on the mountain have been smoothed over and planted to grass. Dining, recreation, lodging and more hiking options are available at Deerfield Lake, at the base of the mountain. 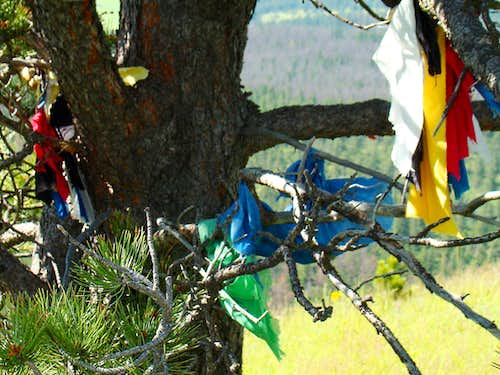 Considered to be a sacred site by Native Americans, Hat Mountain has been admired by humans for thousands of years. Prayer ties, prayer cloths and tobacco ties are commonly seen on the tree branches of the mountain. These are spiritual symbols that native peoples believe aid their prayers and meditation. The ties are made by wrapping tobacco in a cotton piece of cloth cut into squares and then tying together with string. These can then be brought to ceremonies to be burned, or left at the site as prayer offerings. Tobacco is the choice of the Lakota tribe, as they consider it their most sacred plant for ceremonial use. The Lakota tobacco comes from the bark of red willow trees. The Lakota tribe requests that visitors to the mountain be respectful of these religious offerings left by tribal members. Reynolds Prairie is one of five places sacred to the Lakota. The other four sacred sites include Harney Peak and Bear Butte in South Dakota, and the Devil’s Tower and Inyan Kara Mountain in Wyoming. The whole area of Reynolds Prairie and Hat Mountain has long been called Pe’ Sla by Native Americans. The meaning of Pe’ Sla is “peace at the bare spot”. According to some scientists and historians, this area in the Black Hills is quite capable of growing Ponderosa pine forests like the rest of the Black Hills. But, they believe that large herds of bison for centuries kept pine seedlings from maturing, keeping the area a large prairie. Most of the prairie has been privately owned, and has been the focus of political and cultural battles.

Getting There & Route Options 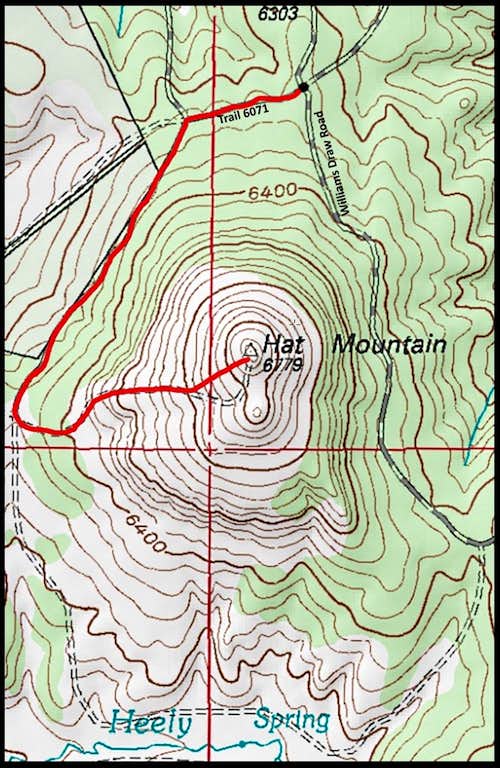 Hill City is the closest town with paved road access. From Hill City, take Deerfield Road 15.5 miles to Williams Draw Road (forest service road 691). At .9 mile down the road, you will come to the junction with Forest Service trail number 6071. Trail 6071 is for hiking and ATV vehicles only. Here are your route options: 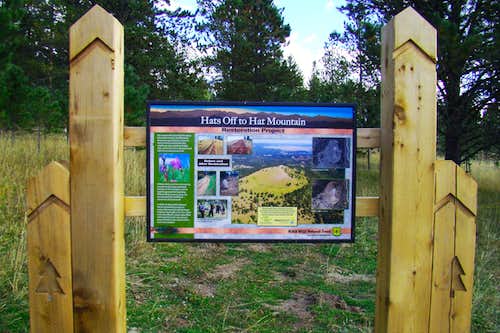 Route #1: Park at the junction in such a way as to not obstruct traffic. Continue on foot along trail 6071 for about 1 mile. To your left as you hike south, there will be a remnant of an old road/trail that heads in an easterly direction up to the summit area of Hat Mountain. Since most of the western slope is grassy, hikers can easily see their way to bushwhack up any way they want. Route #2: Continue on south on forest service road 691 and choose a safe place to park along the road, perhaps a half-mile from the junction with trail 6071. From there, it will be just a short bushwhack up to the summit – perhaps 15 to 25 minutes, depending on how fast you like to hike. Route #3: Continue on south on forest service road 691 .8 mile past the junction with trail 6071. There is a junction there with trail 6005 to the west (if you miss 6005, you will pass trail 6001 on the east about.1 mile further south). At the Road 691/Trail 6001 junction, there is also what is now a foot trail that heads off in a northwesterly direction. That trail will lead you to the south side of the summit of Hat Mountain.

Hikers are always welcome on Hat Mountain. As long as visitors do not violate motorized vehicle restrictions, there should be no problems. Watch for posted campfire restrictions. 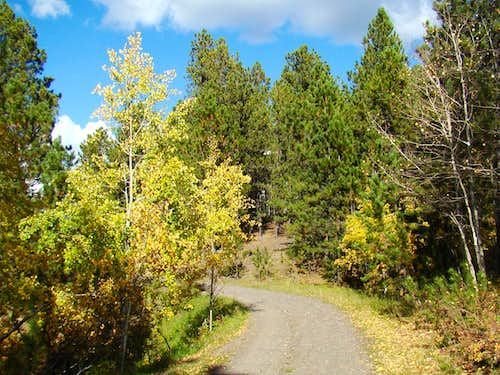 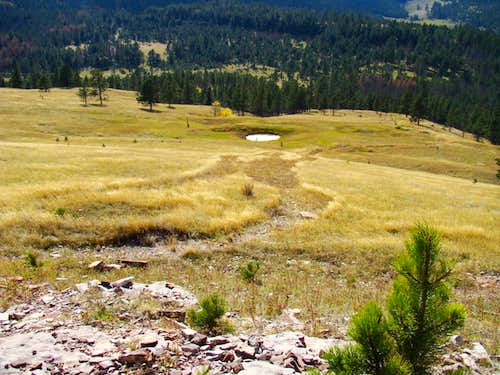 Weather changes can occur quickly and year-round. Hail, lightening and strong winds are always a risk during summer months. Rapidly developing snow storms in the winter can reduce visibility to zero, and drive wind chills to well below zero. Windy conditions, summer or winter, can increase risks for falling trees. Do not count of good cell phone reception across the entire mountain. For the latest forecasts for the Hat Mountain area, check out the area weather forecast: Deerfield Lake Forecast Hunting is allowed on the national forest land of Hat Mountain, so it is advisable to be aware of current hunting seasons in progress when you hike. For more information on South Dakota hunting seasons, check out this link: South Dakota Hunting Season Information If you do choose to hike during a popular hunting season (usually deer and wild turkey), please wear plenty of bright orange. 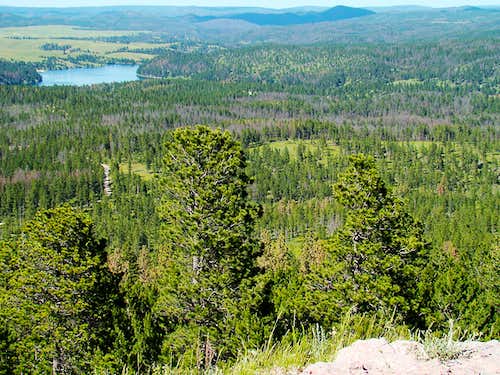 You have the option for back country camping on national forest lands. There are also campgrounds and lodging at nearby Deerfield Reservoir or in the Hill City area:

Hat Mountain is in the Ditch Creek Quad. National Geographic’s Black Hills North map is an excellent resource for this area. The National Forest Service offers free Motor Vehicle Use Maps for the Black Hills, which will help with your explorations.