Hawkins Peak is the highest peak in the High Peaks area of Pinnacles National Park.  The National Park Service map in the Pinnacles brochure lists it at 2,720 feet and the "Climber's Guide, Pinnacles National Park", Second Edition (2002) by David Rubine lists it at 2,658 feet.  It is the third highest named summit in Pinnacles National Park, after North Chalone Peak (3,304 feet) and South Chalone Peak (3,269 feet).  The very summit of Hawkins Peak is a rock known to climbers as "Tuff Dome".  To get to the top of the rock requires technical rock climbing.  The Climber's Guide lists six routes ranging in difficulty from 5.6 to 5.11a (which means that a rope and climbing hardware are essential).  In addition, access to Tuff Dome may be restricted by the NPS between January and July to protect raptors nesting in the area.  If you have your heart set on scrambling around near the top of this Peak then you should definitely contact the Pinnacles Visitor's Center at 831-389-4485 to determine its current status.

Recommendations:  For climbing, this route is highly recommended in the Guide book.  For hiking, the trail up to the summit area is one of the most scenic in the Park.  North Chalone Peak is a nice hike if you absolutely must bag a peak, but the High Peaks area provides the most quintessential Pinnacles experience.

You need to first determine if you want to approach this Peak from the west side of the Park or the east side.  If you're going to camp at Pinnacles then you'll want the east side since there's no campground on the west side.  Note that highway 146 which goes into the Park from both directions does not go through the Park - in other words, the two sides of the Park are not connected by road, only by trails.

The drive in from the west is approximately 13 miles and 25 minutes from the town of Soledad.  The trail from there is half a mile shorter with around 140 feet less elevation gain then hiking in from the east.  The one caveat is that the road is narrow and twisty and not recommended if you're pulling a trailer or driving an RV.

If you're driving in from the east then the road as far as the campground is reasonably wide and not too steep or twisty.  However, during the peak seasons there may be no parking available at the trail head and you might have to take a shuttle in.  They run every half hour.  Call the Visitor's Center at 831-389-4485 to inquire about current conditions.

FROM THE WEST - CHAPARRAL TRAILHEAD

The hike in from the west starts at the Chaparral Trail Head at 1,401 feet and takes the Juniper Canyon Trail for 1.2 miles and then the Tunnel Trail for 0.6 miles to the intersection with the High Peaks Trail.  From here there are two main alternatives.  One way is to hike cross country to the west for under a tenth of a mile to Tuff Dome.  A second way is to continue north on the High Peaks trail to just over the highpoint where the trail makes a sharp turn to the left.  At that point turn to the right on a faint use trail and go about a tenth of a mile to Tuff Dome.  The second approach is recommended in the Guidebook and I would favor that route in order to prevent a proliferation of use trails in the area.  The Total distance is around 2.0 miles and has 1,319 feet of elevation gain. 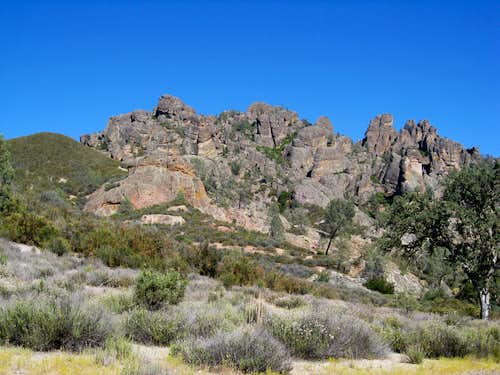 View of the High Peaks Area from the Chaparral Trail Head 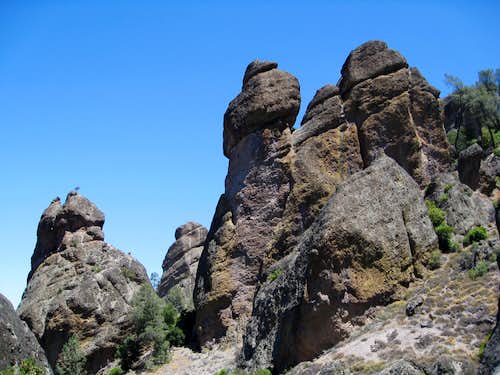 
It took me about 50 minutes along the Juniper Canyon Trail to reach the intersection with the Tunnel Trail. 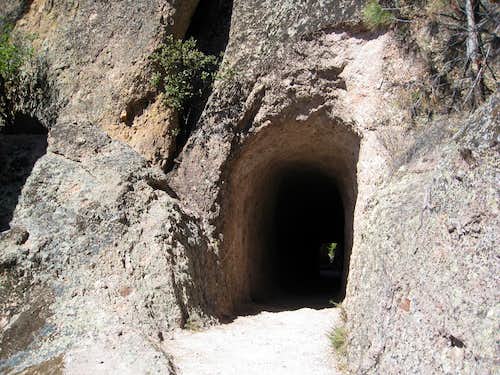 The Tunnel Trail is aptly named.  Here is the entrance to the tunnel as you're going up the trail. 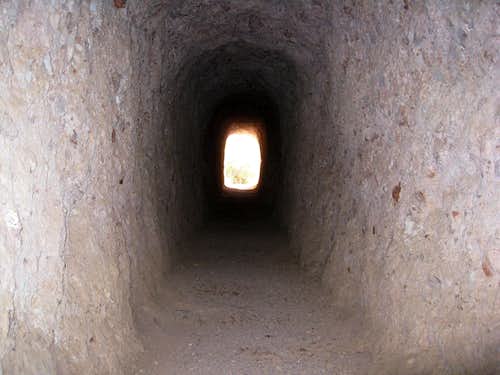 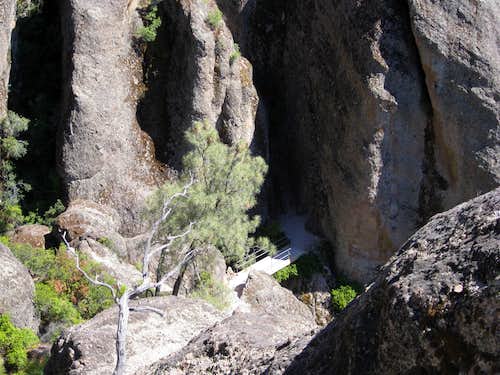 The tunnel in shadow as seen looking back down the trail from above. 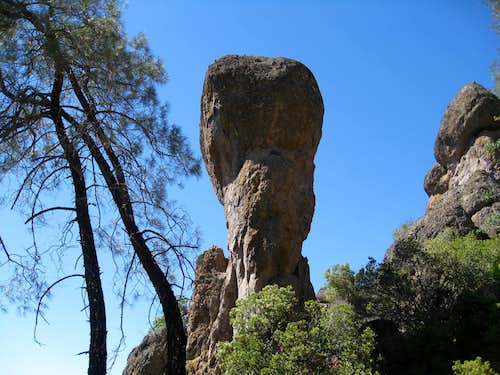 
A pleasant and scenic trail.  These trails were safe and well-maintained as of 2014.  Trekking poles aren't necessary; good hiking boots are recommended.

Estimated travel time for the Tunnel Trail portion of the approach is around half an hour. 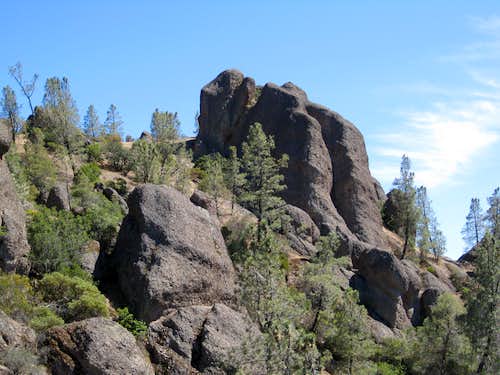 The objective.  When I was there in June, 2014, I honored the restrictions and stayed on the main trail and didn't go up to the summit area itself, but you can see from this what it's like. The Climber's Guide has a picture and descriptions of the routes.


FROM THE EAST - FROM BEAR GULCH DAY USE AREA

There are a couple of routes up to Hawkins from the east:  the Condor Gulch Trail and the High Peaks Trail. 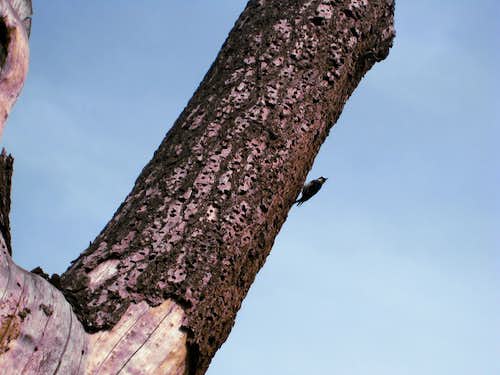 
First, though, you might want to check out the trees around the parking lot, restrooms and picnic area.  I've never seen trees so thoroughly drilled by woodpeckers before.  There's a sign about it.

The Visitors Center there also has some exhibits about the history, geology, flora and fauna that you might find interesting.

Take the Condor Gulch Trail for 1.7 miles then the High Peaks Trail for about 0.5 miles to where the trail makes a sharp bend just before the top of the ridge.  At that point take a use trail in a southerly direction for about a tenth of a mile to Tuff Dome.  If you miss that trail, you could go to the intersection with the Tunnel Trail and proceed in a westerly direction from there to Tuff Dome.  I haven't gone this route myself yet, so if there are any hikers/climbers who'd like some company on it I'd be interested in joining you. 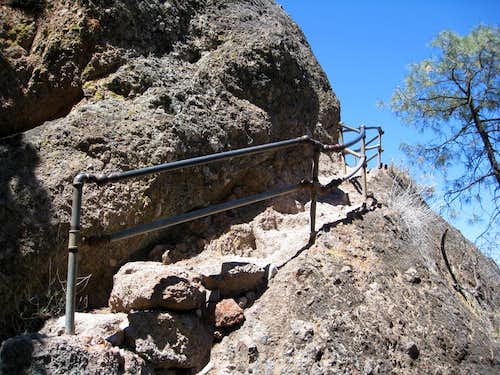 
The final 0.7 miles of the High Peaks Trail is the most fun, interesting or scarey part of the hike, depending on your point of view.  There are steps cut into the rocks in numerous places, usually with handrails as well.  It's often quite steep and narrow.  Not much room to pass other parties, but these portions are fairly short so it can be done if people are patient.

This is a National park so you need to pay a fee and tape the receipt to your windshield.  Camping is only allowed in the campground - no wilderness camping.  Pets are not allowed on the trails.  Heed the signs about restricted areas where you're not supposed to go (so as not to disturb the raptors).  Better yet, have a heart-to-heart talk with Park personnel about your plans to get the most accurate information.  If you're rock climbing, you can also discuss with them where to register for your climb.  That will make finding you easier for the rescue party should you fail to return as planned.  Flashlights are needed if you go through the talus caves at Bear Gulch or the Balconies.  The NPS website provides a pretty good overview of safety concerns such as snakes, poisonous plants, etc.

Here's a table concerning the climate in the nearby town of Soledad.  You can judge when there would be enough daylight, comfortable temperatures, and low probability of getting rained out to do the trip you want.  April is generally a highly-regarded month for trips to the Pinnacles.

The campground at Pinnacles has around 100 sites.  It can get full at the height of the season.  Make reservations at recreation.gov or call 877-444-6777.
There's a swimming pool there which definitely has an appeal when the weather is warm, which seems to be most of the time.  There's a small store as well.

The internet lists one hotel in Soledad, the Valley Harvest Inn.  If it's the hotel that I remember seeing, then it's fairly new.  The internet search also brought up 22 restaurants as well, including McDonalds, Burger King, Taco Bell and Starbucks as well as fancier places.  I ate at the Burger King on the southern portion of Front Street and the highway on-ramp was nearby, too.  There was also a gas station close by.

From the east side the closest services would be in Hollister, around 33 miles away.

If you click on "Things to Do" you can get information on both hiking and climbing in the Park as well as ranger talks, etc.  If you click on "View Park Map" on the left under "Park Tools" you can look at the same map that the staff give you when you enter the park and that I referred to in doing this write-up.