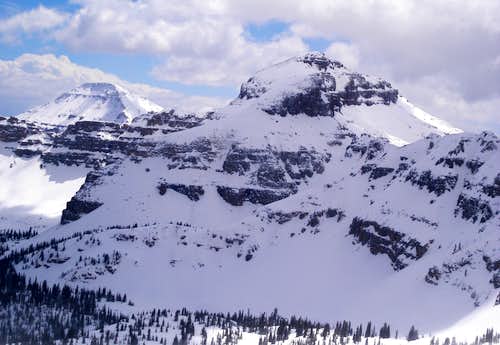 Hayden Peak (12479) lies ahead. Mount Agassiz (12428) is in the back left.
In a range where most peaks are only Class 2 by their easiest routes and where many of them require very long days or multi-day outings to climb, rugged Hayden Peak is a standout because its easiest route is at least Class 3 and, since it is literally beside the highway, a fit climber can do it in half a day.  Moreover, it's a visually spectacular peak with outstanding views of neighboring peaks and lakes.
Hayden's closest neighbors are Kletting Peak to the north, East Hayden Peak to the east-northeast, and Mount Agassiz to the southeast.  It is possible to pair Hayden with any one of these peaks in a single day.  The Hayden-East Hayden traverse goes at Class 3-4.
It seems that pairing Hayden and Agassiz does as well, though that is gleaned from log entries and portions of other routes that coincide with that one (there is no SP page for a Hayden-Agassiz traverse itself).  From the summit of Hayden, it does not look difficult to go to Kletting, but I haven't found any concrete information on the route.
Ferdinand Hayden left his name in the history of the Rockies as a geologist and surveyor.  (He was also a Union physician during the Civil War.)  Of his many surveying expeditions, the most famous is the 1871 expedition to the Yellowstone region.  Along on that survey were also painter Thomas Moran and photographer William Henry Jackson.
Hayden's report, along with works by Moran and Jackson, were key factors in Congress's decision to creating Yellowstone National Park, the world's first national park and one of its most beloved.  Without the contributions and influence of those three, it may have taken much longer to designate Yellowstone as a national park and protect it.  It may not even have happened at all; one has to wonder what might have happened had commercial interests taken hold of the region first.  Fortunately, we never had to find out.
Today, Hayden's name lives on not only in history books but on the landscape as well.  For instance, in addition to the Hayden Peak in Utah, there are four other peaks officially named for Hayden represented here on SP.  One is in Idaho, and the other three are in Colorado.  In Yellowstone, there is Hayden Valley, one of the top spots in the park for wildlife viewing.  A garter snake, a snail, and a sedge are named for him.  There is a town in Colorado called Hayden.  And there is a Hayden Hall at the University of Pennsylvania. 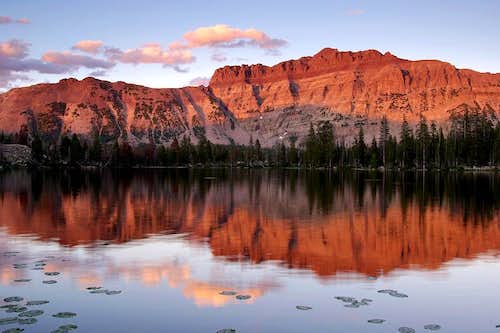 All it took was the short 20 minute hike to Ruth Lake to realize that this walk probably yields the best "exertion to beauty" quotient in all of the Uintas. Darn near equal to zero. 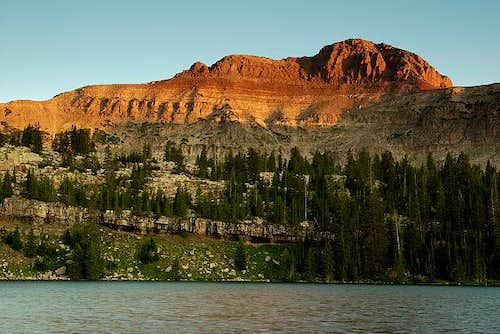 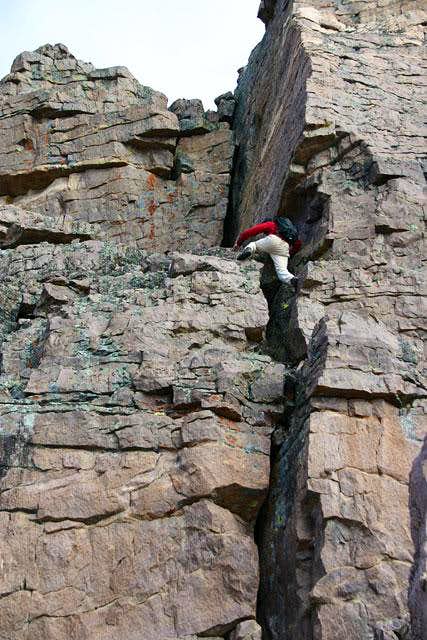 Working up 5th class terrain. Halfway up the second crack there is one 5.6 move that leads you to the top.

From either Evanston (WY) or Kamas (UT), take the Mirror Lake Scenic Byway.  This 54-mile road is the highest paved road in Utah and takes about 90-120 minutes to drive without stops.  At Hayden Pass, more than 30 miles north of Kamas, find and park in the large, well-signed parking area for the Highline Trail, likely the busiest access point to the High Uintas Wilderness.

There is no fee to drive on the road, but there are self-service pay stations at several spots along the byway (as well as one staffed pay station near the Kamas end).  Anyone stopping to hike, camp, or otherwise do more than just hop out of the car and take pictures is supposed to pay the fee and display a permit on the dashboard.  The interagency pass does cover this fee.  Annual passes are available as well.
In 2013, the fee was $6 for a three-day pass and $12 for a seven-day pass.  See the link in the section above for more details.

Summer is best, and early fall.  The byway is closed during the winter.

There is no developed camping at the trailhead, but one could head off into the woods a short distance as long as that is not against posted regulations (check at the trailhead first.)  Several Forest Service campgrounds are along the byway, with the closest being small Butterfly Campground less than a mile away.  About 3 miles away is Mirror Lake Campground; sites for it are reservable through recreation.gov.
See the link in the Getting There section for more information about camping.

www.ksl.com offers good weather information for the state of Utah.

As of Sept 6th 2014 there was a rope up the pitch in the above photo. It seemed pretty solid.

Summited on 8 Sep 18 as the weather allowed. Rope is gone. Followed trail over to SE side and scrambled to the top.