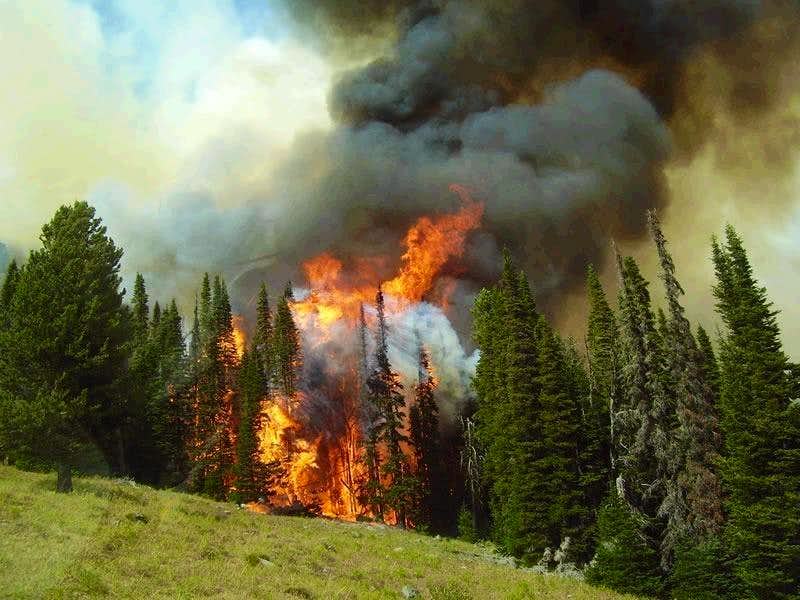 The front of the Green Acres Fire as it moves down the east slope of Heavens Gate in the Seven Devils of Idaho. Photo was taken in August of 2006 by A. Hiebert.
« PREV NEXT »

Could you feel the heat??

Well, I better answer some questions on this photo since they are starting to mount. This fire was last August and September above Riggins Idaho. It was started by lightning and closed a very popular recreation area for a few weeks. There were actually several fires that grew together during a period of extreme burning conditions. I didn't actually take this photo, a coworker did. I was working on the fire but in another area doing something much less exciting (thats where they put you when you get old). Generally firefighters on the line all pack cameras to get shots like these when they happen. But it usually doesn't happen. Most wildland firefighters will tell you the #1 emotion during a fire is boredom. Yes, there are extreme moments, but they are less common. By the time they get people on fires, the fire has generally done its thing. This fire was a bit more exciting in that it went through several active burn periods. Generally people don't get this close to such serious flames due to safety concerns. But they were on an open road in an area of light fuels. The fire was also pushing away from them, but they had to stay put since the only way out was blocked by the fire. The road is off the photo to the left. Having been this close to such flames in the past, I can say, yes they could feel the heat.

Can you get a little closer next time? Great shot- thanks

i took this picture. who posted this?

I posted it. Got it from a work file but until now didn't know who took it. From your name, I know who you are, you might not know who I am. I'll send you a PM. I can attach the photo to your profile, but will contact you first.

I don't know what a PM is. You don't have to attach it to my profile because I will probably never use this site. I was searching for pictures from the Heaven's Gate Complex and it brought me to this picture and then I realized that I had taken all the Green Acres Fire pictures you posted. Who are you and why might I not know you? Were you on this fire?

Hi Hiebert, PM stands for "personal message". Go to your profile to see your personal messages. Or look at the upper left hand corner of your screen and find "Inbox". Click on that and you can see the message I sent you. It has a longer explanation of this photo, how it got here and who I am. Yes, I was on the fire, but was a single resource not tied to the crew. I have posted a handful of Green Acres fire photos. One was taken by someone else and he is cited in the caption because I knew who he was. You'll have to let me know if you want your name on the captions or if the photos need to be removed or whatever. See the personal message, its all in there. I also sent a message to your email. I knew a person on the crew took the photos, but until today, didn't have a name; glad to finally know.

oh and yeah, i could feel the heat. the picture in blurry in the middle because i took it through a window. The windows were hot to the touch even though we really weren't that close. This is one of the more boring picuters actually.

Wow what a shit storm!

Are you maybe a fireman? ;-) Paolo

No I am not a fireman, but when the fire season gets very hot and resources are stretched thin, they pull some non-firefighters away from our desks and make us go out. I worked on this fire, but actually did not take this photo. The person who did is a fireman (firewoman actually). Read the above comments for more information.

That's closer than I ever want to get to a fire that size!

Yes, it is, but if you look at the discussions above you will see its not mine. I lifted it off a coworker.

looks a bit terryfying I must say!