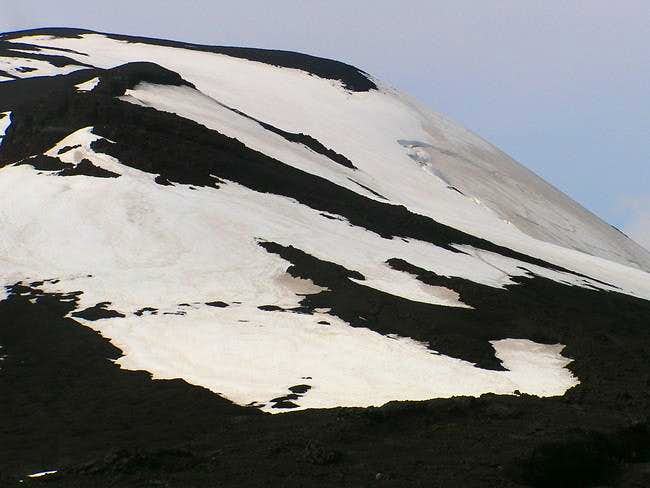 Hekla is undoubtedly Iceland's most famous mountain. It is the second most active volcano in the country erupting every 10 years since 1970. The last eruption was not much by Hekla's standards on February 26, 2000 as it only spewed a plume of ash 15 km high followed by a few days of lava spilling out but many from Reykjavik went to witness the spectacle. Here is a link to some photos from an eruption in 1991.

Hekla was believed in medieval times to be the entrance to hell. It's name means "hooded" as it is capped by clouds most of the time. It dominates the Þjorsardakur Valley and is located about halfway between Reykjavik on the SW corner of the country and the Vatnajökull, the massive glacier on the SE corner of the country. That glacier, by the way, is just a bit larger in size than the state of Connecticut. Hekla itself is a series of ridges oriented southwest to northeast with the ridge becoming more squat in stature with each eruption. There is a fissure that runs for 5 km along the ridge of Hekla.

The first eruption that was probably witnessed may have been by the seafaring Irish monk St. Brendan. He sailed past in the 8th century. The belief that Hekla was the entrance to hell was based on the eruptions that occured after Iceland was settled in 874 although the earliest actual recorded eruption was in 1104 that buried several farms in the area. This eruption laid waste to the valley and has never been resettled.

First ascent was not until 1750 by two students, Eggert Olaffson and Bjarni Palsson.

Despite the reputation, Hekla is a popular hiking/climbing destination. A trail has been re-established since the 2000 eruption most of the way up the mountain. The road to the trailhead is possible with passenger cars but probably not advisable. Large four-wheel drive trucks (of which there are MANY in Iceland) can get to the base of the mountain while the actual trail starts a few kilometers back. The climb will take you about 3 and a half hours to summit and there are marked posts about the first half of the climb. The rest is a broad ridge walk about half on snow. You'll go past 3 craters and some steaming sulphur just to let you know this one could blow at any given moment.

Getting to Iceland is up to you individually although I can tell you that Icelandair flies to Reykjavik from 8 US cities: Anchorage, Boston, Denver, Minneapolis, New York, Orlando, Seattle and Washington DC as well as most major European cities. All international flights fly into Keflavik Airport about 40 kms. west of Reykjavik. From there you can rent a car from Budget, Avis, and the largest car rental place there is Hertz. I would advise booking a car/truck early and don't be surprised by the ridiculous price you are charged. I found car rental in Iceland to be about 4 to 5 times what it would be in the US. Buses don't run to anywhere near Hekla and it's not a major tourist attraction although you cvould check with This Is Iceland, a company that specializes in outdoor activities and destinations.

Once you get your supplies, head out the parking deck and turn right (north) and exit out onto the large east/west road on the north side of the mall called Miklabraut. Take the road east and follow signs for Highway 1 (also known as the Ring Road). You'll take Road 1 about 89 kilometers east to Road 26. Get on Road 26 north and go 49 kilometers to Road F225. From here the "road" gets questionable and is more of a dirt track. Take this road east for 6.7 kilometers to a sign poiting south for Hekla. Turn right onto this road and go 6 km to another sign for Hekla. Take that fork and go another 2 km to the trailhead. The trailhead also is not a bad place to camp.

Here is an interactive map of Reykjavik that might be useful as well.

No permits or fees. No one there to collect them if there were. 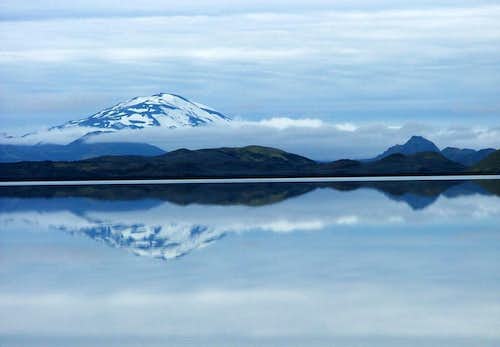 From the summit register (oddly enough located at the trailhead), it appears people climb this one from about May to October although June to September is probably more reasonable. Out of season you would not have any views most likely and howling winds.

Camping is free at the trailhead although finding a flat spot on lava rock is a trick. (I slept in my rental car)

See the info in the Mountain Conditions section for accomodations on a nearby farm (this is common in Iceland for farms to do this for extra income).

Nearest regular campsite is back about 15 kms south on Road 26 before Road F225. Follow the sign. There is no need to make reservations for campsites anywhere in Iceland, there is always plenty of room and no designated campsite (you just set your tent up in a large grassy area provided). The fee is usually 600-750 kronur per night ($8-10).

A helpful website for camping in Iceland is located here although it's easy to do on your own as you go.

Best bet for mountain conditions is the nearby Leirubakki farm (which also supplies fuel, meals by arrangement, hot tubs, horses and accomodations). They can be reached by fax at 487-6591 (country code is 354).

There is no ranger/warden station in the area that oversees the mountain.

Things to Do Nearby

Geysir, Þingvellir and Gullfoss are all fairly close. Geysir is the one that the word originally came from. Gullfoss is an enormous waterfall nearby and Þingvellir is a forested area surrounded by mountains with Iceland's largest lake. There is also a chasm running through it where the North American and European continental plates are separating. Each of these is well worth seeing.