Hen Hole Peak is the higher of the 2 pointed peaks north of Thousand Lake Mountain overlooking the northern reaches of Capitol Reef National Park. Though scarred by small fires, it still boasts a small forested summit with tremendous views of south-central Utah from the Tushar Mountains to the Abajo Mountains.

From the pullout described in the section above, walk in the sagebrush to the northwest and traverse straight west once above the grove of Aspen. As terrain skirts the southern slope of the false summit, a well-worn travel can be found leading to a clearing to the north. The slope to the west is covered by a large number of dead trees (mostly fallen). Meander up this difficult terrain to the west. Once past the dead, fallen forest, switchback up the slope to the southwest and continue past the healthy pines atop of rise. Head to the gully to the west-southwest, which is the easiest way to the summit.
Round-trip Distance: 2 miles
Elevation Gain: 1100 feet 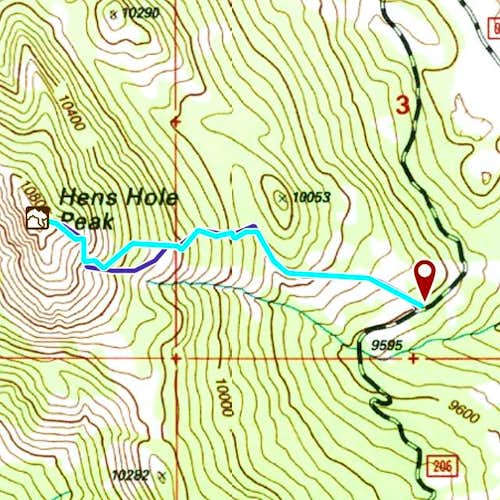 The area is in the Fishlake National Forest and managed by the US Forest Service. No permits or fees required. Please practice Leave No Trace ethics.

Year-round though the road is socked in by snow in the winter.

Elkhorn Campground is the nearing official camping area though there are several pullouts for primitive camping in the region. There is also Cathedral Valley Campground in Capitol Reef National Park, which is fairly primitive as well.