This is a classic Cody route - 160m, WI4. The drainage contains several other great routes as well : (none of which I have climbed)


Here's a breakdown of the three pitches we climbed :

P2: 45m ?, WI4 - "airy headwall" (steep to vertical), followed by another broad ledge. Rap chains / bolts on right side. A tree with rap slings is also located further off to the right. Be careful of knocking kitty litter loose rock down while rappelling from either :) 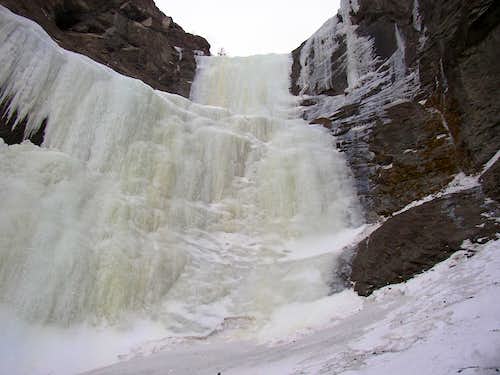 P3: 50m, WI3 or less - rolling ice which gradually peters out to bouldering. A tree with slings is located off to the right.

There is supposedly a 20m WI3+ curtain about a quarter mile up the drainage, but we didn't do it.

If it's windy (which seems to be usually), be mindful of small rocks and such coming down off surrounding cliffs while belaying the second pitch.

Descend via rappels, then downclimb the approach gully.

From the end of the South Fork Road, either

In either case you will have to cross the south fork Shoshone. During the winter it may be frozen over, otherwise you may want to invest in a pair of waterproof fishing waders :)

After picking up the trail, head up the drainage to the base of the climb. Approach time should be an hour or less.