Hochalmspithe is the highest mountain in Ankogel group, and most certainly the most beautiful glacier summit east of Grossglockner. From whereever in the east you look on the high Central Alps range of Hohe Tauern, you will see its glaciers shining above green forehills. 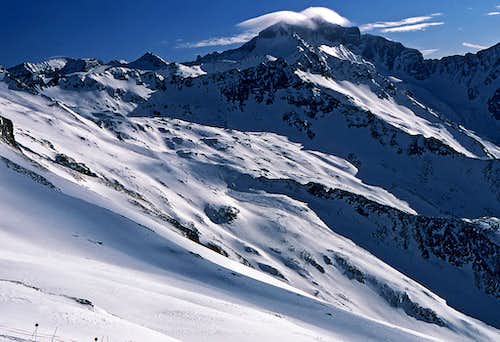 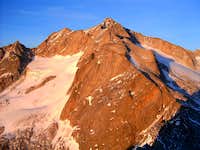 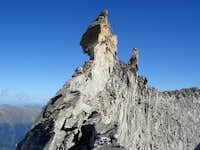 As almost entire Hohe Tauern range also Hochalmspitze is built of solid granite. Therefore on its ridges and walls, you will see many wild rock forms and on lower parts of the mountain, glacier waters stay in many lakes.

The summit of Hochalmspitze sends many long ridges in all directions. Actually close to the main summit in these ridges there are some nearby lower summits, forming the narrow Hochalmspitze group: Preiml-Spitze on the NE, Grosselend-Kopf on the N, Schneewinkel-Spitze on the SW, Winterriegel, Kaerl-Spitze etc.

While the main Hohe Tauern range goes north of it, a long ridge, heading in the NW-SE direction, is connecting Ankogel with the Hochalmspitze group. On Grosselend-Kopf a strong ridge deters towards the E and beyond the Preimlscharte (2950 m) it culminates in Preimlspitze (3133 m). This ridge and the ridge towards Ankogel are rising above the Grosselendkees (glacier).

A strong ridge (Detmoldergrat) goes from the main summit in the SW direction towards Saeuleck. In it the following peaks are rising: Winkel-Spitze, 3112 m, Schneewinkel-Spitze, 3016 m and Gussenbauer-Spitze, 2978 m. Between the SW and NW ridge the Winkelkees (glacier) lies.

From the summit a strong ridge goes also towards the SE. On the low part before Zsygmondykopf, 3152 m there are granite towers, called Steinerne Maennln. On the southern side of this ridge a rapidly melting Trippkees (glacier) lies. Between the SE ridge and the Preiml ridge a broad Hochalmkees (glacier) lies. In some parts it is rich with crevasses but in winter it also enables a long but comfortable ski ascent.

It is quite interesting. In 1855 four men from Gmuend, guided by a hunter from Malta ascended the eastern part of Hochalmkees. A big crevasse stopped them. Later, they climbed again, reached Steinerne Maennln, but did not proceed, although it was a calm, sunny day. On the same month Martin Krall with companions came, but in a dense fog they climbed the nearby Grosselendkopf instead of the main summit. In August 1859 Anton fon Ruthner reached the foresummit, the 3346 m high Schneeige Hochalmspitze (Snow-peak), but he and his guide didn't dare to climb the exposed ridge to the main summit (only 5-10 minutes). So a few days later, on August 15th, the famous Paul Grohmann came and took the victory. But did he really? This was the official story until 2010 when Hans Jungmeier found a few more than 150-year-old letters that were kept in Martin Krall's archives. On August 30th, 1855, the highest summit of Hochalmspitze were reached by Josef Moritz from Eisentratten with the local guide Andreas Pucher from Grosshattenberg in Liesertal and Jakob Haman. They did not however raise on the top the usual ciarn, so the first-ascent history turned into a mini mountaineering "crimi". 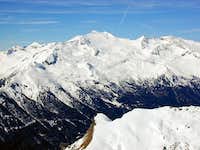 Why to climb it?

The mountain is mostly visited by mountaineers and skiers. Although being surrounded by many huts, Hochalmspitze is not an easy mountain. In the close neighborhood there are no mass sports centers and no cable car penetrates its slopes. To earn its wide panorama a mountaineer must be able of some easy climbing, glacier crossing, few approaches are also steep and exposed. Still, reaching the summit of Hochalmspitze is one of the most desirable goals in this region.

Views On Hochalmspitze From The Distance

The eastern side of Hochalmspitze is flat enough, the broad Hochalmkees covers it. Also, southern slopes are not steep, until the summit ridge. But the Trippkees has almost melted in the last years. The western side is the steepest. Through the summit wall, a few couloirs are cut. On the northern side Grosselend-Kopf, the fore-summit is covered by the broad Grosselendkees.

The southern, eastern and northern approach all start in the beautiful Malta valley, being guarded by the picturesque town of Gmuend, lying already on the Salzburg - Villach highway. 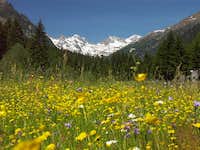 1. Southern approach. Driving by car into Malta valley you can deter in Malta village to the left, drive by a narrow, but good mountain road through the Goessgraben and reach the parking place below the Gosskar lake dam (1670 m). From there, you can reach the Giessener Huette (2215 m) by a steep, for public traffic closed road, appropriate for a mountain bike.

2. Eastern approach. After passing the Malta village you stop in the Maltatal by the Gmuender Huette, 1186 m. There a steep forrest road deters left, closed for public traffic. After it finishes (at the altitude of cca 1900 m) a marked path brings you to the Villacher Huette, 2194 m. This hut is not regularly serviced.

3. Northern approach. The road through the main Malta valley is soon after the Gmuender Huette closed and to continue to the huge Koelnbreinsperre (dam) you must pay toll. This road is opened from the end of May till first snow, so it can be used for late spring ski tours and for summer ascents. From the big parking place by the dam (1950 m) you continue a 2 hours walk by the lake and reach Osnabrucker Huette (2026 m).

4. The approach from the West starts in Mallnitz, a small tourist town, which can be reached either by the road from south (from Moelltal) or by train, coming through the main Hohe Tauern ridge by the tunnel from Badgastein. The train can also carry your car. From Mallnitz you go by Seetal (valley) eastwards, reach the station of Ankogel cable car which brings you up to Hannover Haus (2719 m). Reaching Hochalmspitze from this hut is still a long, tiresome endeavor. The other possibility is to go from Mallnitz into the Doesenertal (possible by car to the altitude of 1400 m), walk to Arthur-Schmid-Haus (2272 m), and from there take a long hard ascent to Hochalmspitze over the Saeuleck summit. You can see a detailed map on: http://www.austrianmap.at/.

2. From Villacher Huette, 2194 m. Towards the West to the glacier, over it to Steinerne Maennln or Preiml Scharte - summit. Glacier ascent. 3 h 30 min.

3. From Osnabrucker Huette, 2026 m. The hut - on the Preiml Scharte - summit. Glacier, steep ascent through the couloir under Preiml Scharte. 4 h.

5. From Hannover Haus, 2719 m. First to Grosselend Scharte, 2674 m (cca 2 hours). From there two long routes go towards the summit: Over the Hannover Scharte and Grosselend Kopf (I don't know - could be difficult glacier ascent) and by the Cellar Weg (path) on Lassacher Winkel-Scharte and by the Detmolder ridge to the top.

On Hochalmspitze's NW face there are also some harder (ice) climbs. Conditions for ice-climbing is best in early summer. 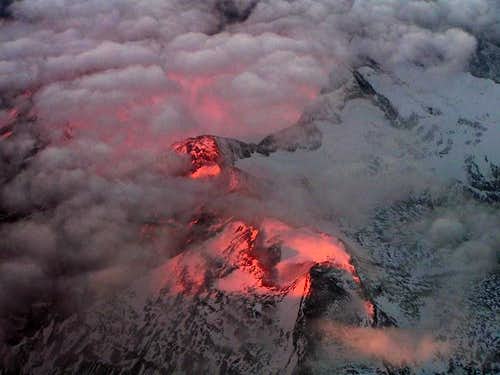 The mountain lies in the Hohe Tauern national park, so you are obliged to strictly obey the rules of protecting nature. For the road to Koelnbreinsperre you need to pay a toll.

The best months to climb Hochalmspitze are in summer - from the start of July when the weather starts to stabilize - till autumn. In spring there are good conditions for tour skiing, but for the whole ascent from Malta valley snow must lie also on the altitude of 1200 meters, while for late spring tours the road to Koelnbreinsperre is closed till the second half of May and the road to Gosskar lake opens only with July 1st. In summer the summit can be reached in one day, while for a ski tour you will need two days. See also conditions on the mountain with this live web camera.

Climbing Hochalmspitze you can use the following mountain huts:

In the yearly book of the german/austrian alpine clubs for 2010 there is an interesting article by Heinz Jungmaier: he has found some - more than 150 years old - letters that include a report about the really frist ascent: That has been done on August 30th 1855, by Josef Moritz from Eisentratten with local guides Andreas Pucher and Jakob Haman.

Interesting news! I will immediately have a look - I hope that's on the web, I usually find them. Thanks a lot! Vid

Aha. It's Jungmeier. There are other articles as well...