0. General. From 760 m to 2139 m, exposition W and N. Good path through forests till 1700 m, above a very steep path, scramble and easy climb. All the time marked. Gear: good shoes, poles. On the Swiss Hiking Scale the overall difficulty would be graded T5/T4. 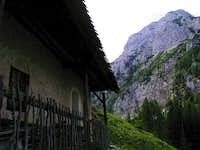 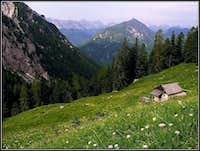 You start the tour on the upper part of Freibach Stausee / Borovniško jezero. By a mountain road you can drive up to Jagouc farm or even a bit higher, where the mountain road is slosed for public traffic (some 780 m). You follow good marks first by the road, but when it enters a ravine the marked path goes directly upwards. You follow the path through the woods, it crosses the road several times, until on the altitude of some 1350 m it leaves the road for the last time. The path still goes directly upwards until at some 1600 m we come out of the woods, on the bottom of alpine meadow there's a welcomed water source. Over the meadow (with two huts) we continue to the saddle, some 1700 m. (This saddle - Jagoučevo sedlo - can also be also reched by a marked path from the east, from a long valley, which ends below in Wildenstein / Podkanjska vas. We park by the inn, go to the waterfall and then right of it by the valley up.) To the saddle some 3 h 30 min. 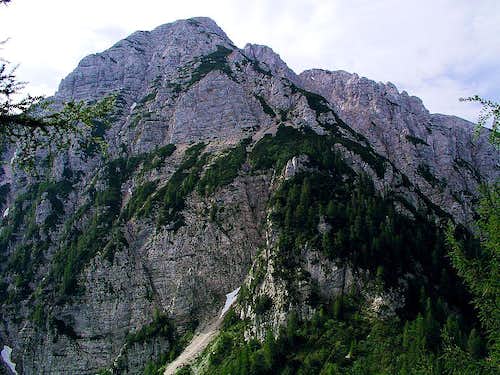 From the saddle below Hochobir the path first crosses steep slopes towards the right and then ascends steeply over the slopes. Pine bushes help us pulling up, in rocks you can see a few old pegs, which are useless now, you gain altitude quickly. After some 150 meters you reach the main ridge again. Actually this is the NW ridge of Hochobir, on our left we see crumbly rocks of the North face. Now the path continues by the ridge, but not strictly - it rather seeks the best passages on one and the other side. On the left there are rocks and unpleasant, steep scree slopes, on the right there are rocks, covered with pine bush. The path is tiny or almost lost on some places, but the route is well marked, so you have no problems following it. Some 150 m below the summit some passages need easy climbing, but nowhere harder than UIAA I degree. Actually, this is still more a steep path and scramble than climbing. But the slopes are steep and no mistake should be made. Just below the summit the slope gets less steep and we walk-up the last 50 m. From the saddle we need around 1 hour for the ascent.

For a descent you can use the same route, or you can descend by the SW ridge of Hochobir to Šajda saddle and by the road down to Freibach Stausee / Borovniško jezero. A good idea is to leave bicycles on Šajda saddle (or even higher on Obir slopes, if possible).