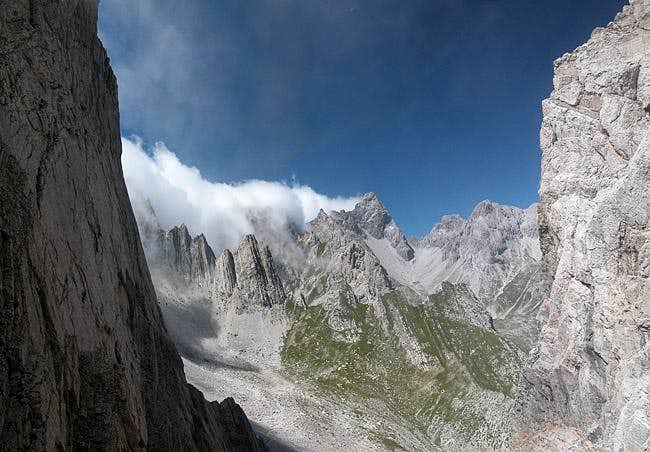 Still, the most impressive aspect about Hochstadel is its north face. It is supposed to be the third highest rock face of the Eastern Alps. (Of course it depends upon what you count because with 1300m it is lower than the Monte Agner, Triglav and Watzmann faces, all in the Eastern Alps). Hochstadel is a typical Dolomite limestone mountain, a summit where vertical walls dominate the various aspects. The rock composition is reasonably solid so that the north face is one of the most challenging big wall climbs in this part of the Alps.

The other sides of Hochstadel are covered with minarets, towers needles - whatever you would expect from a Dolomite summit. Therefore the two normal ascent routes are very popular among the regular non-climbing folks. The east west traverse of the Lienz Dolomites, Drei Törl Weg (= Three Passes Trail) runs along the southern base of the mountain. Therefore the traverse is often done as a three day trekking trail with the ascent of Hochstadel done last.

At the base of the mountain, at 1780m there are two huts and an Alm which all take in hikers and climbers: Unholdenalm, Kalser Hütte and Hochstadelhaus. They can be reached from the village Oberpirkach by a three hour climb. Alternatively you can use the forest road for a one hour drive (11km one way). However, it is advisable to take a "Hut Taxi" since a regular car will suffer quite a lot on the rocky road.

It is actually quite difficult to get reliable information on any of the summits of the Lienz Dolomites. There have been guidebooks and picture books in the past but they have long been out of print. Since Hochstadel's north face with 1300m is the highest in Austria and the third highest in the Eastern Alps I consider it important to have this section on the page. Please let me know of any details (routes, first climbers etc.) you can find.

So far I can contribute the following:


Views from the summit

Hochstadel can be climbed best from the refuges to its east, which you reach from Oberdrauburg in the Drau Valley. Either take car or Hut Taxi to the refuges or follow the mountain road on foot. A steep hiking trail cuts short most of the bends in this road. The trailhead can be reached as follows:

From the West (Brenner Motorway A22)
Leave the Brenner Motorway near Brixen / Bressanone and follow SS49 to the east through Pustertal / Val Pusteria. To the east of Innichen / San Candido you cross the Austrian - Italian border. Here the road is called B100 and heads for the city of Lienz. Drive through the city and on to Oberdrauburg. Here turn right onto a narrow side road to Oberpirkach. The road ends in the village but you can go on on a dirt road after you have crossed two gates. This dirt road leads all the way up to Hochstadelhaus and Unholdenalm (11km one way).

From the North
There are two possible roads:
From the South (Udine)
Take Motorway A23 to the exit Camia Tolmezzo. Follow SS52 north to Tolmezzo where you turn onto SS52 bis. This leads to Plöckenpass, where it crosses the Austro-Italian border. In Austria the road turns into B100 and at Kötschach-Mauthen you need to go straight on to Oberdrauburg and Oberpirkach.

There is no red tape in the area. You can use the road to the refuges but keep in mind that it goes through farmed areas. The road is washed out so your speed will be low anyway. 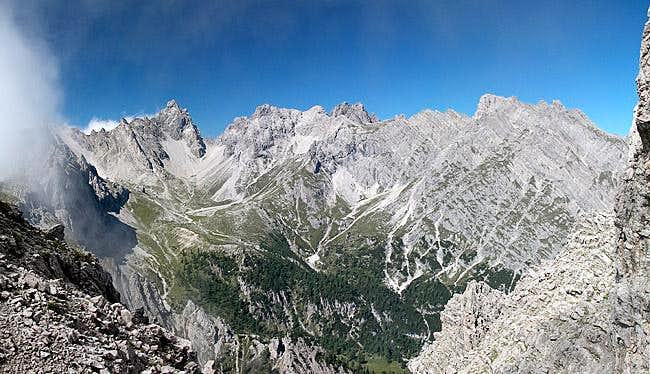 The Garnitzenkar route is possible all year round, in winter as a ski tour. The Schneeklamml Route will certainly pose more problems because of the narrow ledges you have to negotiate at the beginning of the climb. The best season, however is mid June through the end of September. The refuges are open during that timeframe as well.

Free camping on the mountain is discouraged. There are three huts at the base of the climb so it should be not neccesary to pitch a tent. The cities of Lienz and Oberdrauburg are close by so that accommodation should not pose a serious problem. If you are looking for hotel rooms or apartments follow the link below

Hochstadel is located directly on the border between the two Austrian states Carinthia and East Tyrol, so for a weather report look at one of the pages below:.

Maps
I have been using a map by Kompass Verlag, which is very good for the hiking trails though it does not show ALL the relevant summits of the Lienz Dolomites. The group is small and at 1:50000 you cannot show all summits.
Books
You’ll probably not be able to find anything on the Lienz Dolomites in a language other than German. There is not much information on the mountain range. I have used the following book which is available in German and Italian: