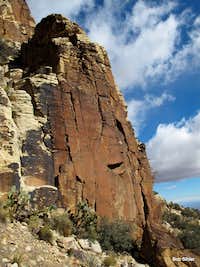 Almost at the very southern end of Red Rock National Conservation Area, Hollow Rock Peak is one of several relatively little-known sandstone peaks outside all the hustle and bustle of the areas adjacent to the NCA's scenic drive. With a scenic, sometimes challenging route to the summit, a class 4-5 summit block, and excellent views, this is a peak to check out, especially for those seeking solitude. Although the peak is less than two miles from a paved road as the crow flies, its isolation from the Scenic Drive and the fact that high clearance, if not 4wd, is recommended for the driving approach provide extra assurance that the masses will not be on or around this peak (unless you are unfortunate to pick the same day one of the local hiking clubs does).

A large crack in the summit block is what earns the peak its (unofficial) name.

Very close to Hollow Rock Peak are the Illusion Crags, a nice climbing area that has been all but forgotten in recent years. In fact, parts of the northern side of Hollow Rock Peak may be part of those crags (not 100% on my climbing crags out here). Here is a picture that will be very useful in helping you locate the crags and their routes. 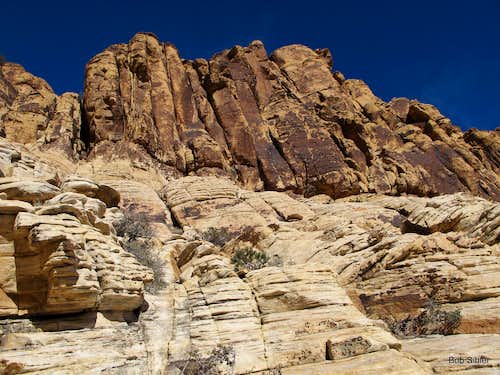 The road immediately bends west, passing that sofa in short order. In about half a mile, there is a junction where a road heads off to the north sharply. Although there is a sign marking this as a designated route, it is very easy to miss it. If you do, you will find that the road gets more and more rugged and eventually ends about a mile from the highway.

So turn right onto that north-heading road and drive a mile or so, using a pullout to park in once you feel you are suitably close to the peak. No point along the road will have you closer than half a mile from the peak, just so you know.

I found different trailhead instructions and route details here. This way sounds a little longer and less challenging, but it has the advantage of not requiring a high-clearance vehicle in order to approach the peak.

RT distance is 4-5 miles, and elevation gain is around 1500'.
If you own Rambles and Scrambles by Courtney Purcell, you should know that there is a less complicated way to the summit than the one he describes. While I have no doubt his beta is correct, I know he was operating without any beta when he climbed the peak. Whether the easier route previously existed and he missed it or it was established since his book's publication I don't know, but there is an easier (in route-finding terms) route from the east side, and that is the one I describe here.

The eastern face of the mountain is split by a wide, obvious break, with the summit block visible directly above it. Tempting though it may be to head straight up that break, don't. There is a wall around halfway up that appears to be "unclimbable." 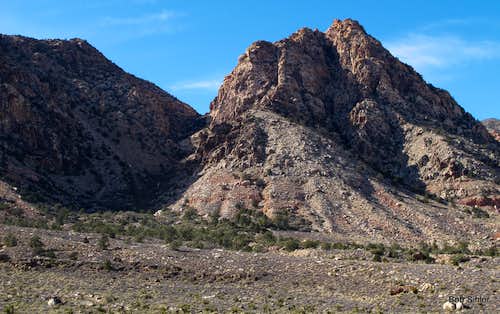 Instead, aim for the southeastern buttress, which is the one to the left of the break. On the left (south) side of that buttress is a canyon that will lead to breaks in the peak's southern cliffs which will allow access to the summit area. 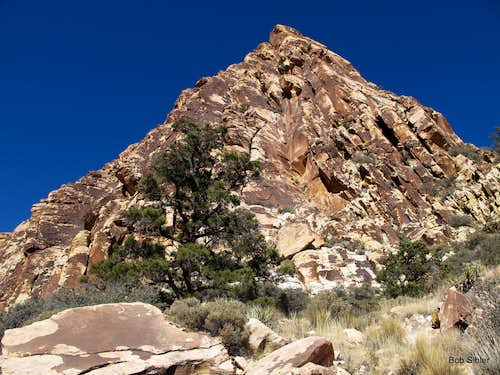 What you want to do is gain the south side of that buttress, staying fairly high. There is an overly cairned use trail that you likely will pick up on that south side at some point. In fact, much of the route is cairned, and just about every cairn is pointless. A couple steer you around brushy difficulties higher up, but anyone with decent route-finding skills would find those workarounds anyway. Only one cairn is actually useful-- the one that marks the exit from the canyon and onto the cliffs.

You might be asking, "Why not just get into the canyon wash where it meets the road and go that way?"

Answer: Parts of the wash are hideously brushy, and why go low when you actually need to stay high?

As you get higher and higher in the canyon and closer to its head and begin wondering if the route is going to take you to the ridge above its head, look for a steep waterfall (likely just trickling or dry, but definitely with a water-stained look if dry) on your right. 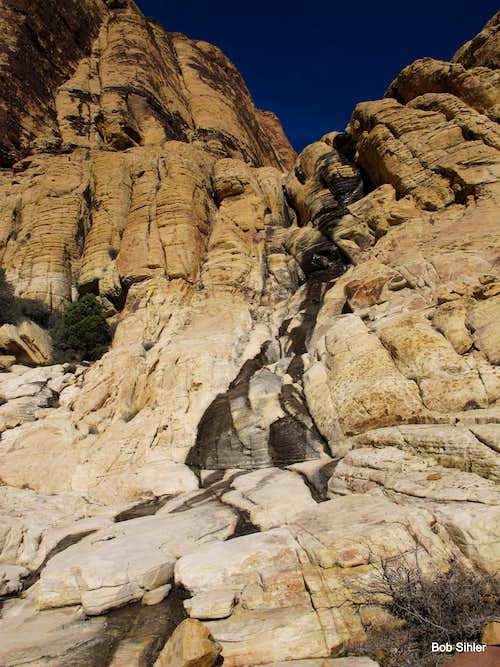 15-20 yards beyond that waterfall is a Class 4 break in the cliffs. There is a large Ponderosa Pine at the base of this break, and this is where the only useful cairn on the entire route is (or was as of January 2013).

Climb up (Class 4) for maybe 100' and then follow easier Class 2-3 terrain up a broad drainage all the way to the ridge above. It's very scenic going here. The summit block comes into view to your right near the top.

Cross the head of a gully (the top of the large break splitting the mountain) and hike over to the summit block. Rambles and Scrambles puts the summit block at 5.2-5.4, but I thought it was Class 4, and so does the author of the source cited in the Getting There section. In any event, the difficulties only last for about 15' and are not very exposed.

If you choose to rappel from the summit block, you will need long slings. The only feasible anchors are the rocks at the very highpoint. 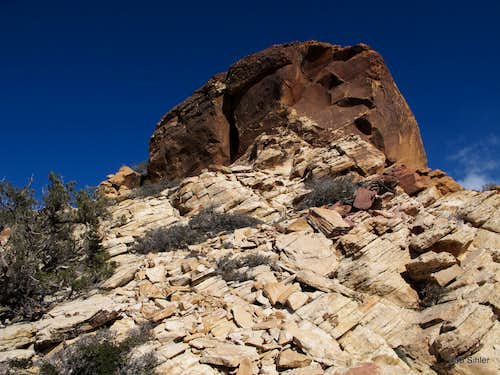 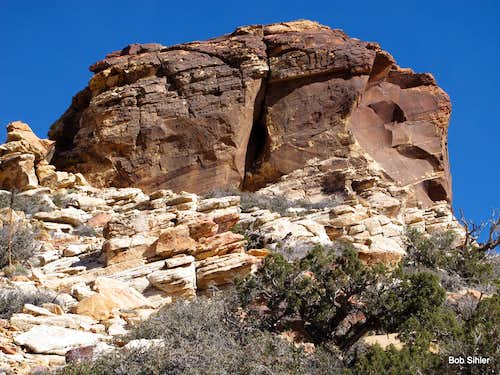 There are some other outcrops in the vicinity that seem to vie for the highpoint honor, especially one just a short distance to the west (it is a quick Class 3 scramble up it), but the one described and pictured on this page, which is also the one with the cairn and register, is definitely the highpoint. 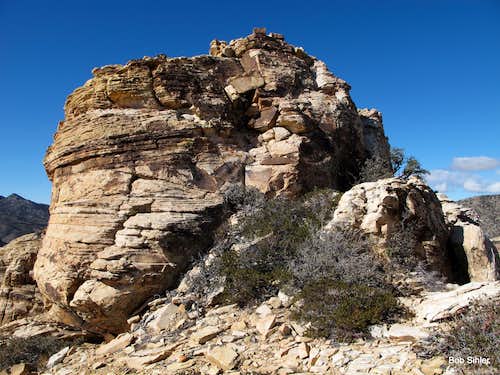 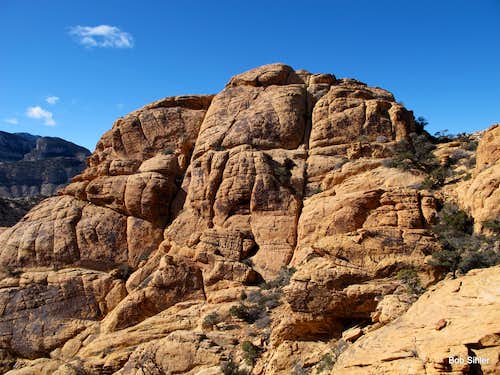 Icy spots are possible in winter, but in general, winter, spring, and fall are the times to climb this peak. Because you spend just about the entire time in the sun, this really is not a good peak to climb in the summer.

Camping in RRCNCA is illegal at the elevations here, though I highly doubt the authorities are going to mess with you (or even come checking) if you just sleep in the car. The nearest developed campground is about 15 miles away, approximately a mile east of the entrance to the Scenic Drive off SR 159.