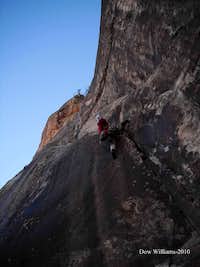 Dogma, 5.11c, V
Horseshoe Wall refers to the second largest wall on Mount Wilson’s impressive east face, second only to the more popular Aeolian Wall (Inti Watana and Resolution Arête). Horseshoe Wall primarily refers to the upper eastern headwall on Mount Wilson, but this beta page includes the lower sister routes, any of which typically need to be climbed to reach the base of Horseshoe Wall which is nick named Sherwood Forest. Several routes cross Sherwood Forest combining both sections automatically (Dogma and Sentimental Journey). Other routes must be combined to make the summit of Mount Wilson. All the routes associated with this wall begin in Willy’s Couloir which is a bushwhack and relatively un-marked approach that ventures south of the main gully below Resolution Arête which separates Horseshoe wall from Aeolian Wall. 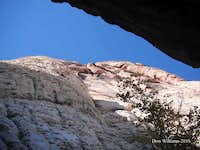 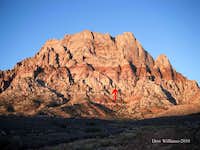 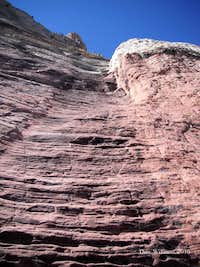 Dogma (V, 5.11c), established by Brian McCray and Mike Lewis, is the premium line on Horseshoe wall to be sure and of course what first drew me to the area. A much more casual route for this area is Pink Tornado Left (5.9+) which is a decent route by Red Rock standards. You can connect either one of the Pink Tornado’s (right or left with Gwondonna Land Boggie (5.10a) to reach the summit of Mount Wilson via a more moderate grade. Sentimental Journey (5.9) is one of the older routes in the park (1970) and follows the easiest line to the summit.

Much is made to do of this rough approach and some written beta is not very clear regarding how to get into Willy’s Couloir. To make it simple, particularly if you have already climbed the more popular routes of Inti Watana or Resolution Arête, ascend White Rot Gully to the main gully below Resolution Arête. Then descend the main gully directly until it is possible to ascend the significant gully to the southwest, Willy’s Couloir. This is a relatively unmarked and bushy approach. You do not have to scramble very far up Willy’s Couloir to reach the base of the Pink Tornado routes. Once in Willy’s Couloir, stay right and ascend to the right base of the large white triangular slab abutting the main wall. However, Dogma is much further up the gully (south) involving a few 5th class steps, one of which is best rapped on return.

White Rot Gully is best reached by parking at the Oak Creek pull-out on Highway 159. Hike towards Mount Wilson on the old Oak Creek Road. Before you get to the Wilson Pimple, turn left and follow the road around the left side of the Pimple. As you descend from a highpoint along the road, locate a faint trail on the left that is cairned as it ascends scree and a faint sandy trail to the base of Mount Wilson. Follow the trail to the left as it leads to a gully requiring 5th class moves to ascend, it is the last gully on the right side at the end of the faint trail. Trend left as you ascend the loose sandy gully into a small cave like feature. Chimney up and out of this hole to a small ridge that separates the main gully below Resolution Arête from the much smaller White Rot Gully. When retreating from this area, you can take several single rope rappels (one 70m barely makes it from the first rap on a tree to the wash below) to make an exit of the main gully without having to down climb White Rot Gully. 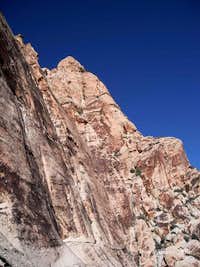 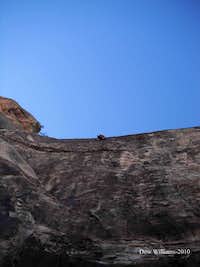 One of my better partners and I hit Dogma up in late October on a cold day and found the upper wall a bit too cold for 5.11 face crimping. We climbed the crux pitch and then retreated down the route which is possible to rappel at any point with a 70m rope. I felt like both 5.11 pitches I got on were fairly stiff one way or the other and advise climbing this route when Las Vegas high temps are at least in the mid 70’s. Photos included below. Dow


There are no bolts on the first two pitches. The first pitch is a decent lead for the grade (5.9). The start off the deck is the crux as you stem and mantel up a closed seam. You continue up a varnished left slanting crack with positive features to just under a roof. It is mandatory to set up a gear belay here as the pro for the next 40’ or so is sub par to non-existent. The second pitch is a long 5.8 pitch. After traversing up and left over the roof continuing with the same crack, you cut back right and straight up a wide crack to a ledge with a fixed belay. The third pitch is the technical crux of the climb but was well bolted in 2015 and not near the difficult lead as the last pitch of the day. That said, it involves some full on face climbing at the grade. Head up the chossy and thin corner (pro is better than it looks) and cut up and left at the top following bolts that meander left and then back right up to a ledge with a fixed belay. This bolted section involves sustained edge climbing on suspect rock. The fourth pitch is uneventful as it traverses left, then up right and then back left again to another fixed belay on a ledge. The fifth pitch reaches the ledge at the first tree on the right. We simul-climbed the fifth and sixth pitches to reach the base of the wide corner. The seventh pitch was a fun chimney/off-width corner with good gear but also a few bolts on the right wall. It can be quite wet at the top from melting snow during the winter months. Tunnel through to the base of the last pitch which is a moss filled right facing corner. The eighth pitch climbs the fragile corner with loose blocks (2015) and poor pro using face features on the right wall. Near the roof, you have the choice of traversing right to a gully or pulling the roof up and left and climbing another 100’ of unprotected mossy 5.7-5.8 ground to a tree on top of the ridge. I chose pulling the roof. Both choices would have serious consequences if you fell. Dow

The first pitch is what draws the “+” on the 5.9 grade from Jerry Handren’s guide book (“hard flakes that are treacherous”). I led the pitch and did not find it as burly as the guide book might suggest. The sandy texture of the short off width start is what the book is referencing with the before mentioned comment. The traverse left into the main corner was via pleasant ground. The continuation of this long pitch to the belay was on good rock at a lesser grade. The second pitch is the best pitch of the route. It follows a finger and hand seam up through a varnished section to just below a small roof. The third pitch is a short pitch that pulls the roof through another varnished section of 5.8-9 climbing. The fourth and fifth pitches were fun 5.7 chimney and stem leads. The sixth pitch just moves the belay to the base of the final headwall below Sherwood Forest. I combined the seventh and eight pitches (5.9) for a full 60m to a fixed station (2010) which allowed us to scramble sans rope the remaining 5th class to just below the Sherwood Forest plateau. That last 5.9 rope stretcher represents the second best pitch of the day. Dow