Hoyt Peak is part of the volcanic Absaroka Range and is located inside Yellowstone National Park, about 8 miles from the east entrance.

The Absoroka Range, at about 175 miles long, extends from southern Montana into northwestern Wyoming, crossing portions of the Gallatin, Shoshone, and Custer national forests, as well as the northeastern portion of Yellowstone National Park.

Hoyt Peak was named for John W. Hoyt (the then and first governor of the Territory of Wyoming) in 1881 by Philetus Norris (the second superintendent of the Park, sometimes referred to as "the most conspicuous figure in its history").

In 1857 he moved to Madison, Wisconsin, where he published the Wisconsin Farmer and Northwestern Cultivator (1857-1867). Active in early Republican party politics, in 1859 he brought Abraham Lincoln to Wisconsin to speak at the state fair in Milwaukee.

Late in 1859, Hoyt was elected secretary and manager of the Wisconsin State Agricultural Society and served in that capacity until 1872. He was instrumental in securing an agricultural college at the University of Wisconsin.

Hoyt represented Wisconsin at the London Universal Exhibition in 1862 and as U.S. Commissioner to the Paris Universal Exposition in 1867. One of the founders of the Wisconsin Academy of Sciences, Arts and Letters, he served as its president (1870-1874).

From 1874 to 1876 he served as a Wisconsin state railroad commissioner.

In 1878, Hoyt was appointed governor of the Wyoming Territory by President Rutherford B. Hayes, and served until 1882. He moved to California in 1885, but returned to Wyoming in 1887 to become the first president of the University of Wyoming, a position he held until 1890.

Then in 1891, he moved to Washington, D.C., where he devoted himself to the promotion of a national university until his death.

The Avalanche Peak Trailhead, where the route begins, is located at a picnic area just east of Elanor Lake on Highway 20 approximately 8 miles east of the east entrance to Yellowstone National Park. There is parking for 10 or so vehicles but there are no restroom facilities.

Be aware that besides a fee for entering the park, there are restrictions on where you can go inside the Park and what you can do once you enter.

There are plenty of camping areas both inside and outside the Park. The closest campground (over 400 camp sites) inside the Park is located at Bridge Bay. If you want to be assured of a site, make reservations. There are campgrounds outside the east entrance close to Pahaska Tepee, Wyoming and several more farther east toward Cody, Wyoming along Highway 20. Information about those campgrounds can be obtained from the website for the Shoshone National Forest.

For those who don't wish to camp but would still like to stay close to the trailhead, there is a lodge just outside the east entrance at Pahaska Tepee. I've stayed there and it's not too bad if you're not looking for the height of luxury. The food is good, too. In my mind, that counts for a lot.

There are bears, both Black and Grizzly in the Park. Plenty of information is available about bears from the Park Service and here on SummitPost Black Bear and Grizzly Bear articles.

It makes sense to check out the available information before you hike or climb in the area.

The track to the summit of Hoyt Peak is pretty simple, so I'm not going into elaborate detail (for a change).

Begin at the trailhead for Avalanche Peak and hike in a northerly direction up through the fairly open woods on the Avalanche Peak Trail. The trail is steep enough so that if you get in a hurry it will test your stamina and ability to breathe.

Once you reach the bowl (below the saddle on the connecting ridge between Avalanche and Hoyt peaks), look to your right (east) for a faint track leaving the trail. Follow that trail toward the saddle.

If you lose this track, it's not a big deal. The woods of mostly Whitebark Pine is not particularly thick, so just keep heading toward the ridge-crest which you should be able to see quite clearly.

Hoyt Peak is to your right (southeast) so veer that direction if you want, just not too much because you want to end up right on the crest of the ridge where there is an obvious track most of the way to the summit. Besides, if you stay on the crest, you minimize side-hilling and the wear-and-tear that puts on your feet.

Once you reach the ridge-crest and find the climbers' trail toward the summit, follow the obvious track upwards to the southeast.

As you near the summit you will find a rather large rock outcrop blocking the ridge. You can either climb over it (Class 3) or follow the obvious track around the base of the outcrop on the right (southwest) side (Class 2). Some may find the exposure while climbing over the outcropping too much. If that's the case for you, just follow the lower track where there is no exposure.

From there, it's a simple matter of following the rather well-worn track along the ridge-crest the remainder of the way to the summit.To descend follow the above route in reverse.

Hoyt Peak is generally climbed after snow has melted off the route, though the route appears to be doable any time of year.

If, like many, you want knock off Avalanche Peak too, once you've descended to the connecting saddle, follow the existing track (well-worn in most places) around the bump on the ridge between you and the Avalanche summit. Though there are faint tracks traversing the southwest side (your left) of this bump, the best route circumnavigates the bump on the right (northeast side).

After passing the bump, you will see a clearly-defined trail leading the rest of the way to the summit of Avalanche Peak.

Descend from Avalanche Peak along southwest ridge, returning first past the connecting saddle to Hoyt Peak, then to the trailhead where you began.

The total mileage for this "double" is about 6.4 miles.

I've heard some folks want to rope up going through a section of rock on the ridge close to the summit. Personally, I didn't see the need. The climbing through that section is at most upper Class 3 with what some may consider a bit of exposure. However, there is clearly-defined trail around the southwest side at the base of this rock outcropping that eliminates any exposure.

In my opinion all that is needed for this route are sturdy hiking boots plus fluids and a bit of food. Of course, that only holds true during good weather.

When snow conditions exist, you'll need appropriate clothing and an ice axe. I did not see any sections of the route I took which would require crampons, though I admit, if you decide to bushwhack straight up the mountain from the road (something I don't recommend) they may be in order.

A Further Point of Interest 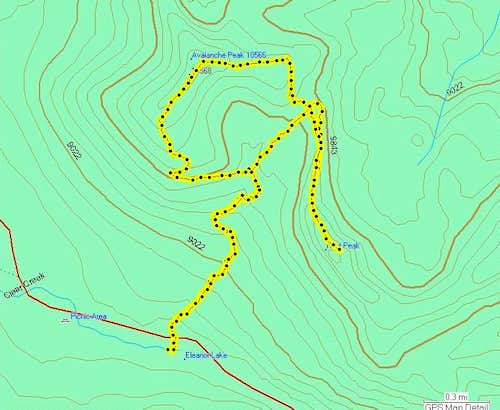 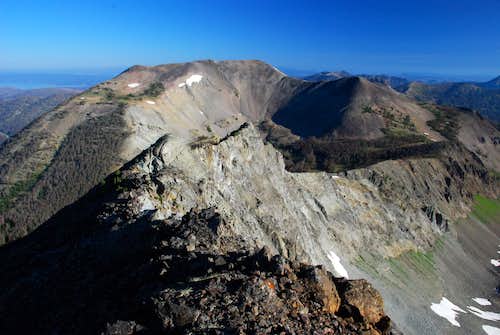