Hrubý Jeseník (High Jesenik), which is called Hohes Gesenke or Altvatergebirge by Germans and Wysoki Jesionik by Poles, is the highest mountain range in the Eastern Sudetes/Jeseníky. It lies in the territory of the Czech Republic, namely in the north of Moravia, between the Rychlebské Mountains to the northwest, Zlatohorská vrchovina/Góry Opawskie (Zlaté Hory Highlands/Opava Mountains) to the northeast, Nízký Jeseník (Low Jesenik) to the southeast and Hanušovická vrchovina (Hanušovice Highlands) to the southwest. The roughly Y-shaped area (530 sq. km) of Hrubý Jeseník is made up of three mountain groups:

Hrubý Jeseník is composed mostly of ancient gneisses and schists with admixtures of quartzite, marble and other rocks. The sides of its massifs can be very steep whereas the crests are broad and rather flat. The highest summits rise a little above timberline. In a few places there are faint traces of small Pleistocene glaciers, the most distinct of them being the corries on the eastern side of Vysoká hole (Velká kotlina/Velký kotel) and Červená hora (Sněžná kotlina).

The table below features Hrubý Jeseník summits that have both an elevation of over 1200 m and a prominence of at least 100 m.

The main ridge of the High Jeseník forms the backbone of the Praděd and Keprník groups. Its south end is the saddle of Skřítek at 874 m, from which it runs north-northeast to Vysoká hole, the second highest summit in these mountains. Before Vysoká hole, at the summit of Velký Máj, the huge lateral ridge of Mravenečník branches off the main ridge to extend to the northwest. Its very top, Dlouhé stráně, contains the upper reservoir of a pumped-storage hydroelectric plant (please see chapter 6). To the north of the summit of Vysoká hole, its secondary summit, Petrovy kameny (1446 m), is topped with an interesting group of rocks. Just over two kilometers north of the summit of Vysoká hole is the highest summit of Hrubý Jeseník, Praděd, with a modern, 162 m tall communications (and observation) tower. From Praděd the main ridge runs north-northwest to Malý Děd, where it takes a turn west-northwest towards the pass dividing the Praděd Group from the Keprník Group. The pass, Červenohorské sedlo, has an elevation of 1013 m and takes its name from nearby Červená hora (Red Mountain) in the Keprník Group.

Orlík (right) seen from Medvědí vrch
Medvědská hornatina (whose Polish name is Masyw Orlika, after the second highest summit in the group, Orlík at 1204 m) connects to the Praděd Group via the pass of Vidly (Videlské sedlo) at 930 m and is divided from the Keprník Group by the valley of the Bělá River. It is more or less equal in area to the Keprník Group, but it is over 200 m lower and does not rise above the tree line, which results in it being far less attractive to the hiker (although its woods hide several ruins of small medieval castles, which might be of interest to some). In fact, its most visited corner sits far away from its highest summits (devoid of waymarked trails) and is completely flat, since it is a peat bog by Rejvíz pass at the north end of this mountain group. Rejvíz pass separates the Medvědí vrch Group from Zlaté Hory Highlands, which used to be called the foothills of the High Jesenik. 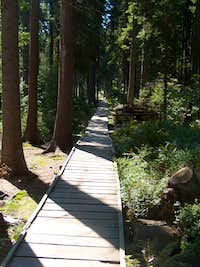 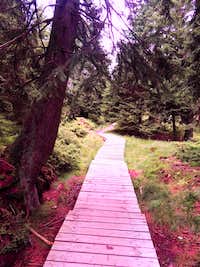 Hrubý Jeseník, along with adjacent swaths of Hanušovická vrchovina and Zlatohorská vrchovina, is protected as a CHKO, i.e. Chráněná krajinná oblast (Protected Landscape Area), which contains four national nature reserves (národní přírodní rezervace), nineteen nature reserves (přírodní rezervace) and seven nature monuments (přírodní památka).
In a CHKO camping and fires are not permitted except at designated places (of which there are none in Hrubý Jeseník). Bivouacking is not explicitly illegal as long as there are no prohibition signs and you leave no trace. Entry to national nature reserves and nature reserves can be forbidden and if it is allowed you will have to stick to the waymarked trail. For example, you must not approach Petrovy kameny and Velká kotlina can only be seen from the interpretive trail which skirts its bottom.
National Nature Reserves 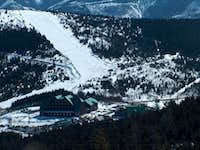 Hrubý Jeseník lies in the north of Moravia, very near the border between Czechia and Poland. In fact, its northern reaches are part of Silesia and used to belong to the Bishops of Wrocław (the capital of Lower Silesia, southwestern Poland). However, these days the area is hardly accessible by public transport from Poland.
Czech trains and buses
Czech Railways can take you to the fringe of the mountains (please click on the map in the above chapter), buses also traverse them via road no. 44, which runs across the main ridge through Červenohorské sedlo (1313 m), and road no. 450, which links the outskirts of the town of Jeseník (boasting the Priessnitz Health Resort) to the exquisite spa village of Karlova Studánka. (As far as spas are concerned, there are two more on the fringe of Hrubý Jeseník: Lipová-lázně and Velké Losiny.) From Karlova Studánka, by bus (but not by car) you can get as far (and as high) as the little resort of Ovčárna, which sits at 1300 m, less than four kilometers away from the summit of Praděd along the same tarmac road.

NB There are plenty of guesthouses and hotels as well as a few campsites around the High Jesenik. 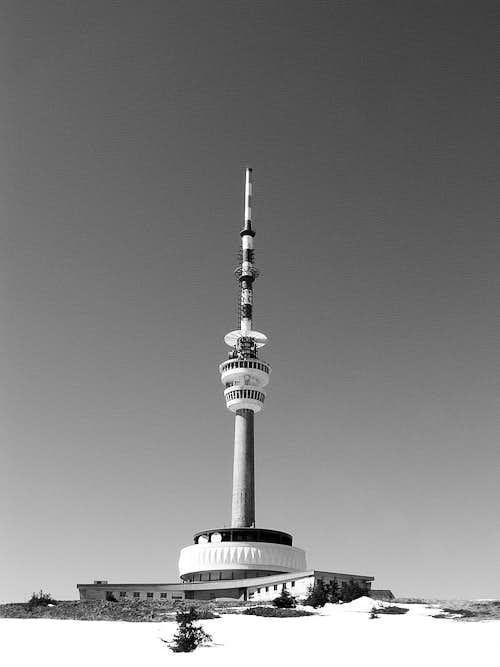 On the summit of Praděd, there is a TV tower, 162 m tall, with an observation platform. The top of this tower is the highest (despite not being natural) point in the Czech Republic. Please see the Praděd page for more information.

The pumped storage hydroelectric power plant Dlouhé stráně was built in 1996. The upper reservoir on the top of Dlouhé stráně mountain at 1350 m, with a capacity of 2.7 million cubic meters, is connected to the power plant by two feeders (1547 m and 1499 m long). The power plant is connected to the lower reservoir by two tubes 5.2 m in diameter each (354 m and 390 m long). The lower reservoir (3.4 millions cubic meters) is located on the Divoká Desná River. The power station is located inside the mountain. It has the largest reverse water turbines in Europe, the biggest gradient in the Czech Republic (510.7 m) and it is the most powerful power plant in the Czech Republic (2 x 325 MW). 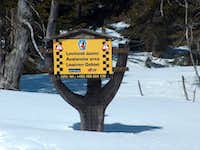 This page was first created in 2007 as a 'Jeseníky' page and dealt with all of the Eastern Sudetes. Ten years later it was rewritten and converted into a Hrubý Jeseník page, so that it went better with its parent and children pages.

Thank you guys, I really appreciate that you are taking care of this page.

Gorzi, beware, perhaps Jatsek will rename one day your page "mountains of the world" ;)

The Jeseniky is just a Czech name for the Eastern Sudetes (the author of this page is Czech). You are welcome to create pages for any of the sub-ranges but please don't marry the Hruby Jesenik to the Nizky Jesenik - that'd be another unhappy marriage :)

OK, far as you don't merge in it the Carpathians :D